A van has run over dozens of pedestrians on the Rambla in Barcelona near the city's famous Plaça Catalunya this Thursday afternoon. The area is one of the most popular with tourists in the Catalan capital. The vehicle has left at least 13 dead and around 80 injured, 15 seriously, according to the latest official statement. The vehicle zigzagged along the avenue in the direction of the Christopher Columbus statue causing a stampede as people tried to run away. Daesh has claimed the attack through the Amaq agency, their usual means of communication. One of the attackers has been shot, another arrested and a third has escaped.

The Mossos d'Esquadra, the Catalan police, have confirmed that it was a terrorist attack which has led to Spain's National Audience court taking on the investigation. One of the attackers that had escaped has died in an exchange of fire in Sant Just Desvern, a small town neighbouring the city, after escaping a police checkpoint on avinguda Diagonal in Barcelona.

At around 5:05 this afternoon the vehicle started its attack from plaça Catalunya at the top of the Rambla and slalomed down the street to the mosaic by Joan Miró outside the famous Boqueria market, around 600 metres. The lone driver abandoned the van and fled on foot.

The Mossos have denied earlier media reports that he then barricaded himself in a bar in the centre of Barcelona. 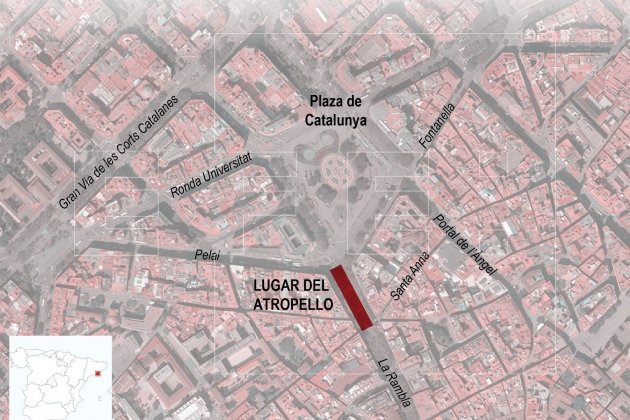 The suspected attackers had rented two vans, one with which they had carried out the attack, and the other they planned to escape in. This second vehicle did manage to get away, and after the Mossos asked for help from the public it was found in Vic, a town about an hour away from the city.

Earlier identified as one of the attackers was Driss Oukabir, of North African descent who lives in Ripoll, a town in the north of Catalonia, beyond Vic. According to police sources, he collected the rental van in Santa Perpètua de Mogoda, a small town 18km from Barcelona. He has a prior police record.

It has since been announced that he has gone to the Mossos d'Esquadra station in Ripoll to deny any involvement in the attack. He says the terrorists had robbed the ID that they used to rent the van. He is being held in the station regardless.

Numerous ambulances have arrived at the scene and businesses have closed their shutters. The area has been cordoned off and the metro and trains stations in plaça Catalunya, as well as the RENFE train station in passeig de Gràcia nearby, have been shut for security reasons.

The Catalan president, Carles Puigdemont, and the mayor of Barcelona, Ada Colau, who were both on holiday, have returned to the city. Also back is Catalan minister for the Presidency, Jordi Turull, who was in a meeting when he was informed of the events. The Spanish prime minister, Mariano Rajoy, his deputy, Soraya Sáenz de Santamaría and the Spanish Interior minister Juan Ignacio Zoido are also en-route to Barcelona.

Since July 2016, vehicle attacks have been the weapon of choice of Islamic militants in Europe, which has led to the deaths of around a hundred people in Nice, Berlin, London and Stockholm.

This is the second attack Spain has suffered at the hands of Islamic terrorists, thirteen years after 192 died in an explosion of 11 bombs almost simulatneously in Madrid on 11th March 2004. That was the worst such attack in Europe.

According to Spanish newspaper El Periódico, the CIA warned the Mossos two months ago that Barcelona, and the Rambla specifically, could be the scene of a terrorist attack like the one that has taken place this Thursday afternoon.