Spanish pressure to silence independence movement at the UN 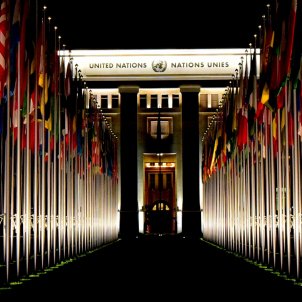 The Catalan independence movement and the repression it faces from the Spanish state have been taken before the last two regular sessions of the UN Human Rights Council and could return in the next regular session to be held in September. This is despite the pressure from Spanish diplomats, who have tried to prevent Catalonia from being able to take its claims to the international body.

Catalonia came before the council for the first time with a speech by MEP Jordi Solé, who defended Catalonia's right to self-determination and denounced the "disproportionate and horrible" violence seen during last year's referendum and the existence of political prisoners in Spain. It returned this Tuesday, through lawyer Jordi Palou. In the name of the relatives of the prisoners and exiles, he denounced the actions of Spanish justice in the investigation of the circumstances surrounding the referendum.

It's not easy for Catalonia to have a voice at the UN, not being a state, but the pro-independence cause has a backer: the Association Bharathi Centre Culturel Franco-tamoul (Bharathi CCFT). One of the small NGO's main aims is to defend the right to self-determination. It has shown sensitivity to the case of Catalonia, offering part of its speaking time before the Human Rights Council.

It did so despite the obstacles and pressure from Spain. In March, they had to avoid pressure from Spanish diplomats by hiding the speaker's name on the agenda to avoid it being vetoed. Spanish diplomats didn't know that the case of Catalonia would come up until Solé had started his speech. When they realised, the Spanish representatives in the room appeared angry and even asked for a turn to reply.

"If there is more pressure, we'll report it"

Speaking to El Nacional, one of the NGO's officials said that, following the first speech, the monitoring and pressure from Spain faced by the organisation increased. The source says that following Solé's comments, Spanish diplomats went to speak with them, saying that the case has nothing to do with the rights of the peoples the organisation defends, that they cannot be compared because "people aren't dying" in Catalonia. They also say they were interested as to who was behind the association and what links they have with Catalonia.

After Tuesday's speech, the official says, the pressure wasn't as strong and Spanish diplomats -who for the moment haven't been replaced since Mariano Rajoy's government fell- avoid showing their anger at the lawyer's speech, simply asking the NGO for a copy of his remarks. "This week or next they'll come to speak [to us]," they say. The NGO, however, says they're used to pressure from states and won't let it interfere with their work. Moreover, they say that if they face any further pressure, they'll "report it" to the relevant UN bodies.

"By bad luck, Catalonia has no presence here [at the UN], but we're prepared to give them the opportunity to speak," they say. They add that they could give them another such opportunity in the next regular session of the Human Rights Council, in September, and by organising other events. Bharathi CCFT's objective is "to give a voice to all people who suffer occupation" and, as such, "support the Catalan cause". A member of the organisation visited Catalonia on 1st October last year to watch the referendum.

The organisation started in 2014 to strengthen cultural exchange, cooperation and communication between France and the Tamil people in India, Sri Lanka and other countries. Among their objectives are the "promotion of human rights, non-violence and peaceful solution of conflicts" and the defence of the right to self-determination. This includes defending the specific cases of Western Sahara, Quebec and Catalonia. 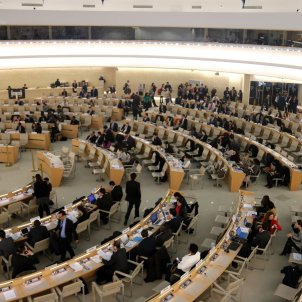 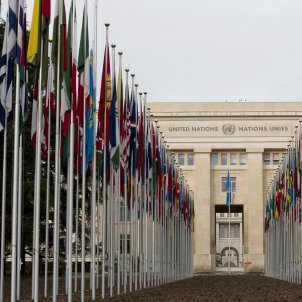