With most of the indicators for Catalonia's fifth wave of the coronavirus pandemic having fallen to levels not seen in months, the government has decided to relax its restrictions and lift all those measures that affect fundamental rights. Thus, the limit of ten people set for social gatherings will be lifted this Friday 10th, as government Patrícia Plaja announced today.

Likewise, restrictions affecting freedom of worship will also be removed and there will no longer be maximum capacities for spaces used for religious ceremonies. On the other hand, the government is maintaining the closure of the nightlife sector, but hopes to open it "as soon as possible."

One of the factors that will allow the opening will be the reduction of people admitted to intensive care units to less than 100. There are currently 316. "It is one of the points to consider to be able to carry out the re-opening," she said.

No information about La Mercè

"We understand, respect and share the discomfort of a sector which has been severely hit, but unfortunately the circumstances to carry out this reopening do not yet exist," said Plaja, adding that the government is the "first one interested" in reopening the nightlife sector.

She would not speculate whether the reopening could be before Barcelona's Festes de la Mercè, on 23rd September, as requested by the Barcelona city council. According to the spokesperson, the situation is being assessed "weekly" and it will be necessary to see the impact of the start of the school year in order to make a decision.

In response to an earlier statement by the public health secretary, Carmen Cabezas, that the Catalan executive had asked Madrid to work for the implementation of the so-called Covid passport, Plaja denied that this is on the agenda. The "passport" - the EU document proving Covid vaccination or immunity status - is required in countries such as France and Portugal for admission to bars and cultural events, but the Catalan government believes it is discriminatory: "No measures will be taken that could discriminate against anyone." On the other hand, Plaja confirmed that work is being carried out on methods to ensure that those who have not yet been vaccinated will do so. In this regard, Cabezas has announced cultural discounts to encourage vaccination among young people.

The government spokesperson reminded the public that vaccine shots are available to all age groups and people who have not yet had their two jabs. “For individual and collective responsibility, let’s get vaccinated,” she encouraged. She also noted that the refrigerators are "full" and that after the summer holidays there has been a relaxation when it comes to the speed of vaccination by the public. 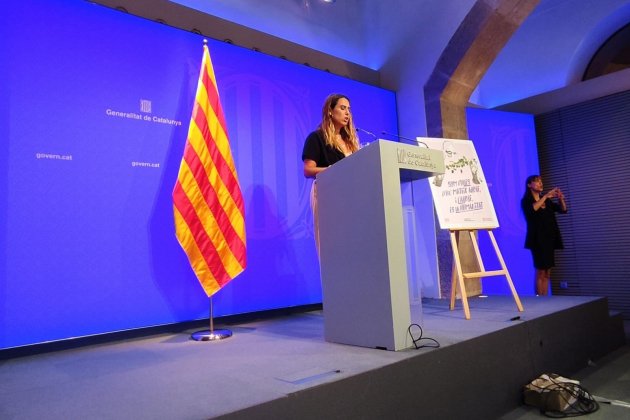 With regard to maximum permitted occupancies, the government is studying increasing the capacity for sports venues of more than 10,000 people from 30% to 40%. The Procicat committee is currently evaluating the measure, while working on the "small print" of the resolution that will be passed this Friday. In this regard, it should be noted that as there will no longer be any restrictions that affect fundamental rights, the government will not need to request endorsement from the High Court of Catalonia, and introduction of the measures will thus be guaranteed.

The lifting of these limitations comes as epidemiological indicators are improving. The EPG outbreak risk in Catalonia is finally about to drop below the high risk threshold (100) and become "moderate". The total of Covid patients in Catalan hospitals have dropped below 1,000 and number in ICUs continue to fall. And finally, although vaccination rates have slowed, the total is edging upwards, and almost 70% of Catalans are fully vaccinated.

coronavirus What percentage of Catalans have received Covid vaccines in each age group? El Nacional