With two weeks until the new school year begins in Catalonia, key new protocols are being announced for this second Covid-affected return to classes. In particular, students who have received their full Covid-19 vaccination - two shots, in most cases - will not go into confinement even if they are close contacts of a positive case in their classroom bubble group. Naturally, the person infected will have to isolate, but unlike last year, in-person classes will be able to continue for other students that are fully vaccinated.

This was announced by the Catalan education minister, Josep Gonzàlez-Cambray, in a press conference focusing on the start of the school year on 13th September, at which it was also announced that schools will open with 100% of classes being face-to-face and that the compulsory use of masks at schools will continue. With masks on, it will be possible for common areas in school patios and playgrounds to be shared between different classroom bubble groups. However, in situations where there is only one stable classroom bubble using a space, the mask may be dispensed with.

With this background, both the education minister and his health ministry colleague, Josep Maria Argimon, reiterated the need for students to be vaccinated for the start of the school year. "There are two weeks left, it's time to get jabbed," said Gonzalez-Cambray.

For his part, Argimon noted that if "last year we were able to carry out two million diagnostic tests in schools," this year "we have to be able to administer two million doses" of Covid-19 vaccines. However, the health minister clarified that the vaccination shots themselves will not take place in schools: families who want to vaccinate their children will book a day and time in the usual way. “We will not bring mass vaccination into primary or secondary schools,” he confirmed.

Returning to the prevention measures to be applied at the start of the new term, the ministers affirmed that these will be maintained for at least the first term, which runs until Christmas. Then, if the epidemiological situation has improved and sufficient progress has been made with vaccination, the measures could be changed. But now, the measures will not be "relaxed", but rather "adapted," as the education minister put it.

There are more announcements too: the staggered times for arrival and departure from school gates will continue, but unlike last year, there will be no ten-minute intervals between groups nor will temperatures be taken. This will allow parents to access the school centres with their children. As for parents, they will also be able to meet with teachers in a "hybrid" format (face-to-face and online). School parties will take place outdoors, but it will be possible to hold them inside the centre if it is “with the stable classroom group,” detailed Gonzalez-Cambray. 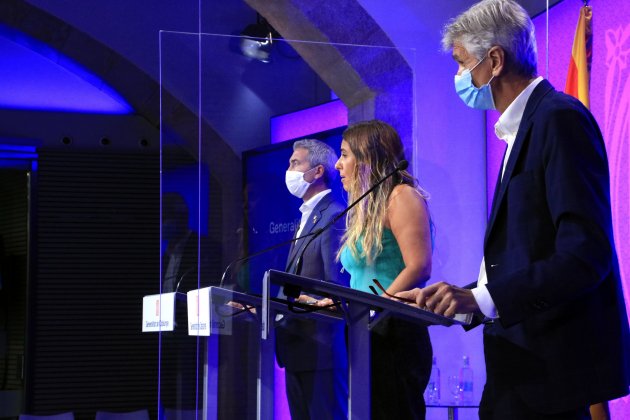 On vaccination, the health minister announced that "90% of the staff of the centres" are already vaccinated, but that "we have 160,000 young people between the ages of twelve and fifteen who have not yet started vaccination." The government spokeswoman, Patrícia Plaja, called on families to book a date and time today, as there are many appointments available.

Likewise, Argimon reiterated his concern with the vaccination of the 40-to-49 age group, in which more than twenty per cent who have yet to receive a first jab. This age group is important because they are very prone to complications with covid-19.

coronavirus What percentage of Catalans have received Covid vaccines in each age group? El Nacional