On the third attempt, they've passed the exam. Barcelona and its metropolitan area, as well as the Community of Madrid, will enter Phase 1 of the Spanish government's lockdown de-escalation plan on Monday 25th May. The Spanish health ministry has confirmed this, after these territories, the worst affected by the coronavirus in the Spanish state, have spent the last three weeks in Phase 0, the preparatory stage of the four-phase journey. Over the last week, some measures have already been made more flexible, in changes that were labelled informally as "Phase 0.5" - especially with regard to retail stores, which have this week been able to open for the first time without customers having to make an appointment.

Thus, Barcelona city and the two health districts which make up its metropolitan region, north and south, will all progress to Phase 1, and they will thus join the health areas of Lleida, Girona and Central Catalonia and the counties of Garraf and Alt Penedès, which will all continue in phase 1 for at least another week. Meanwhile, the other three health districts of Catalonia will take a further step forward: the two southernmost parts of Catalonia, Terres de l'Ebre and Camp de Tarragona, along with the mountainous Alt Pirineu-Aran in Catalonia's north-west, will progress to Phase 2 from Monday. For more detailed maps and information on what's possible in each Phase, see our de-escalation guide.

The most controversial case has been that of the Community of Madrid, which has been demanding a change of phase for three weeks despite being the most severe focus of the pandemic in Spain. It was third time lucky for the Madrileños too, but on the way there were resignations of regional health leaders, who considered that the health criteria had not been met, despite the political calls for a hurry-up. The regional government under the PP's Isabel Díaz Ayuso has announced that it will take the Spanish Ministry of Health to court for its extended red light to Madrid.

The nine provinces of Castilla y León will also move to phase 1. Previously the community was a patchwork, with its relatively-small health districts divided between Phases 0 and 1; now it has changed territorial units to the larger provinces, and all now enter in the initial stage of the four-phase plan.

A long list of territories - almost all of those which have already spent two weeks in Phase 1 - are expected to enter Phase 2 on Monday, which at the moment is only being enjoyed by the islands of Formentera, El Hierro, La Graciosa and La Gomera. As of Monday, these four islands will be joined by all the rest of their archipelagos the Balearics and the Canaries, as well as the following territories: Basque Country, Navarra, Galicia, Asturias, Cantabria, La Rioja, Aragon, Extremadura, Andalusia, Ceuta and Melilla and two provinces of Castilla-La Mancha (Toledo and Guadalajara). In the case of Andalusia, all provinces except for Granada and Malaga will progress to Phase 2.

For the moment, the only exception is the Valencian Country, another region which had been a patchwork of Phase 0 and Phase 1 areas for the first week of the deescalation plan. Now, after a small resurgence in infections, the health authorities have not requested a move to Phase 2 for the health departments which have already spent two weeks in Phase 1. 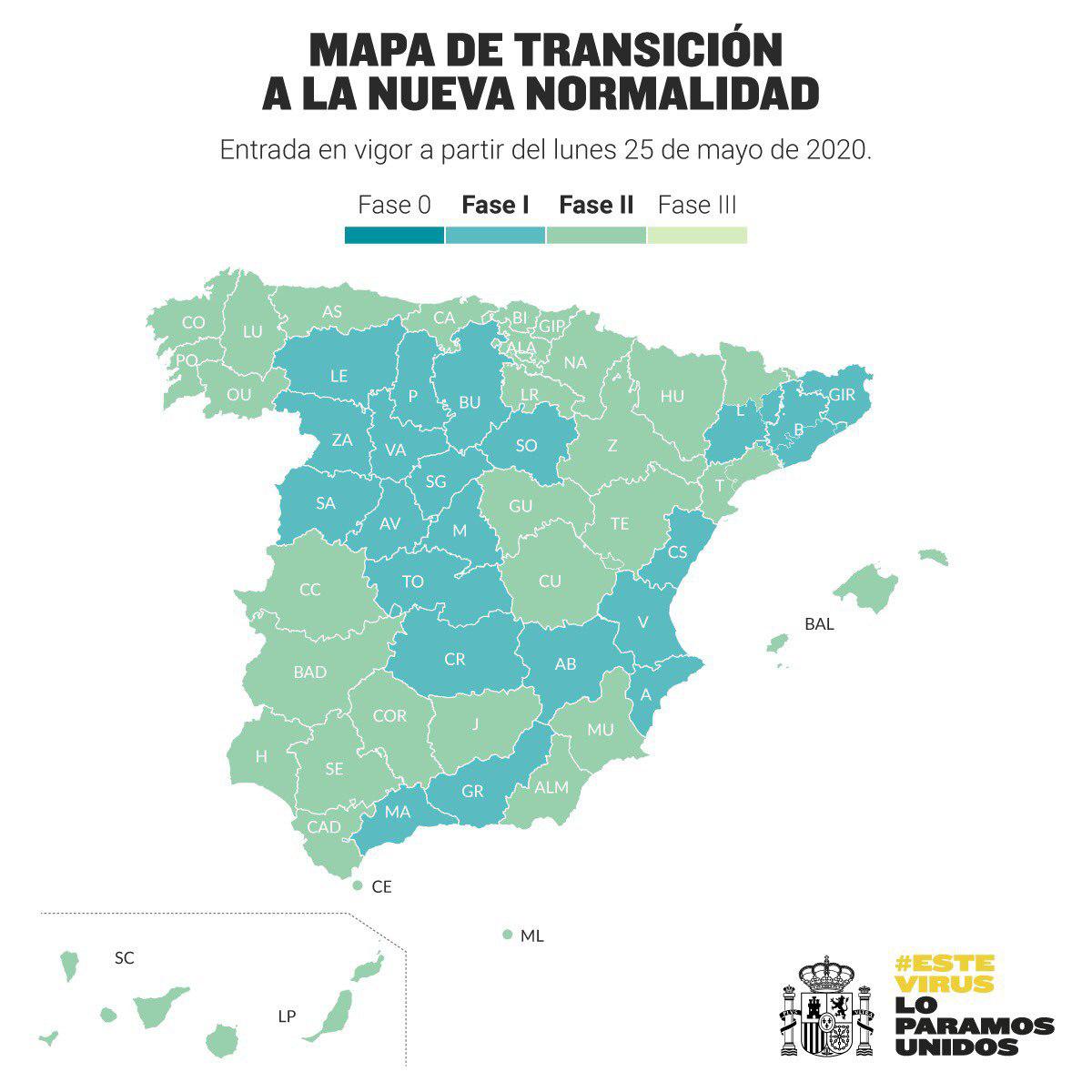 Madrid's appeal to the Supreme Court

Community of Madrid president Isabel Díaz Ayuso has taken her battle to court. As reported on Wednesday, the Madrid regional government will file an appeal to Spain's Supreme Court against the Ministry of Health's earlier denial of its change to Phase 1. Díaz Ayuso's executive considers that "the resolution did not comply with technical criteria applied homogeneously throughout the territory." It also says it has no "evidence" that there was any report that justified the first rejection.

GUIDE | Coronavirus de-escalation: which phase am I in and what can I do?

MAP | Coronavirus infections in Catalonia by municipalities and neighborhoods

T'ha fet servei aquest article? Per seguir garantint una informació compromesa, valenta i rigorosa, necessitem el teu suport. La nostra independència també depèn de tu.
Subscriu-te a ElNacional.cat
Coronavirus A de-escalation guide for Catalonia and Spain | What phase are we in, and what can we do? Maria Macià

Coronavirus Spain's compulsory mask rules: what type of mask, and when is it needed? El Nacional