Senior officers of Catalonia's Mossos d'Esquadra police force and political leadership this morning walked out of a Civil Guard ceremony. They were protesting what Catalan interior ministry sources have described as "affronts" to the Catalan police in the speeches by Félix Vicente Azón, the gendarmerie's director general, and Pedro Garrido, its senior officer in Catalonia.

The situation has increased the tension between the two forces just days before the anticipated publication of the verdicts by the Supreme Court against pro-independence leaders and the protests being planned in the case they are found guilty, as is expected.

Indeed, the Mossos have held several meetings with Spanish police, both the Civil Guard and the National Police Corps, in recent days to coordinate security with respect to the expected protests. The Spanish interior ministry has already sent extra officers to Catalonia in preparation.

Among other political officials and senior Mossos, the event was attended by the general secretary of the Catalan interior ministry, Brauli Duart, the Mossos' director general, Pere Ferrer, and their chief commissioner, Eduard Sallent. They all walked out when they interpreted as being offensive certain allusions made to the Mossos chief facing trial for the 2017 referendum, Josep Lluís Trapero, and superintendent Teresa Laplana, Catalan government sources have told El Nacional.

Trapero and Laplana coordinated the Mossos force that covered the Civil Guard's search of the Catalan economy ministry on 20th September 2017, for which they're both facing charges of sedition. That search was ordered by judge Juan Antonio Ramírez Sunyer, who was posthumously decorated in today's ceremony.

Also at the event was Javier Zaragoza, one of the four Supreme Court public prosecutors involved in the trial of pro-independence leaders, who effusively greeted a number of the Civil Guard officers. Similarly present were the Spanish government's delegate to Catalonia, Teresa Cunillera (PSOE), and politicians like Congress delegate Cayetana Álvarez de Toledo (PP). 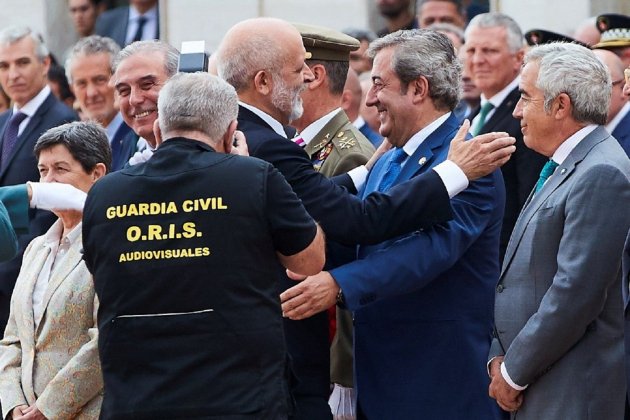 Sources have told this newspaper that the officials believed some of the remarks from Azón and Garrido were "clearly offensive" towards the former senior leadership of the Mossos. The ceremony was to commemorate the gendarmerie's patron, Our Lady of the Pillar.

In his speech, director general Azón said that the gendarmerie will take "all the necessary measures" to avoid the Catalan Parliament's motion for them to withdraw from Catalonia having any effect.

He also congratulated his officers for the arrests of the seven members of the Catalan Committees for Defence of the Republic accused of terrorism, the so-called Operation Judas. He said they had "avoided greater evils which fortunately will now never come about."

Garrido also said the Civil Guard had contributed to laying the groundwork for the upcoming sentences with its "objective, rigorous and exhaustive investigation". As for Operation Judas, he said: "This brilliant intervention confronts us all with the truth that the so-called revolutionary smiles [of the "Revolution of Smiles", as the independence movement is sometimes called] turn, easier than one could think or want, [...] into rictus grins capable of generating destruction, pain and suffering."