This is part of El Nacional's complete primer on the Catalan independence trial. See also our who's who of defendants, lawyers and judges, who's who of witnesses, timeline of how we got here and guide to what to expect now.

Catalan what? Puigdemont who? Independence why? As the trial of 12 pro-independence Catalan leaders gets underway in Spain's Supreme Court, El Nacional offers an English-language backgrounder on a complex court case that could mark the future of Catalonia, Spain, and even Europe. Eight questions answered to provide some of the backstory. And no, Carles Puigdemont is not part of this trial, but he's obviously part of the background to it. See below.

A huge court case is getting underway in Spain’s Supreme Court, in Madrid. Twelve people, ten of them pro-independence Catalan politicians, and two others, leaders of major pro-independence civil groups in 2017, are accused of a series of offences including rebellion and sedition, related to the political crisis centred on Catalonia. Prosecutors have called for sentences of up to 25 years. Hundreds of witnesses will be heard. The trial is expected to take around three months.

2. Is this trial really about Catalan independence, the 2017 referendum, or what?

The Catalan independence issue forms the background to the trial, while the referendum on independence from Spain, held by Catalonia on October 1st, 2017, in defiance of the Spanish authorities, was the event that brought the independence question to a crisis point. Some of the charges in the trial relate specifically to the referendum (disobedience of court orders banning it, and misuse of public funds to finance it), but the most serious charges, rebellion and sedition, are based on an interpretation of the broader independence process – in particular, claiming that the events of 2017 made use of insurrectional violence and disorder, aspects which neutral observers say were conspicuously absent.

This in turn leads many to conclude that the trial is political, aimed at taking revenge against Catalan independence and eliminating it as an acceptable political option, thus leading to the claim that it is really Spain’s democracy which is on trial. Others reply that independence was simply against the Spanish Constitution and therefore those who seek it by means outside the constitution deserve to be punished.

3. So if the trial originated in the push for Catalan independence, where did that originate?

This is a huge question which goes back centuries, but in a way, that’s the point. The modern Spanish state, which only emerged in 1978 after Franco's long dictatorship, has continued to struggle with one of the major sources of conflict in the country’s history: the tension between those who have often sought to impose a more homogeneous and centralised Spain, and the aspirations of the culturally-distinct nations on its periphery, in particular the Catalans and the Basques.

Greater decentralisation became possible after 1978, but in the Basque Country this was partially overshadowed by decades of armed conflict with ETA terrorists; in Catalonia on the other hand, there was no violence, but from the 2000s on, the desires of a majority of Catalans for greater autonomy within the Spanish Constitution –in areas such as economic control, linguistic and cultural autonomy, education, and Catalonia’s own status as a nation - were blocked or even rolled back by the Spanish institutions.

Within this context, and at a time when Spain faced economic crisis and deep-set corruption issues, a grassroots movement favouring Catalan independence from Spain quickly gained popular support, leading to the 2012 election of a Catalan regional government which promised a referendum on independence. The Spanish government's immediate response, which has not changed over 7 years, was an outright refusal to even discuss the possibility of a referendum. The central point in this Spanish refusal is that “the unity of Spain” is one of the basic principles of the country’s Constitution; this is a document so difficult to modify that no major amendments have been seriously attempted in the 40 years of its existence. 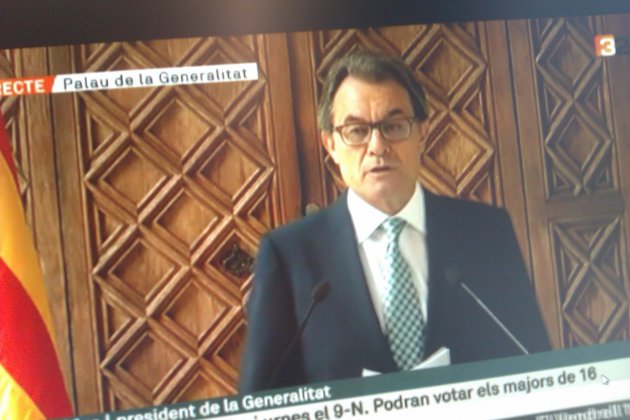 4. How did Catalonia come to hold the 2017 referendum, in defiance of the Spanish government?

Catalonia had already held an unofficial and non-binding independence referendum on November 9th, 2014, which Spanish authorities ruled as illegal but did not physically stop. The vast majority in 2014 voted “yes” to independence, but “no” voters largely stayed home. To achieve an official vote, the Catalan authorities called a snap election for September 27th, 2015, saying they wanted it to be a plebiscite on independence. Pro-independence political forces campaigned on this basis, but the other political parties, the Spanish government, and most Spanish media insisted that it was just another election. In the end, a slim parliamentary majority was won by pro-independence forces, and in terms of votes cast, they won 48%, compared with 39% for parties opposed to independence. The remaining 12% went to parties who took no stand on independence, with candidates that included both proponents and opponents of a Catalan state.

The Catalan government that eventually emerged from the election, under Carles Puigdemont, thus had inconclusive support for a unilateral declaration of independence but it did have a parliamentary majority to work towards independence, and on this basis it returned to its efforts to do so via a binding referendum. Mariano Rajoy’s Spanish government continued to flatly reject any dialogue on the issue. To break the impasse, Puigdemont’s administration said it would hold a binding referendum even without state approval, and would declare independence if the majority of voters favoured it. The Catalan government meanwhile also began work on so-called “structures of state” such as a Catalan tax system to prepare for possible independence.

5. How did the Spanish government respond to the referendum plan?

While it refused to act politically, the Spanish government worked hard on combating all independence-related initiatives: its main official line was a policy of “judicialization”. That is, since Catalan independence was not constitutionally permitted, Rajoy’s government said it would simply apply the law, taking to court all Catalan moves connected to independence. This led to a cat-and-mouse pursuit in which the Catalan “mouse” would move politically and the Spanish “cat” would respond with judicial decisions, striking down laws and prosecuting those who breached its rulings – such as the leaders who organised the 2014 Catalan consultation.

This process reached a climax in September 2017 as the referendum date approached, with the Catalan Parliament noisily passing (and Spanish courts swiftly suspending) two laws to authorise the October 1st vote and clarify the legal regime if independence was declared.

But then, since the Spanish government had declared that it would stop the referendum from actually going ahead, it had to go beyond its previous judicial response, which had essentially been a policy of reacting after the event. Judicialization now meant the arrival in Catalonia of thousands of Spanish police and Civil Guard officers, which occurred in September 2017, creating an authoritarian atmosphere of a type that older Catalans and Spaniards knew only too well. Police raids and heavy presence failed to stop the referendum in advance and, instead, galvanized a popular determination for it to go ahead – a spirit that reached beyond supporters of independence. 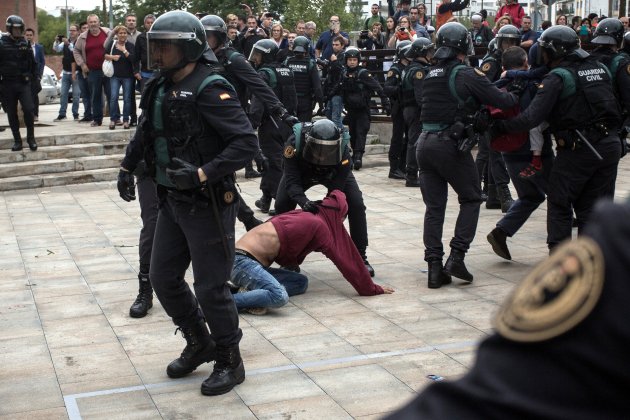 6. Everyone saw the police violence during the referendum. How does that relate to this court case?

There is a bitter irony in this. The key accusation of this trial, rebellion, is defined in the law as an uprising that involves violence on an insurrectional scale, and yet the only significant violence that took place in six years of massive, peaceful campaigning by the independence movement was that massively inflicted by the Spanish police forces during the referendum, when over 1,000 members of the public required medical attention as a result of police violence at 92 polling stations in all parts of Catalonia. Many legal experts and international ONGs have spoken out about this contradiction.

The question (which only the trial will answer) is how prosecutors and judges will deal with this. Some lines of argument, highly debatable, have been presented: that potential violence, not actual violence, is sufficient to define a rebellion (for example, a mass protest, even if peaceful); that the police violence itself was a necessary response, and therefore actually counts as violence by the “rebels”; and that the only signs of violence in the process –three police vehicles whose bodywork was vandalised, and those police officers who were hurt while batoning the public on October 1st – constitute the whole actual rebellion. Or, perhaps the rebellion accusations will be converted into sedition charges, which only require a “disorderly public uprising” to be proven - also highly questionable, but a fallback position that could look like a compromise.

In contrast to this current case, there is no Spanish public inquiry into the police actions on October 1st, but only specific court actions against the actions of a small number of officers.

7. So why, after all that, did Catalonia not go through with independence? Or did it?

The referendum produced a result despite the police disruption: 90% of voters said “yes” to independence, on a 43% turnout of the votes that could be counted, which were most of them. Carles Puigdemont’s Catalan government reacted by saying it was hoping for international mediation and delayed a declaration of independence. Although international public opinion was shocked by the images from the referendum, the official reaction from the EU and other countries was that it remained an internal matter for Spain, and they did nothing.

What happened? That's another question which might be indirectly addressed in the trial, although with the absence of a key figure like Carles Puigdemont, it's difficult. It seems the Spanish state’s clear willingness to turn to force, along with the international silence, had its effect. There was a failure, perhaps, in the Catalan assumption that the demonstration of a popular will in the referendum, combined with a powerful international spotlight on the basic democratic principles of the issue, could persuade Spain to address the question politically. While this may be seen as naïve, it seems far from the “violent rebellion” of the charges in the Supreme Court trial. 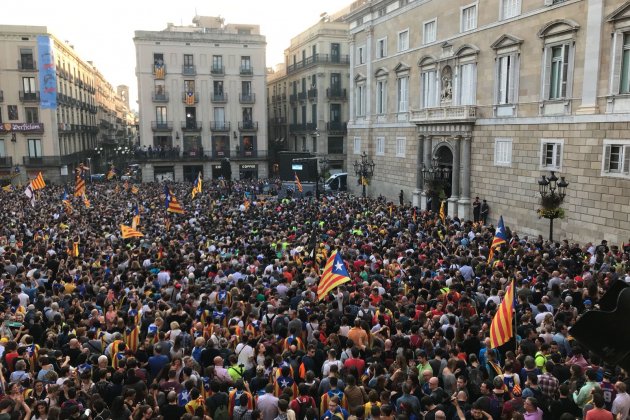 8. Why isn’t Carles Puigdemont part of this case?  And why these 12 defendants?

After October 27th, 2017, when Spanish authorities took direct control of Catalonia via Article 155, the members of the Catalan government divided between those who chose to stay and resist in a likely atmosphere of repression, and those who would leave and fight from abroad. In the end, Catalan president Carles Puigdemont, four of his government ministers, and two other pro-independence politicians went into European exile.

However, when Spanish courts began ordering pretrial detention for the pro-independence politicians at home (with civil society leaders Jordi Sànchez and Jordi Cuixart already imprisoned), those abroad put themselves at the disposal of justice but encountered a very different response: unlike Spain, the courts in Belgium, the UK, Germany and Switzerland allowed the Catalan leaders to remain at liberty. When European courts began ruling on Spain’s extradition requests, Germany refused to extradite Carles Puigdemont on a rebellion charge, being unconvinced of any evidence for such a crime. The Spanish Supreme Court at this point dropped its arrest and extradition demands for all of these exiled politicians, who are now completely free in Europe but wanted in Spain. The blatant contrast in Spain's approach is one of the reasons why people refer to those held in Spanish jails as political prisoners.

The twelve now on trial constitute only one group of four that the case has been split into. Of the 29 people wanted or indicted, the seven who are in exile are not being processed at present. Then there is a group of four top Catalan police administrators, to be heard in a separate trial, and a group of six Catalan parliamentarians charged with disobedience, also separated. Those included in this trial are activists Sànchez and Cuixart, parliamentary speaker Carme Forcadell, and nine of the ministers in Carles Puigdemont's government, without the president himself being part of the trial. A request by defence lawyers for Puigdemont to testify as a witness in the case, by video conference, has been ruled out by the court.