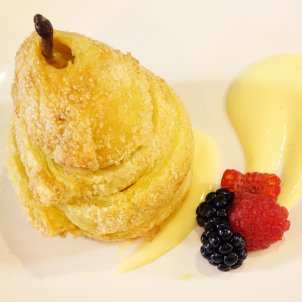 From the artful hands of chef Romain Fornell of the restaurant Caelis, we have this week received a dessert videorecipe that is both surprisingly easy and of spectacular quality: Baked puff-pastry pears.

What’s special about this dessert? It’s very simple: the trick is to be very careful with the pear, respecting its shape when we cut it. To accompany it, we prepare a syrup from water, brandy and some sugar, and we will boil the pears for 10 minutes. Meanwhile, we combine the butter with the almonds and chopped chocolate and then use that as a filling for the pears. Finally we cut strips of pastry about half an inch wide and wrap the pears delicately in these. Bake it in the oven and it’s done!

1. Separate off a little of the sugar.
2. Fill a medium saucepan with 2 inches of water and bring it to the boil.
3. Add the rest of the sugar, the brandy and the cinnamon stick to the water, stirring to ensure the flavour comes out.
4. Carefully peel the pears so as to maintain their shape.
5. Cut off the top (neck) and a bottom slice of the peeled pears and keep them aside.
6. With an apple-corer, remove the core of the pears.
7. Carefully place the pears in the water and boil for 10 minutes.
8. Then remove them and let them cool.
9. Meanwhile, in a bowl, mix the chopped chocolate, almonds and butter.
10. Carefully introduce the mixture into the pear cavities, then cap them with the top and tail of the pear saved earlier.
11. Roll out the pastry and cut a circular piece the size of the pears, one for each pear. Then cut out a small quadrant from this pastry circle, so that it will wrap around the neck of the pear like a cone. Use the beaten egg to “glue” the cone to itself.
12. Cut half-inch-wide strips of pastry and wrap them around the circumference of the pear until the whole pear is wrapped.
13. Paint the whole pear with the rest of the beaten egg and sprinkle the remaining sugar on top.
14. Bake in the oven at 375º F (190º C) for 15 minutes 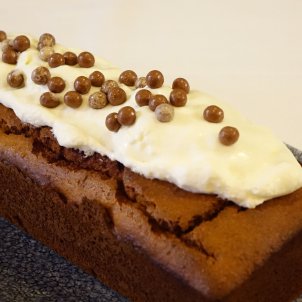 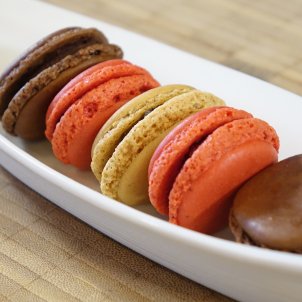 Desserts Macarons: much easier than you think Roberto Lázaro