The top six Catalan dishes you've got to try

We all know the feeling of wanting to try a new cuisine, heading into a restaurant and feeling overwhelmed by the range of unfamiliar dishes on the menu. How should we know what's good, what's traditional, what's worth tasting? Here at El Nacional, we want to give you a few pointers to get you started should you ever find yourself in this position in Catalonia.

Catalan food is all about comparatively simple recipes focused on letting quality, seasonal ingredients speak for themselves. And Catalonia, stretching as it does from the sea to the mountains via forests and plains, boasts a wide variety of ingredients: there's seafood and fish, meat and poultry, even snails; there's all manner of cheeses, cured meats and sausages; and there's the produce that marks the passing of the seasons, from the calçots (see below) of spring to the wild mushrooms of autumn.

At El Nacional, we've picked six dishes you should try if you get the chance. If you can't wait until you get to Catalonia, we've linked to recipes in English so you can try making them for yourselves. 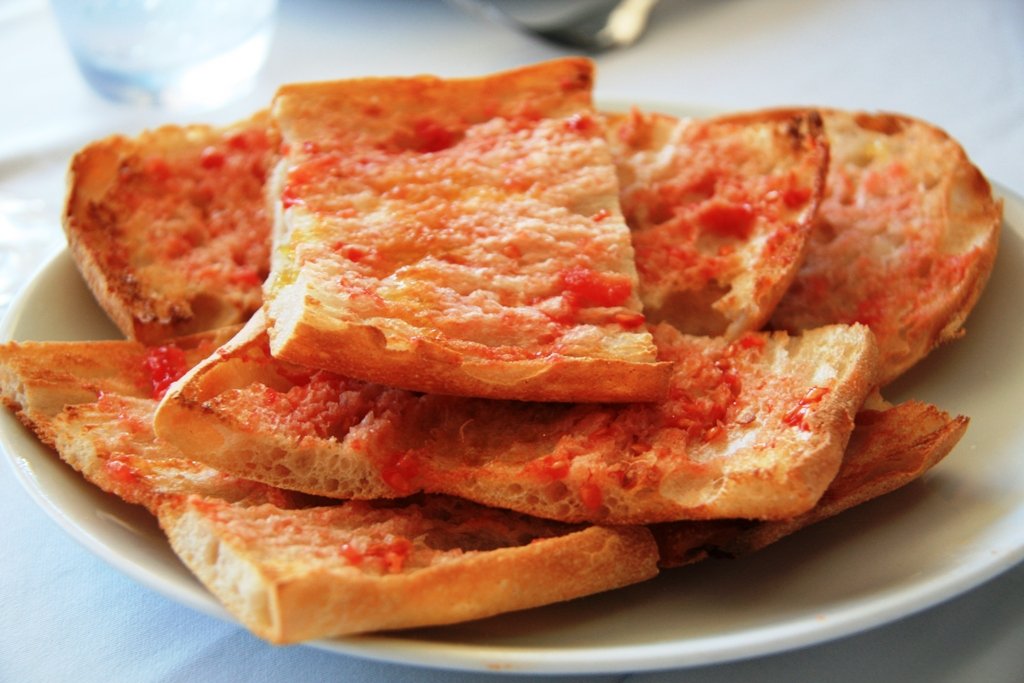 Photo: Javier Lastras / Wikipedia (Under the CC BY 2.0 license)

We're starting so simple it's barely a dish, but it's one of the most important symbols of Catalonia nonetheless. Pa amb tomàquet literally means "bread with tomato". In Catalonia, instead of turning to margarine or mayonnaise to moisten a sandwich, you take half a tomato and rub it over the bread (rubbing garlic on first is optional). That's followed by a drizzle of olive oil and a sprinkling of salt.

Pa amb tomàquet is also commonly eaten by itself, either as a simple appetiser or side, or as part of a spread of tapas. In Spanish, it's known as pan con tomate or even pan tumaca, based on the pronunciation of the Catalan name. 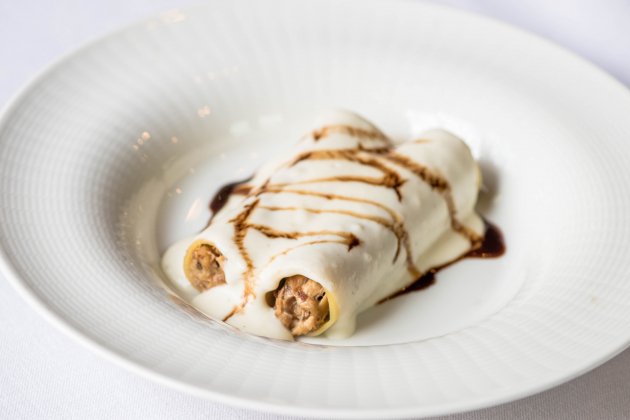 Whilst internationally we may associate cannelloni with Italy, this version is typically Catalan. Gone is the bolognese you might be used to, instead the Catalan recipe uses bechamel and larger pieces of cooked meat. Canelons are often eaten on St Stephen's Day (Boxing Day) and can be a great way to use up leftovers. Done well they should be mostly creamy and soft, with some more crisped-up bits of pasta around the edges of the dish.

Our recipe for canelons is here. 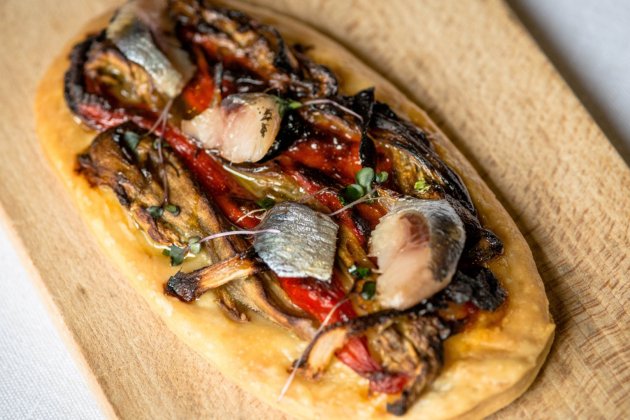 Coca de recapte is another Catalan dish that might remind you of something Italian: it's in the same family of recipes as pizza, except without the tomato sauce or cheese. It's traditionally topped with escalivada (making this a two-in-one of classics) and a fish, like sardine or anchovy, although there are ever more variations available. Escalivada, by the way, is roasted red pepper, aubergine and onion, often served cold. A good choice for picnics or potlucks, they're often served cold with the focus on the natural flavours of the toppings.

Our recipe for coca de recapte and escalivada is here. 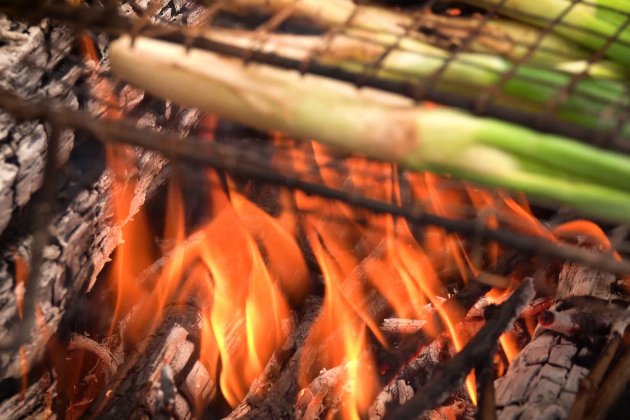 Calçots are a member of the allium family similar to the scallion, in season during the first few months of the year. They're roasted over a fire, then the blackened skin is peeled off, they're dipped in a sauce and eaten. That sauce, depending on who you speak to, is either the same as, or very similar to romesco, a thick sauce with tomato, pepper and nuts that's becoming perhaps one of Catalonia's best-known culinary exports. Eating calçots is a social, potentially messy experience. The calçots themselves can be surprisingly sweet and you have the contrast of the hot onion with the cool sauce.

Our recipe for romesco sauce is here. 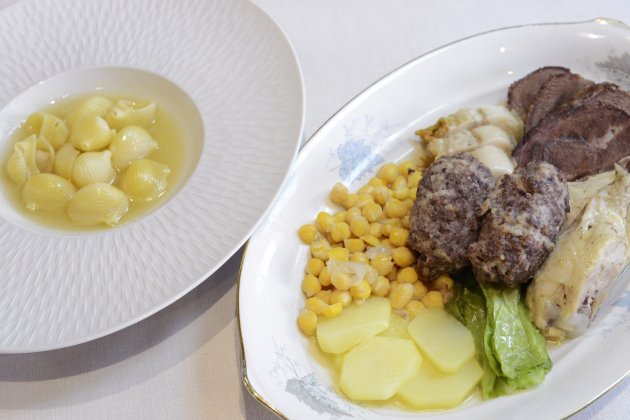 Escudella is a traditional stew with meatballs; carn d'olla (literally "saucepan meat") is the meat used to flavour the broth, served as a separate course alongside the vegetables used. Sopa de galets is a version typically eaten on Christmas day which includes large pasta shells called galets. It's a comforting winter dish, with a rich, umami flavour. 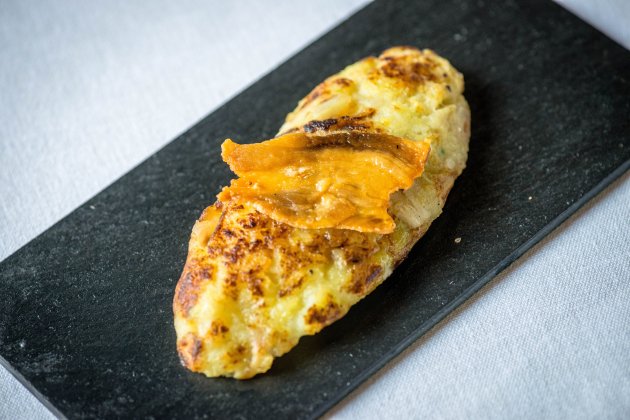 Coming from the north, more mountainous areas of Catalonia, trinxat is something akin to bubble and squeak, with a hint of bacon (or properly cansalada). Another very easy recipe, needing very few ingredients, it can be prepared specially or made to use up leftovers. Filling either as a side or served by itself, the meat and frying make it feel naughtier than boiled potato and cabbage would normally.

Our recipe for trinxat is here.