Jailed Catalan minister Jordi Turull has told El Nacional, on the ninth day of his hunger strike, that for the first time he has had a difficult night. "The night was tough. Something that hasn't happened to me for a long time. It's the first day that I've been hit by a kind of anxiety about eating, mixed with insomnia," he said.

Turull said that he couldn't sleep, but that it wasn't because of "all that happened outside on Saturday, which I don't want to comment on", he said, in reference to both the CDR protest action to cut the AP-7 motorway, and the defeat of this football team, Espanyol. "Fortunately, those things have never kept me awake. It was the anxiety of thinking about eating. Late, very late, I managed to get to sleep and I got up better than I did yesterday. It's strange," he added. 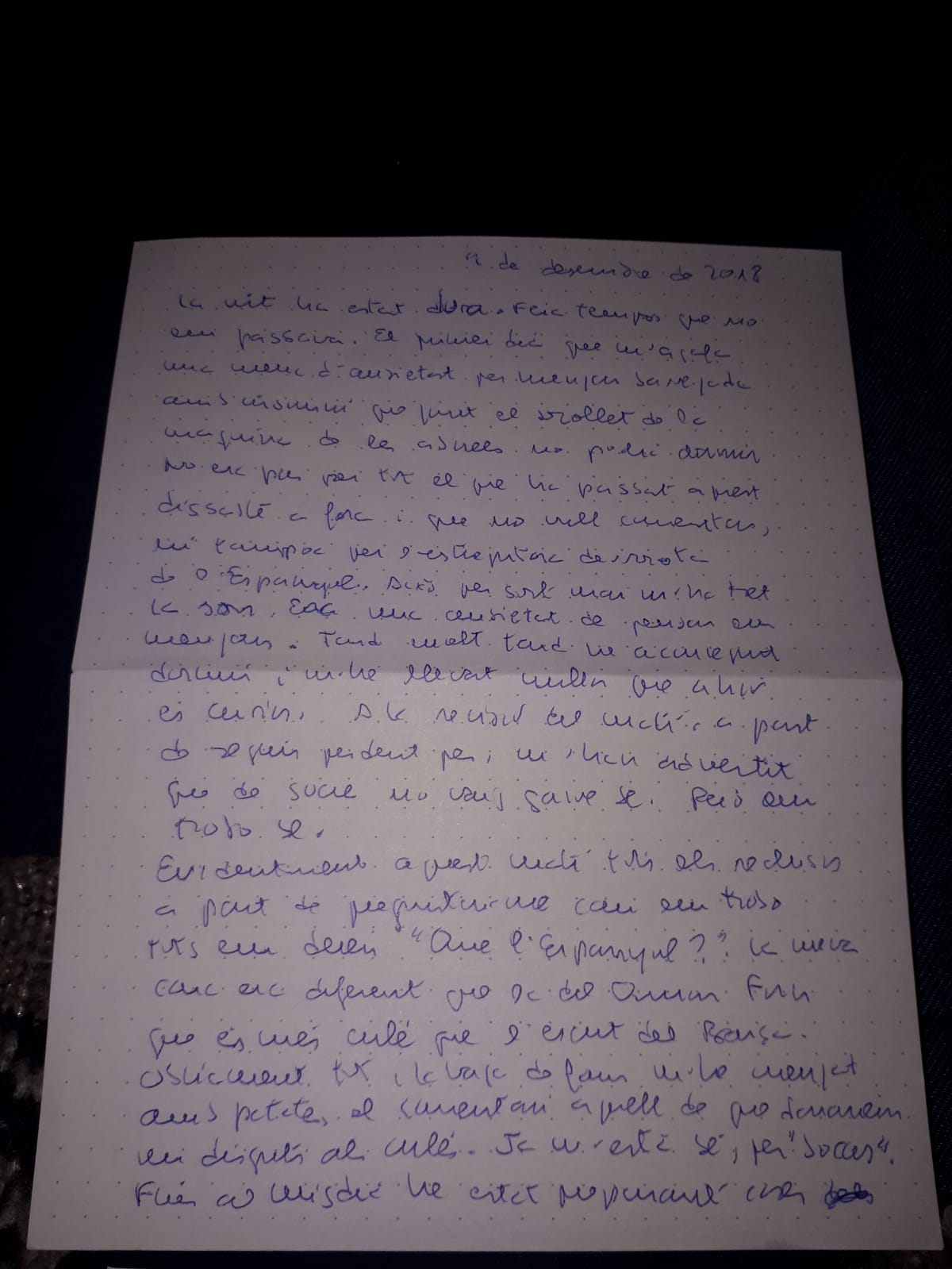 The minister explained that also different today was the result of his medical check. The four hunger strikers - Turull and Jordi Sànchez who are on the ninth day of their hunger strike, and Josep Rull and Quim Forn, on their sixth day - all receive medical monitoring, but this morning Turull's medical check detected deficits. "Apart from continuing to lose weight, they have warned me that my blood sugar is not very good. But I feel well," he said. Turull also commented that this morning, his fellow inmates, as well as asking him how he was, posed the question: "And what about Espanyol?" a reference to the 0-4 beating his team took in Saturday's derby with Barça. "Despite the hunger strike, I have had to "suck up" a few comments that some Barça fans wouldn't really approve of. That'll teach me to open my mouth," he added.

Turull chronicled that he had spent the morning reviewing juidicial papers. "The more I immerse myself in the issue the more I see the insolvency of the accusations made by the public prosecutors and solicitor general," he said. In the afternoon the minister had a special family visit with his wife and his two daughters, "my three ladies." "The only difference I noticed to all my other family visits, and to those of all the other inmates, is that normally they bring you food and drink, but this time there has only been water," he said. 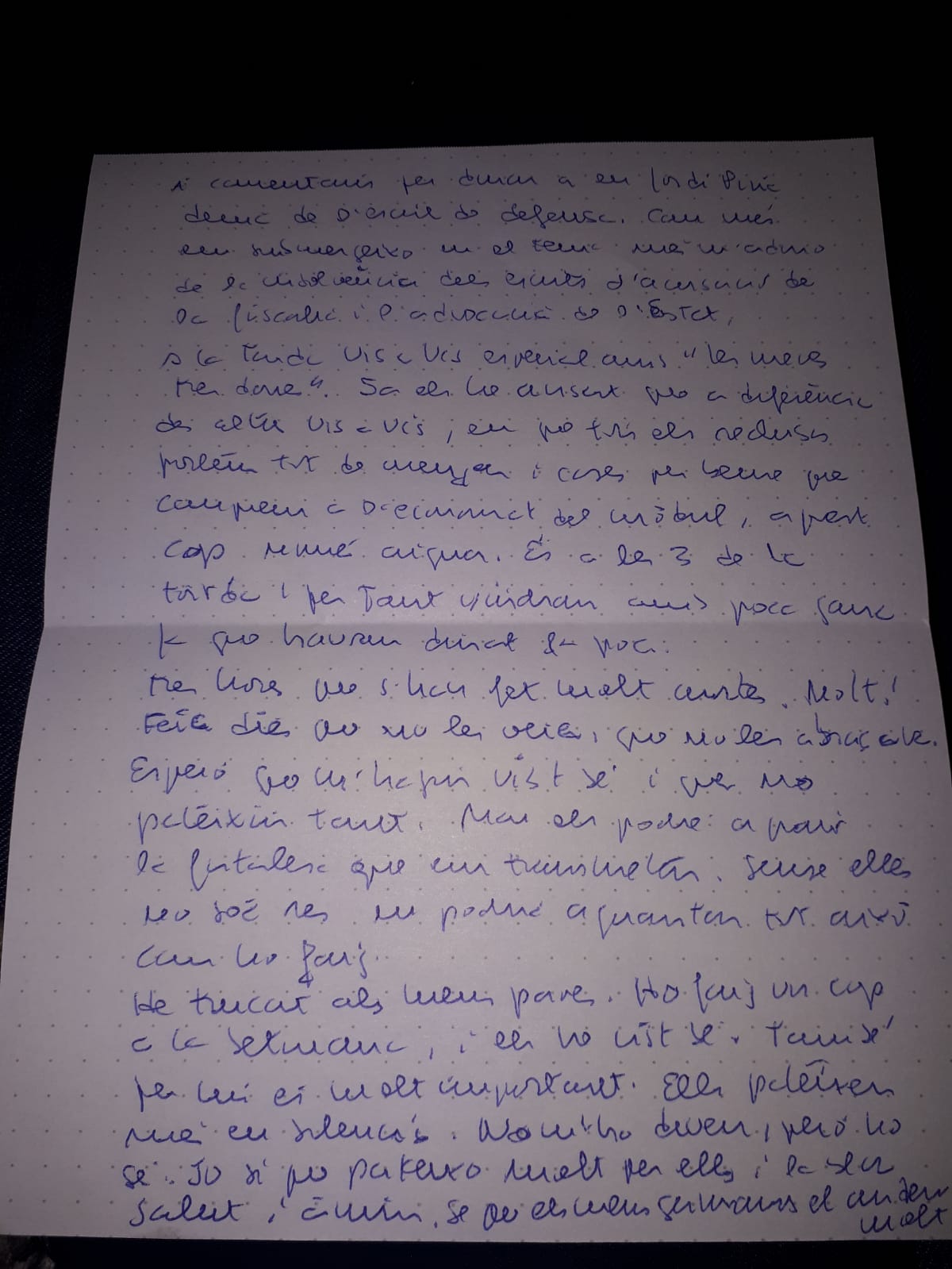 The family visit lasted for 3 hours, thanks to a special permission achieved by doing extra work and good behaviour, but he admitted that it had seemed "very short, very." "I hadn't seen them or given them a hug for days. I hope they got the impression I was well and that they're not suffering too much. I'll never be able to be grateful enough for the strength they transmit to me. Without them I am nothing, I couldn't cope with what I'm doing," he said.

Turull also spoke today by phone with his parents.

To denounce their situation

The Catalan pro-independence political prisoners on hunger strike are taking the action to denounce their situation and, in particular, the blockage of their appeals by Spain's Constitutional Court. A total of nine Catalan political prisoners continue to be held in "pre-trial" prison, for periods of between nine and thirteen months so far, accused of rebellion and other charges related to the 2017 Catalan independence referendum.