Conversation with Jordi Sànchez, on day 1 of his hunger strike: "This is serious"

Seated behind the glass of the visiting room at Lledoners prison, Jordi Sànchez looks calm, firm and convinced, ready to take a stand against a Spanish state that has shut him and his colleagues in prison and a Constitutional Court which is trying to prevent their case from reaching the European Court of Human Rights. With long experience as an activist in political and social struggles behind him, the former president of the Catalan National Assembly (ANC) and Catalan parliamentary deputy for the Together for Catalonia (JxCat) group has just started a new battle which he will fight in his prison cell: a hunger strike. Today, Saturday, is the first day.

The day has dawned grey and misty at Lledoners. It's cold and, to reach the prison, you have to enter a disturbing bank of fog, blocking out the sun which at that same hour of the morning, is flooding down on Barcelona. Most of the booths where prison inmates receive visits are empty, but some are in use, with prisoners talking to relatives and friends. There are children too. A few. But there is no noise. A mother rocks a baby in her arms. Within these walls, you get glimpses of many different worlds. In the cells of the pro-independence prisoners, too.

The hunger strike is the big news of the day. The night before, a photo of the seven prisoners in the prison courtyard was made public. All seven appear together, smiling. It is the first image of them all together in the prison. In the courtyard. The aim of the photo is precisely to convey unity. The political prisoners prepare themselves for a new strategic move. They have made it clear that they are doing this together. 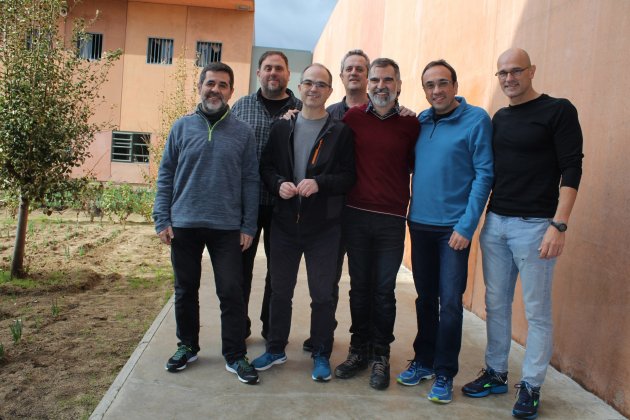 At the same time as El Nacional is talking to Jordi Sànchez, his lawyer Jordi Pina and the president of the Medical Association, Jaume Padrós, are in a press conference, explaining the reason for embarking on a hunger strike.

The former president of the ANC speaks with conviction. Everything has been thought about. Nothing has been improvised. He and Jordi Turull communicated their decision to the prison director and medical director late on Friday afternoon. The prisons have a protocol for these cases. They are monitored. The case has to be communicated to the court of penitentiary surveillance.

How is he facing this situation? “With complete calm. We know that it isn't a game. It's serious. It's not a fireworks show,”  assures Sànchez. Calm is provided by the interdisciplinary medical team that monitors them and that from now will become the key reference point for every step they take.

The hunger strike is indefinite. It doesn't have a finish date. Starting today, they only drink water. Probably some other prisoner will join them on the hunger strike in the days ahead. What is explicitly indicated is that Carme Forcadell and Dolors Bassa will not join them, as they are alone, in the jails of Mas Enric and Puig de les Basses respectively, and that is a clear red flag against a measure as drastic as this. Next week more initiatives will be announced.

They are all aware that this decision can only be personal. It is not an option that can be adopted collectively. “This isn't a sect. There is absolute respect for the decisions that each person takes. That is very important”, he says.

The objective, however, is shared: to denounce the attitude taken by Spain's Constitutional Court which systematically blocks their appeals. Sànchez explains that to achieve this "from prison, the only course that is open is a hunger strike". "And the moment to do it is now", he emphasises, since when the trial verdicts come out the perception will be very different. Moreover, this new offensive takes place in the middle of the celebrations of the 40th anniversary of the Spanish constitution.

“The aim is to stir consciences and attract attention. Put the spotlight on an unjust situation”, he explains.

Jordi Sànchez has very clear ideas, he knows what he wants to do and how to do it. He speaks quickly. Time is very limited. After thirteen months in prison he is used to managing these moments. The explanations flow while he observes his interlocutors with attentive eyes, scrutinizing their reactions, listening to their responses.

The former ANC leader is thinner, dressed in a grey polar jacket and a high-neck jumper, also grey. He has to speak through a telephone. On the other side of the glass, as well as El Nacional, are two other journalists along with criminal law professor Joan Queralt, and we all listen via a small loudspeaker in the narrow cubicle, really intended for no more than two people.

In the booth behind him, with his back to Sànchez but visible through the glass, is Jordi Turull with members of his family. At the end of the row, Jordi Cuixart. Further away, Raül Romeva. All are thinner. Calm. Happy to greet familiar faces. Through the glass. They raise their hands, offering a palm. From the other side, another hand receives the greeting with an impossible crash. Attempting to explain many things with their eyes, with their expression, with a smile... With a strangely intense greeting. As if there were no physical barrier. But the barrier is there. And it suffocates the voices and the words.

The former leader of the Assembly denies completely that it was the ANC that proposed this strike. "That's a lie", he says flatly, visibly displeased. The president of the organization, Elisenda Paluzie, has also denied this publicly. They know that this kind of news intoxication forms part of the strategy to break the unity of the independence movement. To discredit it. The battle of the prisoners is open on many fronts. And it has too many trenches.

The political prisoners meet in prison, usually on Saturdays, to prepare the trial. It was in this context that the idea came up to initiate this new strategy. Then there was a collective reflection and, above all, the desire to very clearly present an image of unity.

The political parties were informed at the last moment. Exiled president Carles Puigdemont and president Quim Torra have known for just a few days.

Are you afraid? “It is not a matter of fear. I have never embarked on a hunger strike and you don't know what you might find there”.

He knows that the most critical days will be on Sunday and on Monday. That once these first three have gone by the sensation of hunger is appeased because the body gets used to not ingesting solid foods. He knows that the prison regulations will force them to keep going to the dining hall at lunchtime.

However, he insists they are prepared, that they have a monitoring team, with the doctors at the centre, as well as doctors Jaume Padrós and Jordi Vilarasau. “Nothing has been improvised. This isn't a game,” assures Sànchez. Nor do they intend this to unleash a wave of hunger strikes, even though they know that the solidarity fasts that were held a year ago are to be repeated.

The decision is compelling. And it is enormously risky. However, Sànchez stresses that it is not a leap into the void, that they do not intend to emulate Bobby Sands, the IRA activist who died in 1981, aged 27 years, after 66 days of hunger strike. “We don't intend to put our lives at risk. We have not abandoned all common sense”, he assures.

The key aspect will be to balance forces. He admits that they do not contemplate a strike of 60 days, but he makes it clear that apart from that, the only thing that would make them give up the strike would be for the Constitutional Court to take their appeals out of the folder and either resolve them or reject them, to unblock the path and allow their appeals to move to European level.

The reason for the strike is this: to denounce a blocking strategy by Spain's Constitutional Court, which has stalled all their appeals, thus obstructing access to the European Court of the Human Rights, where they cannot present a case until the highest Spanish court has spoken on the issue. The objective of the Spanish state, claim the prisoners, is to delay these procedures, to ensure that by the time international court decisions arrive in support of the independence movement, the prisoners will already be on the street, as has just happened in the case of Basque politician Arnaldo Otegi. “The impact that they want to avoid is to find themselves forced to open prison doors”, concludes Sànchez.

They are aware that everything is also being thought through at the Constitutional Court, that there is a judge behind it, Cándido Conde Pumpido, who is coordinating all the rulings on the process at the court, which are formally admitted but not resolved. They just get blocked. This is not new. There are appeals from Basque political party Bildu which the court has managed to keep hidden for seven years in some "drawer".

It is against this strategy of delay that they are acting. They want to denounce that the same system of control by political parties which has tarnished Spain's General Council of the Judiciary to the point where it has broken down, is also at work in the Constitutional Court. “We want people to talk about this, we want people to be aware of what the Constitutional Court is doing, just as we have seen what is happening in the Council of the Judiciary”, he remarks.

A voice over the loudspeaker warns that only five minutes of visiting time are left. And the final words are forced out roughly while the short time remaining is used up.

Jordi Sànchez confesses that he is preparing himself to spend his second Christmas in prison and without trial. Far away from his family. In fact, it is his family that is more worried about him at present, in the face of this new decision. Christmas with a hunger strike.

The time has run out and we have to leave. In the visiting booths, nine impossible farewells are performed.

Leaving the prison, the fog has gone and the clouds have vanished. We, the group of prison visitors who previously gathered at the penitentiary entrance, now make our way out again through the same corridors, crossing a courtyard. Without a sound. The baby has fallen asleep in its mother's arms. The sun is out. But the cold continues.