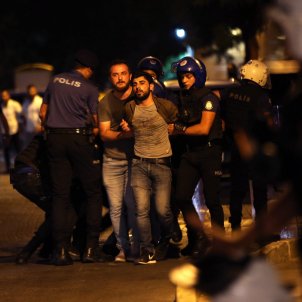 Turkey is acting towards pro-independence Kurdish politicians in the same way as Spain does towards Catalan and Basque pro-independence politicians. That is the explanation that Turkish interior minister Suleyman Soylu has given to the international press to justify the removal of three mayors representing the left-wing Democratic People's Party (HDP), deeply rooted in Turkish Kurdistan. "Although there was no violent act, twelve Catalan officials have been prosecuted for the crimes of destroying the constitutional order through violence and disobedience," he said, showing a sound knowledge of Spain's Supreme Court trial of Catalan independence leaders.

Journalists were questioning Soylu on the European repercussions of these new repressive actions, which continue to provoke protests and episodes of disorder such as that shown in the photo. The minister argued that the European Union can scarcely criticize Turkey while it remains silent on the persecution of elected officials in an EU member state, in reference to Spain.

The three suspended mayors have been replaced by officials appointed directly by the central government in Ankara. The interior ministry accuses the elected municipal leaders of collusion with the separatist, communist Kurdistan Workers' Party (PKK), which Turkish authorities consider a terrorist organization.

The sacked mayors are Adnan Selcuk Mizrakli, co-mayor of Diyarbakir, the capital of Turkish Kurdistan; Ahmet Turk, mayor of Mardin, and Bedia Ozgokce, co-mayor of Van. In the elections of March 31st, all three politicians defeated 'trustees' previously appointed by the government.

Soylu belongs to the Justice and Development Party (AKP), the Islamist political group which president Recep Tayyip Erdogan heads. The dismissal of these mayors comes just a few months after the municipal elections in which the AKP was defeated in the country's large cities, including Istanbul and Ankara.

Even some major figures in the AKP, such as former prime ministers Ahmet Davutoğlu and Abdullah Gül - the latter also a former president - have criticized the Kurdish mayoral dismissals as an undemocratic measure.

The best-known member of the HDP is the deputy Selahattin Demirtaş, who has been imprisoned for two years without trial. Demirtaş was the subject of a ruling by the European Court of Human Rights which the Catalan political prisoners used to argue unsuccessfully for their release from pre-trial prison.

The ruling concluded that preventing Demirtaş from taking part in parliamentary activities as a result of preventative detention would constitute an unjustifiable interference in the freedom of expression and opinion, and in his right to be elected and to occupy his seat. It also stated that the prolongation of imprisonment pursues the goal of "stifling pluralism and limiting the freedom of political debate."

The court considered that this imprisonment not only acts against the rights and freedoms of the deputy but also "jeopardizes the democratic system", and it called on the Turkish state to adopt the necessary measures to "end the precautionary detention of the plaintiff." Demirtaş is still in prison.