Telepolis: "No matter who governs in Spain, the response is always repression"

German digital newspaper Telepolis has published an article that is highly critical of the Spanish state for the policies of judicialization and repression which it has used in its response to the Catalan conflict. The article, entitled "Spain: 'No matter who governs, the response is always repression' " (link in German), deplores the poor political management of both Socialist prime minister Pedro Sanchez and his predecessors and reports on the anomalous election campaign - for next Sunday's European and municipal votes - that the country is experiencing.

"The Socialist government likes to talk about dialogue, but at the same time it applies repression against the Catalans," the article states. The newspaper believes that the judicialization of the independence process - combating it in the courts rather than undertaking political negotiation - has been a bad strategy. It says the trials currently underway of pro-independence leaders are "absurd".

"Now they have charged 28 more Catalans with being part of a criminal organization, president Quim Torra is accused of disobedience for not removing yellow ribbons from public buildings... And in these cases, the judicial powers act very quickly," says the German newspaper. In addition, it considers that Spain's Central Electoral Commission, a political protagonist in recent weeks​, is not competent to rule on these types of cases and recalls that "the three parties holding the majority in the Catalan Parliament support the political prisoners." "No matter who governs, the response is always repression" the Catalan president is quoted as saying. 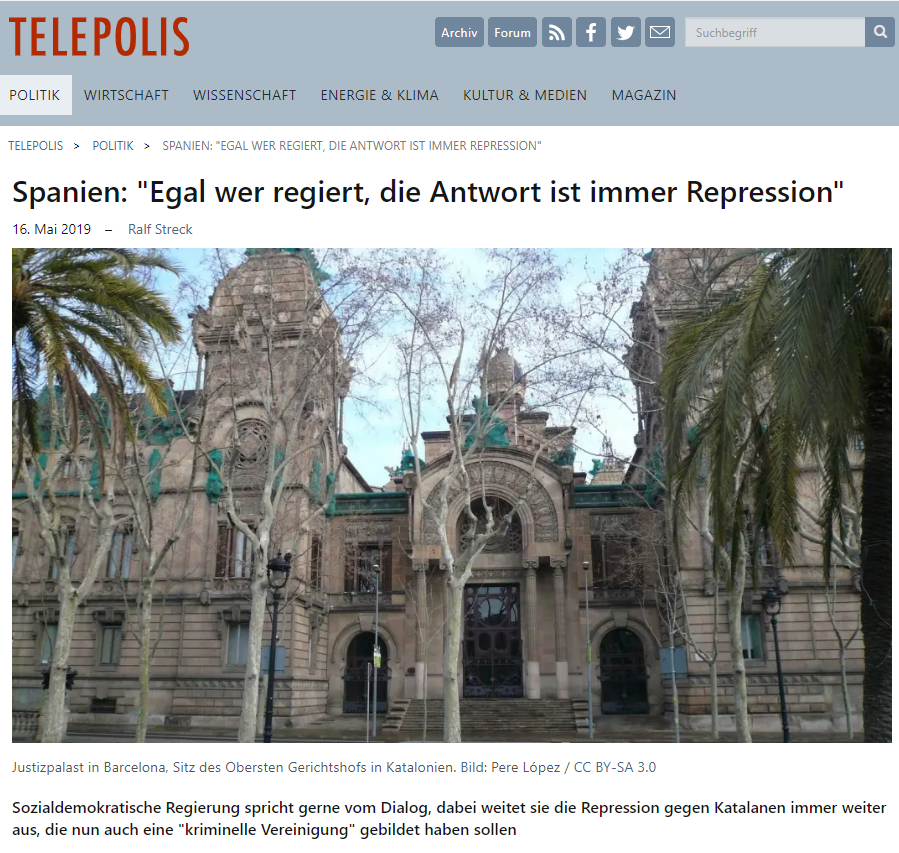 "The Electoral Commission has shown its bias"

The Telepolis article says that the actions of Spain's Electoral Commission were illegal and biased: "Without any legal basis, the commission tried to exclude Carles Puigdemont from the European elections. The public prosecution service was very clear that there were no grounds to prohibit him from running: neither Puigdemont, nor Clara Ponsatí, nor Toní Comín" - mentioning the three exiled Catalan government members who are running for European office.

Finally, the German newspaper celebrates the fact that the exiled president and his former cabinet ministers can, in the end, take part in the European elections next Sunday and recalls that a legal case has been presented by Carles Puigdemont against the Electoral Commission members representing right-wing Spanish parties Cs and PP who denied him the right to stand in the elections.