The new speaker of the Catalan Parliament, Laura Borràs, has promised to ensure that the institution "is respected" in the face of "outside interference" and to "culminate" the process of "national liberation". These were her words in her first address as the highest authority in the Catalan chamber, after being elected with the votes of the two largest pro-independence parties, ERC and JxCat, in the Parliament's constituent session held this Friday morning.

Borràs made particular reference to one of her predecessors in the role - Carme Forcadell - to whom she referred as a example to follow, saying that her goal was to "continue her work at the point she left it". The speaker recalled that Forcadell is now serving a prison sentence for allowing parliamentary debates, and called it an "anomaly." "We will not tire of denouncing this," she said, in the presence of Forcadell herself, who was able to attend the session because, unlike most of the Catalan political prisoners, she has not for the moment been stripped of her open 'Level 3' prison regime. 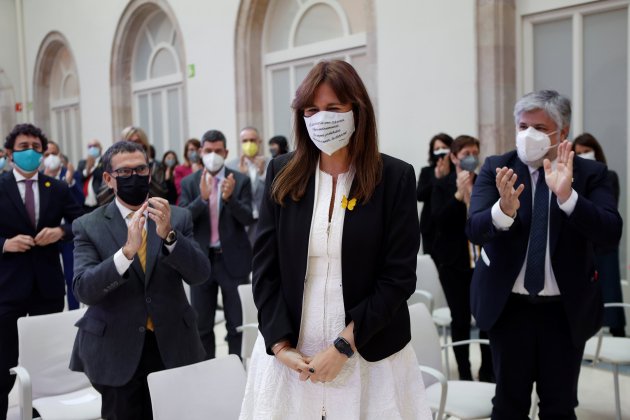 The new president of the chamber thus made it clear that in the institution she presides over "it must be possible to talk about everything" and warned that "without separation of powers there is no democracy", in reference to the interference of the Spanish courts in Catalonia's parliamentary activity. The latest occurrence of this, in fact, is a charge brought by public prosecutors against the outgoing speaker, Roger Torrent, and the other pro-independence members of the Bureau. "I will make this house respected in the face of all outside interference. I will protect the Parliament from the Spanish state's dirty war against Catalonia," Borràs clarified without hesitating.

In addition to her reference to Forcadell, Borràs mentioned the existence of political prisoners, exiles and others suffering reprisals and dedicated a special greeting to former minister Meritxell Serret, who returned to Spanish territory yesterday after being exiled in Brussels since the Spanish government's application of Article 155 in 2017. Serret voluntarily appeared before the Supreme Court in Madrid and was released. 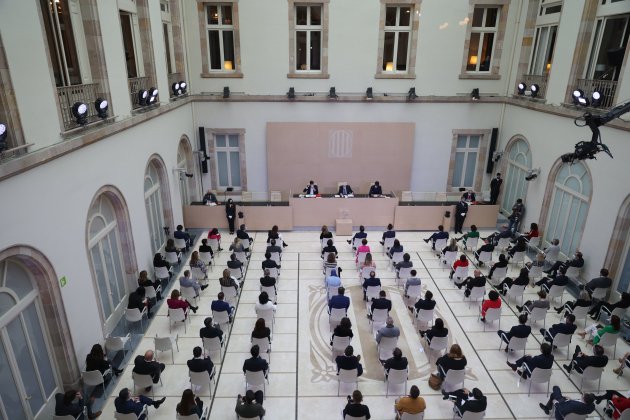 Today's session was held in the Parliament's larger and more austere auditorium in order to comply with Covid safety distances / Photo: Sergi Alcázar

Finally, Borràs vowed to "fulfill the mandate of the 14th February", in a clear warning to the Spanish authorities that she intends to make full use of the 74-seat absolute majority of the house won by the three pro-independence parties. During the last legislature, the mandate from the Decembet 2017 election was severely altered by judicial interference, meaning that three JxCat candidates were vetoed from holding the presidency of the government.

Past, present and future

In her speech, the speaker of the chamber also focused on the present predicament of society, asking MPs to observe a minute of silence in memory of the victims of Covid-19, and pointing out that the fact that the constituent session of Parliament was held in the auditorium and not in the debating chamber is another example of the exceptionality of the health situation.

Earlier, Borràs recalled where the Catalan parliamentary tradition came from, mentioning the chamber as it existed during the Republic nearly ninety years ago, which represented the sovereignty of the Catalan people from 1932 to 1939, and also the mediaeval Catalan Corts, abolished by "Bourbon authoritarianism". With an eye to the future, Borràs promised to work to make Parliament "a pioneer" and "as digitally user-friendly as possible". Similiarly, she celebrated that for the first time the speaker's position and the two deputy speaker roles are all now occupied by women. The first deputy speaker is Anna Caula (ERC) and the second Eva Granados (PSC).

During her speech, the six deputies from the opposition Ciudadanos group left the session to show their rejection of its content. Earlier, the party's leader, Carlos Carrizosa, sought prominence by twice interrupting the speech given by ERC's Ernest Maragall in his role as the oldest person in the Parliament, the person automatically designated to take charge of the constitution process of the Parliament until its officers are elected.

Below, Laura Borràs's speech after her election as speaker of Catalan Parliament.