Torrent, targeted: another Catalan speaker of the house charged for allowing a debate 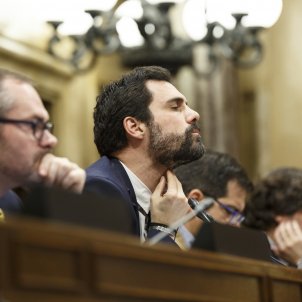 Spanish prosecutors have once again taken aim at the Catalan institutions and have laid a complaint against the speaker of the Catalan Parliament, Roger Torrent, along with several other Catalan MPs who are members of the house's procedural Bureau for its rejection of the sentences given in the trial of the pro-independence leaders.

The public prosecutors presented accusations against outgoing speaker Torrent as well as Josep Costa, Eusebi Campdepadrós and Adriana Delgado for admitting to debate the resolution proposed by the three pro-independence parties Junts, ERC and the CUP in response to the long prison sentences for sedition resulting from the 2019 trial. The text of the specific complaint denounces that they admitted the motion, disregarding the objections of other members of the Bureau, and allowed it to be debated in the plenary session of November 12th, 2019 even though the Constitutional Court had already issued its position contrary to this, on November 5th.

The complaint quotes the positioning of the Parliament on the matter, and includes the resolution: "[This house] reiterates, and will reiterate as many times as the deputies want, its defence of the right to self-determination and the vindication of the sovereignty of the people of Catalonia to decide their political future". The resolution also specified that: "Parliament expresses its will to exercise in a concrete way the right of self-determination and to respect the will of the Catalan people".

The prosecutors accuse Torrent, Costa, Campdepadrós and Delgado of a crime of disobedience, requesting that a statement be taken from the defendants and that those persons who may be added during the investigation as defendants be included.

Rejection of the Supreme Court ruling

The resolution rejecting the verdict of the trial that sentenced the nine pro-independence leaders to a total of over 100 years in prison was passed by 61 votes in favour, none against and 8 abstentions. The deputies of JxCat, ERC and the CUP supported it. The representatives of Ciudadanos, at that time the largest opposition party, left the chamber and those of the PSC and the PP, who remained, did not take part in the vote. The abstentions are from the seats of the non-aligned Comuns. A change of schedule in the parliamentary session allowed the Catalan house to bypass the Constitutional Court ruling by passing the text three minutes before the email arrived informing of the court's suspension of the resolution.

Disapproval of the monarchy

The Catalan Parliament’s enterprise committee passed a motion condemning the Spanish state’s economic "dirty war" against Catalonia after the 1st October 2017 referendum. The text, passed with the votes of JxCat, ERC and the Comuns, also disapproved of the participation of king Felipe VI and former Spanish economy minister Luis de Guindos, calling for his resignation from his position at the European Central Bank.

The resolution "condemns the campaign by the Spanish government to destabilize the Catalan economy" and "affirms the serious danger to the economic and financial stability of Catalonia" that this caused. It also urged the parties represented in the Congress of Deputies "to demand a clear, detailed and transparent explanation" from the Spanish government about this operation.

The previous speaker of the Catalan Parliament, Carme Forcadell, is currently serving a jail sentence of 11 years and 6 months for sedition, for her part in the 2017 independence referendum process. In particular, as speaker, she defied the Spanish Constitutional Court and allowed the Catalan house to debate independence-related issues and to admit and vote on bills preparing for the referendum and a hypothetical independence process. 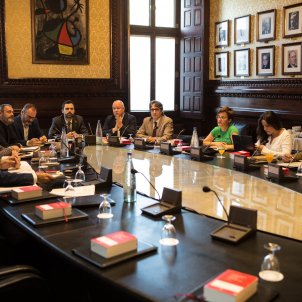 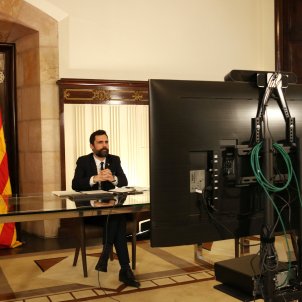 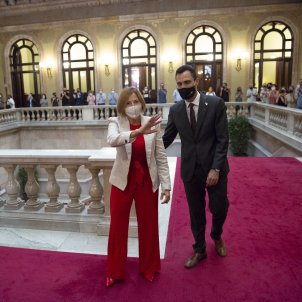