"A Spanish Trump", "a climate of war": foreign media focus on Ayuso and Madrid

The climate of tension that has built up during the campaign for this Tuesday's regional election in Madrid has made the news far beyond Spain. The international press regards the Autonomous Community of Madrid as a laboratory for the political experiments of the European far-right, and for new personality-based politics mutating around the world. Interest has spread as far as Qatar's Al Jazeera, which last month highlighted that the rise of Vox in Spain could act as a reinforcement for xenophobia and the far right in the rest of Europe, and has now focused on the profile of the Popular Party (PP) candidate, Isabel Díaz Ayuso.

Al Jazeera sees the current Madrid president as a re-invention of the right born within a traditional Spanish party, the PP. It is one of Spain's two alternating establishment parties along with the Socialists (PSOE), but under Ayuso, it has managed to capture the votes of other parties - and the Qatari network compares her with the 45th president of the United States: "The governor of Madrid, like Trump, who is about to win the election ... described by some as a populist, she has a tough-talking public speaking style that seems to thrive on controversy.."

The network also warns of the impact that her likely victory will have: "Ayuso is on course for a notable triumph in Tuesday’s elections that will likely have political reverberations far beyond Spain’s richest region." 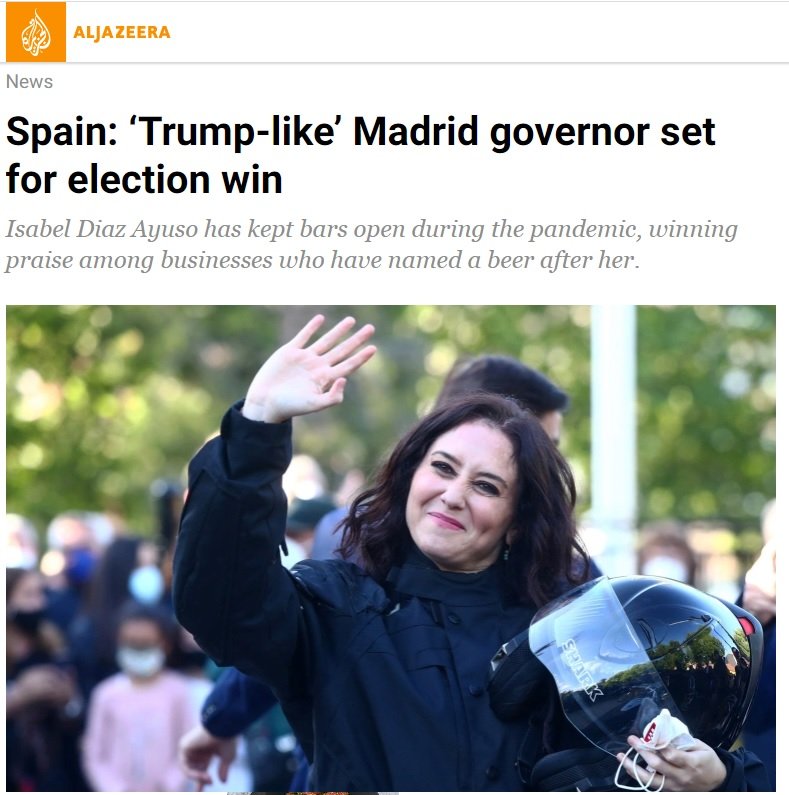 The European edition of the US news organization Politico has published an extensive report on the current situation in Madrid. A reference to the Spanish capital's political climate during the campaign as "bellicose" already appeared in the Portuguese press but the American publication goes further and even compares it with the Spanish Civil War, illustrating the point with an image of tension on the streets in the 1930s: "Shades of the Civil War darken Madrid elections. A polarized campaign marked by violence and death threats."

The publication argues: "That Civil War-style language has some recalling Mark Twain’s quip that while history never repeats itself, 'it does often rhyme'. Aggressive rhetoric from the start of the campaign spilled over into violence at two far-right rallies targeted by anti-fascist activists."

And digging into the historical archives, it specifies why the parallel with Spain's war years is valid: "As the battle of Madrid in 1936 set off a long siege that was only resolved when the city fell to Franco three years later, many in Spain see the capital’s regional elections as a preview for several years of political drama leading up to 2023, when regional and national elections are due." And taking Twain's phrase, Publico concludes: "In Spain, indeed, history rhymes with special intensity." 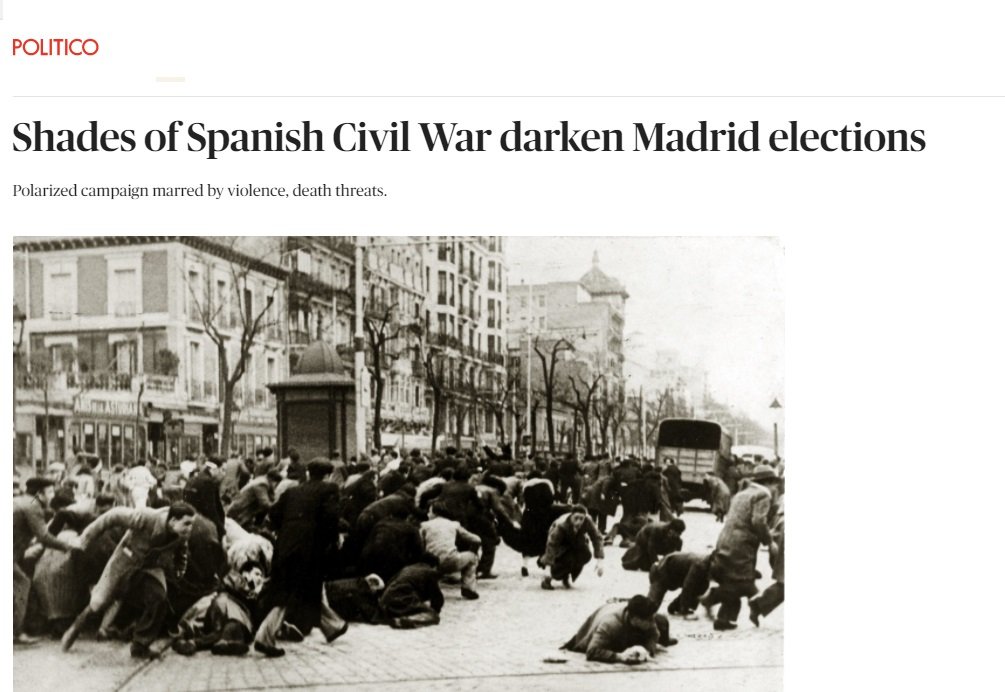 Capture of the cover of 'Politico'

The UK is the foreign country whose media have dedicated most news to these elections. The Financial Times headlines: "Head of Madrid government looks to exploit lockdown fatigue." The paper defines Ayuso as "the rising star of Spanish politics" who is "eclipsing PP leader Pablo Casado" and sees a plebiscite in tomorrow's results on "the future of the right and of Spanish politics."

But the leading British business daily goes further and warns of the emergence of a political profile in Europe in line with the Covid skepticism of some US leaders: "Díaz Ayuso is one of the few regional leaders in western Europe who has bridled against what she depicts as excessive coronavirus curbs, moving closer than many of her counterparts to the sceptical stance taken by the governors of Texas, Florida and South Dakota in the US." 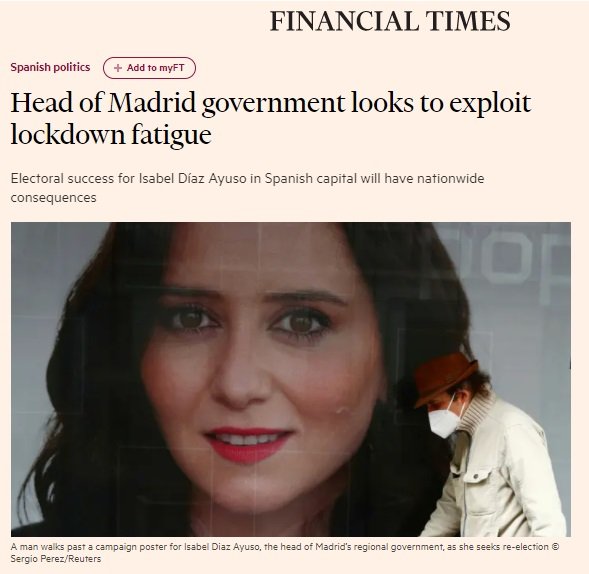 Meanwhile, The Guardian places question marks over the future of Madrid and the rest of Spain in relation to the results and governmental pacts that could arise from tomorrow's elections, headlining that Ayuso is a "lockdown sceptic" who is "poised for victory in the Madrid election". And it attributes her likely success to her strong pull for extremists: "Isabel Díaz Ayuso’s mix of bluntness, defiance and appeals to far-right voters appears set to pay off".

In parallel, The Guardian contrasts the rise in her popularity with the increase in deaths from Covid-19 and poverty: "Ayuso's stewardship of the pandemic in the region – which was home to almost 15,000 of Spain’s 78,216 Covid victims – has been bitterly criticised by many." And it concludes by mentioning another contrasting side of the Spanish capital: "Half an hour’s drive from the bars of Ponzano lies the shantytown of Cañada Real. Since last October, thousands of people living in Europe’s largest informal settlement have been without electricity. The power provider blames the outages on huge surges which, according to the Madrid regional government, are due to illegal marijuana plantations overloading the system." 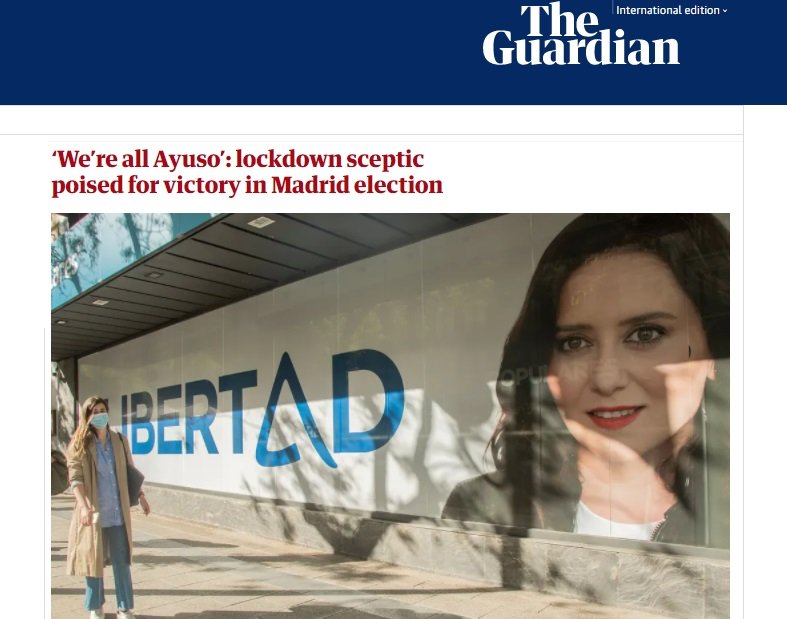 Story in 'The Guardian' on Tuesday's Madrid regional election.