The group Borikén Libertarian Forces claims to have carried out the protest action: "Neither kings nor invaders"

Spanish king Felipe VI has flown to Puerto Rico this Monday to celebrate the 500th anniversary of the founding of the city of San Juan. Some Puerto Ricans prepared a clearly hostile welcome for him: a statue of Juan Ponce De León, Spanish conquistador and first ruler of the Caribbean island, was toppled on the night before his arrival, and the protest action was claimed by the Borikén Libertarian Forces group. "Neither kings nor invaders," they exclaimed, making clear their opposition to Felipe VI's visit. In a statement, they stated that Juan Ponce de León was the first governor to "impose Spanish tyranny, which represents the worst." 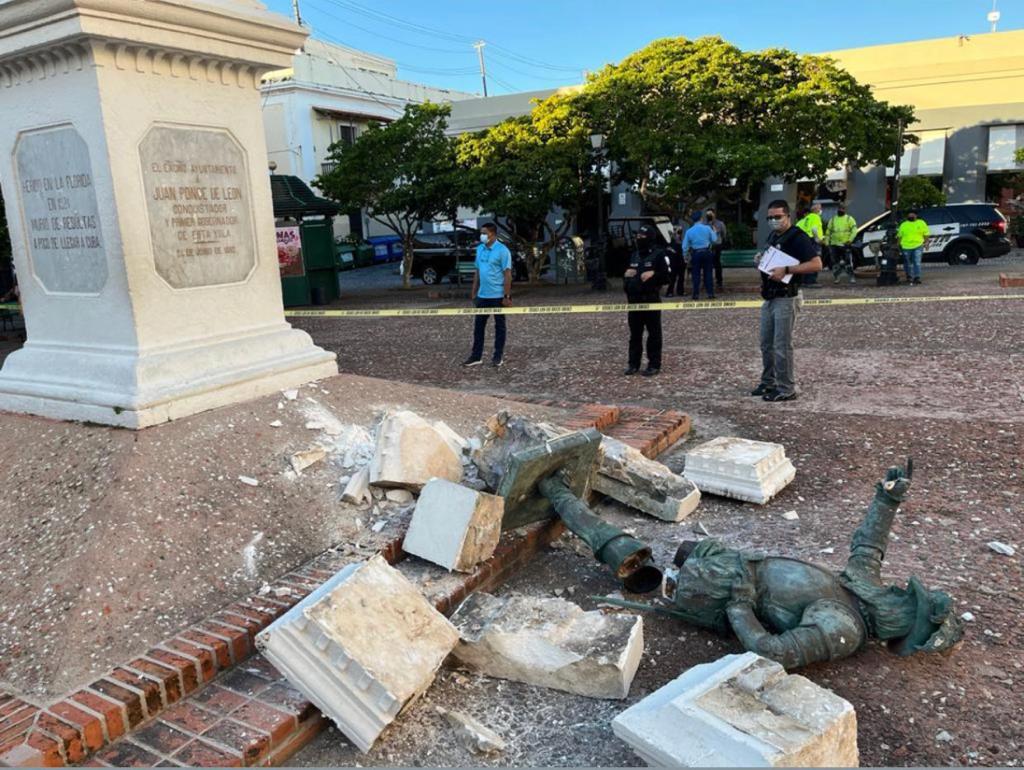 This morning, the sun rose on the Plaza de San José, in Old San Juan, with the statue of the Spanish conqueror demolished and the figure's legs cut off. Many residents of the island oppose the glorification of the colonial leaders, claiming that these represent "the crushing of our Taino ancestors who put up resistence." "History has not explained it well, but we will fight like the Borikén people," they said in a statement. The message against the Spanish monarchy is clear: "Felipe VI is a 'gringo' invader." Before the Borbon had even arrived on the Caribbean island, he had received a first expression of contempt, with the destruction of the symbols of what was once the Spanish Empire​.

Tweet translation:
"On the ground and broken into pieces. That was the condition first thing this morning of the statue of Spanish colonizer Juan Ponce De León, located in the Plaza Colón of the Calle San Sebastián in Old San Juan. It's being investigated by the San Juan municipal CIC."  — Hermes Ayala

Colonel José Juan García, a San Juan police commissioner, said officers patrolling the cobbled streets of the district heard a loud noise at 4:30am and found the statue had been toppled. “It sounded like an explosion,” he said. The statue, made of wrought iron forged from British cannons, depicts the Spanish explorer facing south with his left hand on his hip and his right finger pointing towards the first settlement he created. Christopher Columbus landed in Puerto Rico in 1493 accompanied by Ponce De León, who became the first governor of the island and fought the uprising of the native Tainos. Puerto Rico remained a Spanish colony until 1898, when Spain ceded the island to the United States at the end of the Spanish-American War.

Felipe VI was today due to begin a tour of the island with an agenda including a red carpet reception at the Spanish Royal House in Old San Juan, near the demolished statue. The Borbon is making this visit to Puerto Rico following an invitation from the mayor of San Juan, a city founded by the Spanish conquistadors in 1521. The monarch travels to the island on a mission of strengthening cultural ties, but in particular, with the goal of stabilising the current trade balance which is very favourable to Puerto Rico, an Associated Free State of the USA.

More royal spending in the spotlight

Late last week it was announced that the Spanish king had cancelled a royal house lease with the Volkswagen-Audi Group for a Bentley Bentayga, an exclusive SUV vehicle valued at more than 250,000 euros that had been paid from within the Spanish government budget, as digital daily El Confidencial published today. "The car was returned to the manufacturer early in June 2020 after the current head of state concluded it was not necessary for the development of the institution's own functions," the newspaper said. The vehicle had, in fact, been used by former king Juan Carlos I for hunting trips for three years, from the end of 2017, when the royal house assigned it to him, along with two other high-end Audi vehicles which other members of the family drove.

The tender was approved without dispute, with a final amount of 28,556 euros and a duration of one year, although it was automatically extended for the following years. The Bentley is said to have been used within the 4,000-hectare La Flamenca estate, located south of Madrid, in the Aranjuez Valley. This property has more than 60 positions for partridge hunting, located just a 45-minute drive from central Madrid. The service that manages the hunts guarantees discretion and organizes customized, confidential expeditions.