The Guardian describes Spain's efforts to dispel its "dark" legend

"No-one expects the Spanish Inquisition", the comedy group Monty Python once asserted. But apparently, no-one forgets the Spanish Inquisition, either. A report published in British daily The Guardian explains how Spain is making efforts to put a new spin on the persistent "dark view" of its history, epitomised by the legend of the Inquisition and atrocities carried out in its imperial era. As the UK newspaper points out, these efforts coincide with a time when Spain's present is also the subject of international focus, due to the political conflict over Catalonia, and right now, the verdict in the so-called wolf pack case, where five men charged with rape saw their offence reduced to the lesser crime of sexual abuse. 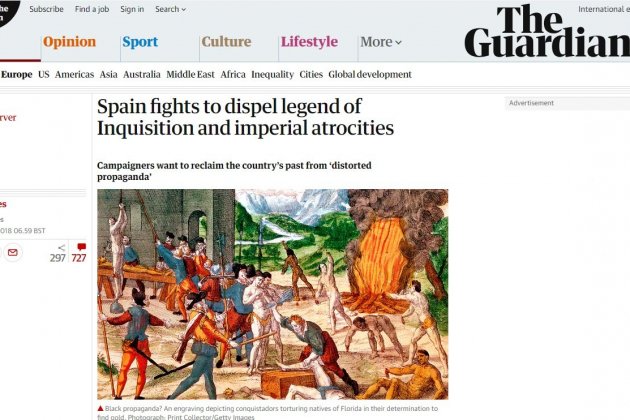 The Guardian's report explains that beyond the bulls, beaches, sun and sangria, "there lurks a dark view of Spain's past" - which Spaniards themselves refer to as the leyenda negra or black legend. It is an intepretation that according to writer Borja Cardelús has caused a fall in self-esteem among Spaniards.

Cardelús thinks that unlike Spain, other countries such as the US, the UK and France successfully used culture and education to foster a "more favourable international image". The article reports how a new group called the Hispanic Civilisation Foundation has been set up to try and give perceptions of Spanish history a similar makeover.

However, The Guardian also quotes historian Ricardo García Cárcel, who asks whether the "latest public show of anxiety over Spain’s international image has been prompted by recent events in Catalonia”. García Cárcel assures that the Catalan crisis is causing “the return of a phase which we thought was dead and buried. Spain is once again obsessively – almost neurotically – fixed on what other people think”.