In the end, Aragonès sends minister Vilagrà to awkward meal with Spanish king

The priority is not to leave the Catalan government chair empty in events and spaces that may be of special interest to Catalonia. Even if this means having to put up with the politically-awkward company of the king of Spain. Therefore, given the refusal of vice president Jordi Puigneró to replace Pere Aragonès as the representative of the Catalan government at the gala dinner to be held at the annual meeting of the Cercle d’Economia employers group this Wednesday, Aragonès's team decided to send not the president but the minister for the presidency, Laura Vilagrà, also of the ERC party. Apart from this, Aragonès and the Spanish monarch will coincide at an informal and private contact with a group of Korean businesspeople.

Vilagrà herself announced this during a press conference at the Generalitat palace, this evening. "The government always attends events when important issues for the Catalan economy are discussed," the minister explained. The participation in the Cercle d’Economia dinner with king Felipe VI at the head of the table has generated disagreements within the Catalan executive.

The differences started when Aragonès told this morning's Catalan cabinet meeting that he would not respond to the Cercle dinner invitation with the argument that he would already have been present at the venue throughout the afternoon. First, during the opening speeches and then at the reception for the Korean business gathering, an occasion without media cameras and with Spanish king Felipe also present. That seemed to cover the situation.

However, the opinion of the president and his inner circle, basically from ERC, is that the government cannot stop attending significant events just because the monarch is there - a practice that had occurred during the last legislature. The last episode was the visit in March to the SEAT automotive plant, which angered the company and eroded the image of the government in the business sector. ERC now wants to impose a change of relations and with this aim the president delegated vice-president Puigneró, of Junts, to be Catalan government representative at the gala dinner.

In fact, this was officially announced by the government spokesperson, Patrícia Plaja, during the appearance after the cabinet meeting. The surprise - for journalists, but also for the president and the rest of his team - was when the vice-presidency announced that Puigneró had decided to snub the king. Thus, the ball was returned to Aragonès. At the same time as the dinner, they explained from the ministry, Puigneró had already "planned and committed" his presence at the Night of Telecommunications.

The confusion over Puigneró's non-appearance

The vice-president, in fact, also planned to take part in the press conference at which his attendance at the Cercle dinner was announced, alongside government spokesperson Plaja, but at the last minute he stated he had an urgent issue elsewhere, to excuse his absence. A fact that aroused suspicions in the press room that were not resolved, and indeed were confirmed when his refusal to share a table with the Spanish king was communicated. 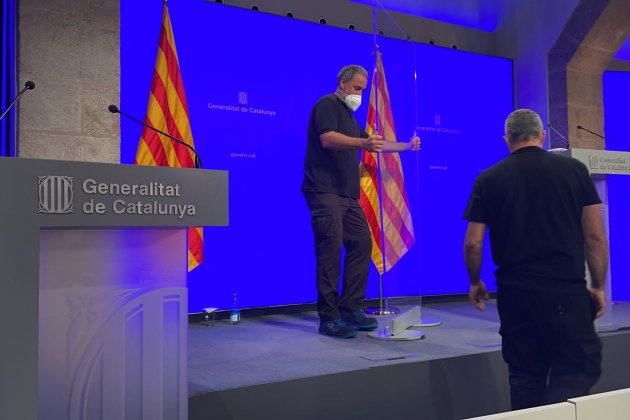 Technicians remove the lectern at which Puigneró was to stand. / M. F.

Sources close to Aragonès admit that they were perplexed by the last-minute announcement from the Junts leader. Some pointed to the pressure that was being exerted on social media by some prominent pro-independence figures.

In the main image, Vilagrà in second line behind Aragonès. / S. Alcazar