In the midst of the cascading scandals that are shaking the Spanish monarchy, the Pedro Sánchez government had prepared a landing ground for the visit of Felipe VI to Catalonia with the announcement made on Thursday night by the industry and energy minister, Reyes Maroto, of a new public-private consortium involving car producers SEAT and Volkswagen and energy company Iberdrola to build what will be the first plant in Spain producing batteries for electric cars. And this was the thread of this Friday's flying visit: to underscore, from the podium at the Seat plant in Martorell, the role of the Spanish state in the Catalan automobile industry.

As usual, the monarch's trip to Catalonia was protected by a large security operation. Demonstrators who tried to protest the visit had to do so from a long distance and amid controversy - as Mossos police removed a banner reading "Catalonia has no king". 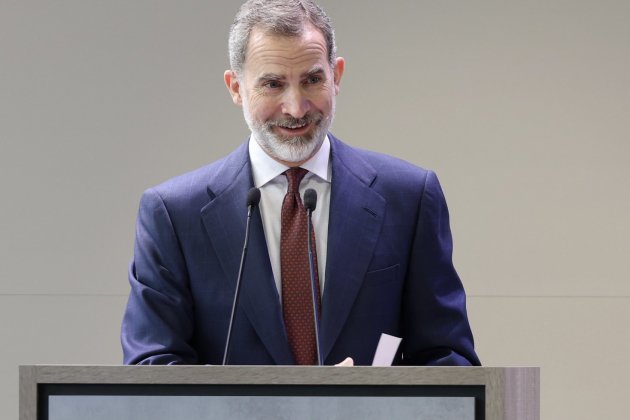 "Spain will be there"

"We need large doses of leadership and commitment to ensure that Spain's contribution to the automotive industry is in the place we deserve," the monarch advised in a discourse in which he assured: "Spain and all its institutions will be there."

Accompanying the monarch, in addition to prime minister Sánchez and the industry minister, was the Spanish government's delegate in Catalonia, Teresa Cunillera. There were no representatives from Catalan government there but the mayors of Martorell, Xavier Fonollosa (PDeCAT party), and the Socialists municipal leaders of Sant Esteves Ses Rovires and Abrera (Enric Carbonell and Jesús Naharro respectively) were present. Also, the automotive producer's  management board and directors, including the former minister Josep Piqué, the president of the works committee, Matías Carnero, and the president of the Foment del Treball employers' association, Josep Sànchez Llibre. The monarch was received by the chief of the Mossos, Josep Lluís Trapero.

In his speech, the king noted the role of public funds in ensuring the recovery of the sector after the crisis caused by Covid, which has left Spain as the EU country with the fourth-largest fall in new car registrations. Felipe VI recalled the benefits that the loans guaranteed by the state represented for this industry, with a total of 20,000 loan operations providing 2 billion euros in bank guarantees, as well as the flexibility granted by the ERTO furlough plans, which are helping 170,000 car industry workers and covering social security contributions worth an estimated 350 million euros.

He also referred to the nearly 2 billion euros foreseen in the new budget for the Mediterranean rail corridor, and the section that connects with Martorell. But the big star of the day's speech was the new battery plant and the consortium that is to make it possible, which the Spanish king highlighted "with special enthusiasm."

Catalonia and its audaciousness

At this point he made his only reference specifically to Catalonia and in the Catalan language: "I also want to express my special satisfaction in announcing all of this here, today, in Catalonia. A land that represents the globalist, audacious and entrepreneurial spirit that must be our identity in the times of change in the world which we are going to see," he said.

The speeches by the business leaders of the Volkswagen Group and SEAT, which explained more details about the new project, highlighted the need to ensure public support. "We can't do it alone, we need the support of the government, of the institutions," warned the chair of SEAT, while the leader of the Volkswagen Group, Wayne Griffiths, stressed that the transformation of this sector is an "historic opportunity" for the Spanish state.

At the end of the event, Felipe VI and Pedro Sánchez left, enveloped in the same security operation as they were when they arrived.

Below: Pro-independence protesters hang "Catalonia has no king" banners prior to Felipe VI's visit to the SEAT plant this Friday.

In the main image, king Felipe VI in the SEAT factory in Martorell / Sergi Alcàzar