On Tuesday, October 6th, a plenary session of Spain's Constitutional Court will address the constitutional protection appeal which Catalan president Quim Torra presented this morning with regard to his disqualification by the Supreme Court.

The president of the Constitutional Court himself has put Torra's resolution on the agenda of the plenary session, so that in very short order, the Spanish justice system will respond to the Catalan leader's appeal, which asserts that his sentence was unconstitutional.

Yesterday, the Supreme Court upheld the trial result under which Quim Torra was disqualified from holding political office for a year and a half, and fined 30,000 euros. The details of how this sentence will be executed are to be debated in the sentencing court, the Catalan HIgh Court, on October 5th, one day before the Constitutional Court session.

Justice, faster than ever

On the other hand, the Spanish government is taking its time with its side of the formalities, having not yet published the details of the dismissal of Quim Torra in its official gazette and therefore slowing down the Catalan government's procedure for the empowerment of vice-president Pere Aragonès and the reorganization of the executive until elections are called and a new government is appointed. 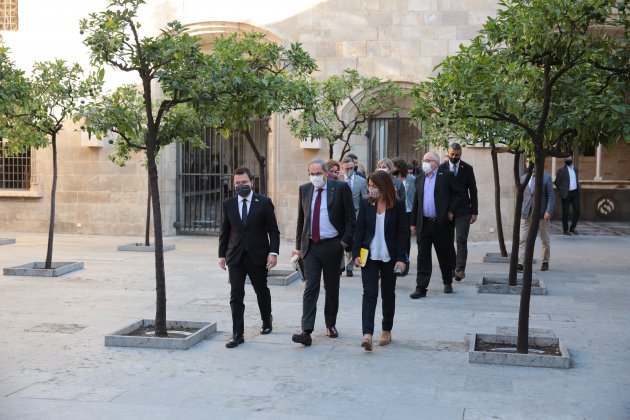 What does the Constitutional Court have to resolve?

President Quim Torra's lawyer, Gonzalo Boye, presented a 438-page writ this morning, stating that the entire judicial process has had a "manifest political intent" with the aim of "overthrowing the president of Catalonia and his government by means that are undemocratic and only superficially legal", which he considers a" true constitutional fraud".

The text reiterates the arguments already presented before both the Catalan court and the Supreme Court. Thus, Gonzalo Boye alleges that parliamentary inviolability, the rights to freedom of expression and ideology and the political representation of his client have all been violated. He also considers the conviction disproportionate for actions which he does not see as criminal.

The defence considers that Spain's Central Electoral Commission was not competent to order president Torra to remove the banner from the balcony of the Palau de la Generalitat and to "construct a crime of disobedience", but was only empowered to penalise him administratively or communicate actions to a criminal court. Therefore, he believes that Torra could not have foreseen this criminal judicial response to his actions, aggravated by "the unpredictable change in jurisprudence." In fact, the appeal notes that Torra had already been administratively fined by the electoral body for the same actions and asserts that his disqualification from all areas of public office and even from running for elected office is unconstitutional.