The electoral countdown started by a court: Catalonia to vote in early 2021

Today's Spanish Supreme Court decision has set in motion a timetable which, unless there is a last-minute surprise, will take Catalonia to the polls on January 31st or February 7th next year, according to the talks underway between the two governing Catalan parties, JxCat and ERC. This is one of the consequences of the court's decision to ratify the sentence of disqualification from office of the Catalan president, Quim Torra, for having disobeyed the Central Electoral Commission when it ordered him to take down the banner of support for the imprisoned pro-independence leaders from a balcony of the Generalitat palace.

The Catalan election calendar is one of the points that has remained open until the last moment in the talks between the two Catalan parties to articulate the response to the disqualification of Torra. Both the two spokespeople, ERC's Marta Vilalta and JxCat's Elsa Artadi, mentioned this afternoon that loose ends were still to be tied up before an agreement could be closed. Artadi stated that these small issues depended on the ability which the speaker of the Catalan Parliament, Roger Torrent, will have to affect the calendar.

Although the regulations clearly set out the deadlines for the dissolution of Parliament in the event that there is no candidate to replace Torra a report from the Catalan government's legal advisors indicates that the speaker could have some power to influence the date of the election. However, a report from the Catalan parliamentary legal counsel takes the opposite view: no such ability.

According to the government's legal report, although the speaker now has a first period of ten days to consult the parliamentary parties and propose a candidate, the session to vote on a new presidential candidate could be called in those ten days but held later. The importance of this session, at which a first vote on a proposed new president would be held, is that it will be the mechanism that activates a two-month countdown, after which if no new Catalan president has been selected, Parliament is dissolved and elections are called.

The 10 day period has never been exceeded

The parliamentary lawyers' report, on the other hand, makes it clear that the precedents from the last twelve legislatures indicate that this term of ten days has expired without being exceeded on three occasions and in the other cases the ten day period has not even been used. The process has never gone further than this, says the legal team.

"The establishment of this brief period of only ten days to propose a candidate aims to promote the creation of a government in a short time, and avoid the prolongation of a temporary situation, with an acting government, because if this situation lasts too long, it could lead to a serious anomaly in the institutional system", warns the parliamentary legal report to which ElNacional.cat has had access.

The report also addresses other issues negotiated by JxCat and ERC. It notes that the vice-president, Pere Aragonès, would temporarily replace the president, but stressed that "the substitute must hold the presidency without holding the office of president, because he is not called upon to complete the mandate of his predecessor". However, taking into account that this temporary situation can be extended for several months (the two months that are activated once the first 10 days have passed without being able to appoint a new president, plus the deadline for then holding elections, and after this, the time for the constitution of the new government), the lawyers' report warns that the vice-president must be submitted to normal parliamentary checks on his actions “directly tied to his role in the actions taken by the acting government”.

"This may lead to the answering of oral questions in a parliamentary session." However, the report points out some ambiguities in this and accepts that two parliamentary organs, the Bureau and the Board of Spokespeople, could establish interpretative criteria in this regard.

"No" to any candidate without possibilities

The lawyers’ report also mentions the possibility that, after the ten days allowed for party consultations, a candidate who does not have sufficient support to be elected could be presented. This would be the case, for example, if a proposal were submitted from a candidate from Ciudadanos, the party that finished with most seats in the 2017 election, but was unable to govern because the pro-independence parties, as a block, formed a majority. 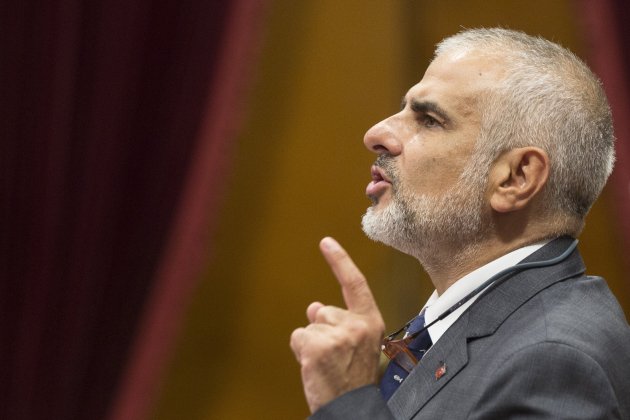 The president of the Cs group, Carlos Carrizosa, in Parliament / Sergi Alcàzar

Parliament's legal services consider that if there is no candidate with a chance of being elected, "it does not seem logical to propose another who will stand without any chance of succeeding" and with the sole aim of activating the two-month clock until the dissolution of Parliament.

"If this possibility were accepted, it would affect the institutional and neutral position of the speaker" warns the legal report, since this scenario would mean the speaker was only accepting such a candidature for the benefit or prominence of the candidate him or herself.