"There is nothing more important in my presidency than fighting the virus and helping the 7.5 million Catalans. That is why we needed to strengthen the government and inject renewed energy into departments that are crucial for getting ourselves out of this situation." This is how the Catalan president Quim Torra justified the changes he has made this Thursday in the leadership of three of his government ministries: enterprise, interior and culture.

In his speech at the swearing in of the new enterprise and interior portfolio holders, Ramon Tremosa and Miquel Sàmper respectively, Torra said that "these departments will play a very important role in the coming months." "That's why I make a commitment to appoint people who I think can achieve a better result, I have no other interest," he asserted in the face of criticism from the opposition, which accuses him of having made the changes following the power struggle between two Catalan political parties, JxCat and PDeCAT. 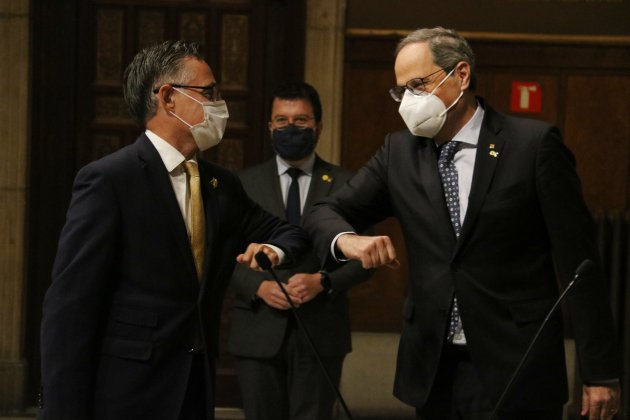 The Catalan leader thanked the outgoing ministers for their work, in a conciliatory tone: "You have served your country unhesitatingly, dedicating all your available time to raising it from the ashes of article 155 and recovering the spirit that has to take us to the Catalan Republic". "You accepted a difficult assignment at an uncomfortable moment. I thank you emphatically and publicly for the work you have done up till now. The country needs people like you," he reiterated.

Torra also thanked the new ministers for their decision to join the executive "at a crucial time for the country as it is today". “Your work, your spirit of service, is and will be a stimulus,” he said.

Aware of the uncertainty hanging over the legislature and his own presidency - with the Supreme Court due to decide on his disqualification from office in two weeks' time - Torra played down the situation. "I am not concerned because I know that there are very valuable people around me who are extremely capable and talented. The important thing is collective determination and commitment," he said.

So, after today's event, all that remains is for the new culture minister, Àngels Ponsa, to be sworn in next Tuesday.

Later this evening, at the presentation of the International Prize of Catalonia to Kenyan writer Ngugi wa Thiong'o, Torra appealed to "never give up your freedom of expression", words that surely also refer to his court case - centred on a banner calling for the release of political prisoners, which he refused to take down.