The visit of Quim Torra and Carles Puigdemont to Cotlliure this August was not limited to a tribute at the tomb of Antonio Machado. The two Catalan presidents, one current, the other exiled, took advantage of the meeting in the Northern Catalonia coastal town to try and settle issues still pending, including the electoral calendar. Torra wanted to call the Catalan elections before the Supreme Court hearing on his disqualification from office on September 17th. But this idea was not shared by either Puigdemont or the leadership of JxCat, still in the process of coming together as a party, who did not hide their wish to hold back the agenda, even if this meant that it would be the Supreme Court which would overthrow the Catalan president. Or precisely for this reason, so that the Supreme Court would end up removing an incumbent president of the Generalitat of Catalonia for having hung a banner on the balcony of the government palace.

The final agreement between the two presidents, according to sources close to their discussion, meant that Torra - who had tried unsuccessfully to set the elections for October 4th - accepted the proposal of not calling elections, but, in return, JxCat accepted the government reshuffle as decided by the current president. The meeting, with a photo-walk included, had been completed satisfactorily for all parties.

Thus, after this, the situation of the Catalan interior minister, Miquel Buch, was one of the issues on the table in the president's office. Torra has not hidden his criticism of the interior ministry for the actions of the Mossos d'Esquadra police over questions such as their response to last October's protests after the independence leaders' trial verdicts. Nor has the minister himself concealed his displeasure over this circumstance. In fact, Buch had made it clear that he had no intention of continuing as interior minister this autumn so as not to have to address, again without the president's support, possible protests on the 1st October anniversary.

Buch, whose work - despite criticism from pro-independence sectors - has received a more positive assessment within his department, had expressed this wish to leave the post to many he spoke to, even mentioning his intention to switch roles to the private sphere. However, the minister did not hide his dissatisfaction with the way that Torra dismissed him today and that the decision was framed in the internal struggle on the centre-right of the pro-independence sector, between JxCat and PDeCAT. 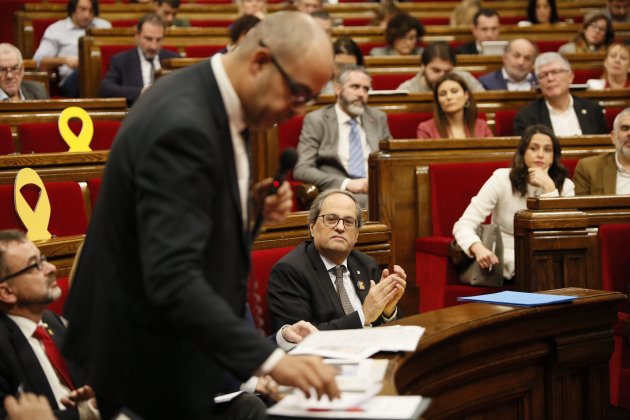 Buch and Torra, during question time in the Catalan Parliament  / Sergi Alcàzar

Buch is replaced by Miquel Sàmper, lawyer and president of the municipal group of Junts on the Terrassa city council, considered close to the imprisoned Josep Rull - in fact, also in the municipal group is Meritxell Lluís, Rull's wife - and he is also close to Jordi Turull, thus not altering the internal balances in JxCat.

Sàmper, a former president of legal body Catalonia Lawyers Council, is also a well-known figure in the pro-independence world. His name came up during the Supreme Court trial of the pro-independence leaders when a Civil Guard accused him of having “incited the masses” during searches at Unipost headquarters a few days before the 2017 referendum.

A blow to PDeCAT

While Torra was preparing for his government reshuffle, it was the conflict with the PDeCAT led by David Bonvehí that ended up exploding and interfering with his plans. After the dispute between JxCat and the PDeCAT for the electoral brand of the former, and after PDeCAT decided to take Puigdemont's new party to court, the Catalan president decided to send a message to the rival centre-right party. He has removed from his executive and one of the most-trusted PDeCAT leaders, in the most senior government position: the current enterprise minister, Àngels Chacón. Chacón, with a balanced and discreet profile, was well-accepted as a leader of the business sector, and did not appear as part of the expected list of changes to the executive. 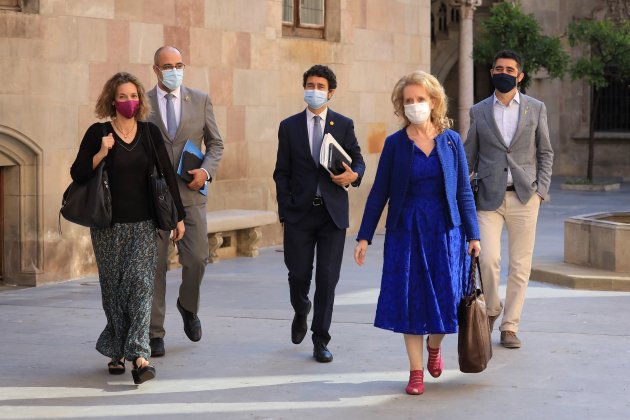 On the other hand, the minister had been mooted as one of the most likely names, along with the mayor of Igualada, Marc Castells, to lead a possible solo candidacy of the PDeCAT in the parliamentary elections.

It remains to be seen what effect this decision will have on the already-battered relations between JxCat and PDeCAT. For now, members of the party leadership have called for "serenity" before any pronouncement on the issue is made. However, the PDeCAT has raised voices of protest, with the mayor of Igualada calling Chacón's removal from government "undeserved".

Translation:
"I had the honour of working alongside @angelschacon in Igualada, where her great work made her a political asset for the country, and for this reason she was appointed minister of the Catalan government. As a director at @empresacat, she has carried out brilliant management, undeservedly brought to an end."— Marc Castells

Chacón is replaced by former PDeCAT MEP Ramon Tremosa, who has been frequently tipped for Catalan cabinet roles since he left European politics. During his time as a Member of the European Parliament and as Economic Coordinator for the Liberal Group in Brussels, Tremosa gained access to a very broad range of European contacts. Indeed, this must be one of the objectives of his appointment: to strengthen the voice of the Catalan government in Europe.

There was, however, a third folder on Torra's table. In fact, it was the one on top of the pile. The president has never hidden his desire to bring Laura Borràs back to his side. The current JxCat leader in Madrid has been a person in Torra's closest confidence, ever since they shared an office in the Catalan Parliament with Francesc Dalmases.

His goal was to once again place her in the Culture ministry in Barcelona, but also with the responsibility of government spokesperson. Borràs has Torra's support to aspire to the JxCat candidacy of the Catalan presidency, and this function would guarantee her the maximum projection.

However, Torra's plans met several obstacles, which in the end derailed them. Firstly, the response of Turull, who did not accept that one of his trusted figures in the Catalan government, the presidency minister Meritxell Budó, would lose the role of spokesperson. Turull did not hesitate to challenge president Torra on this issue from the position that has always been attributed to him, that of legitimate minister of presidency - as the office holder in 2017 who was removed from the role by article 155, and then imprisoned.

Keeping the balance in Congress

In addition, Borràs's planned departure from the Spanish Congress would have posed a very complex situation in Madrid, where JxCat deputies are split fifty-fifty due to the break with the PDeCAT. The absence of Borràs would have given much more strength to her fellow MP Ferran Bel, secretary of organization of the PDeCAT, and JxCat saw it as too risky to surrender this space to one of the heavyweights of the rival party. 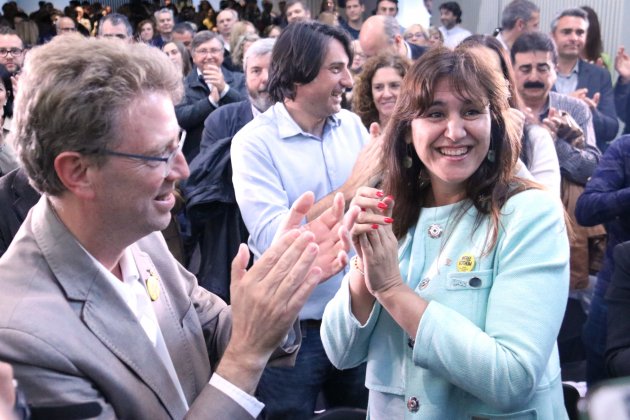 Ferran Bel and Laura Borràs, at an election event  / ACN

Finally, after failing to come up with an alternative proposal, Torra had to give up his plan. Culture is placed in the hands of Àngels Ponsa, also close to Josep Rull and Jordi Turull, so that the voices of the political prisoners in Lledoners jail are not only preserved but reinforced.

Thus Torra has made his government crisis moves, although not the way that he would have liked to, and it will be the Supreme Court which decides whether it will claim the head of a sitting Catalan president for having hung a banner on the balcony of the Generalitat palace.