Puigdemont: "Now we need to be activists for Catalonia"

Catalan president Carles Puigdemont has appeared this Saturday at the presentation of Together for Catalonia (JuntsXCat), the candidature he is leading for the Catalan elections of 21st December, affirming that "now we need to be activists for Catalonia", not "just" for one party, with the president highlighting the "transversal nature" of the list.

At an event held near Bruges - Puigdemont and part of the Catalan government have been residing in Belgium since 30th October - the president defended that JuntsXCat is the candidature that most resembles the concept of "unity", which is the "demand" of a large part of the citizens of Catalonia, in the face of the current situation, with article 155 in force and the government partially "in exile" and partially in prison.

In this regard, he thanked the candidates that have taken the step of joining the list - even though some have never taken part in politics - as well as the "generosity" of his party, the PDeCAT, in "avoiding factionalism".

Puigdemont remarked that the election on 21st December will not be held in conditions of "normality" or "equality" - giving the example of the ministers who are imprisoned, as well as the very event he was speaking at, taking place in Belgium - but he appealed for Catalans to get involved in "the most transcendent election in our history". In this situation, the president asserts that JuntsXCat has to be "the list of hope" with which "to write history", in contrast to the candidatures of "fear" or "resignation" who are already "represented". "We are a list that is 'votable' by a large part of our fellow citizens", he assured.

Against Rajoy and the "triumvirate of 155"

The unionist parties - the Popular Party (PP), Catalan Socialist Party (PSC) and Citizens (Cs) - which Puigdemont branded as the "triumvirate of 155", were the focus of the president's criticisms, and he said he wanted to see them "defeated at the ballot box". "The election is all about whether the triumvirate of 155 wins or loses", he stated, adding that, if there is one list which they do not want to win, "it is ours". Similarly, he asked whether those parties will accept the election result - a question he extended to the president of the European Commission, Jean-Claude Juncker. "It has to be guaranteed that what the majority of Catalan citizens want will be applied", he added.

Referring in particular to the Spanish PM Mariano Rajoy, Puigdemont announced that if unionism loses the election we "will ask for this to have consequences", in clear reference to the current implementation of article 155 of the Constitution. The president also criticized Rajoy "for wanting to be the saviour of the homeland", and in contrast to this, he highlighted those who "want to be the servants of the people".

Reprimands against the EU

Puigdemont also attacked the European Union for giving "carte blanche" to Rajoy, with the goal of resolving "what for them is a problem". The leader of JuntsXCat believes that they "have let him do what he wants" and now it is important "that they see on the 21st that Mr. Rajoy's credit has run out, and that he has to pay that credit back", he asserted.

The president also added that, if Europe desires to give lessons of moral authority to countries like China and Turkey, "what it has to do is not allow civil rights to be violated at home" - a statement greeted with applause by the JuntsXCat candidates who were present with him during the event.

At the end of the event, which concluded with speeches by Catalan ministers Lluís Puig and Clara Ponsatí, the 90 candidates of the JuntsXCat list posed for the cameras. 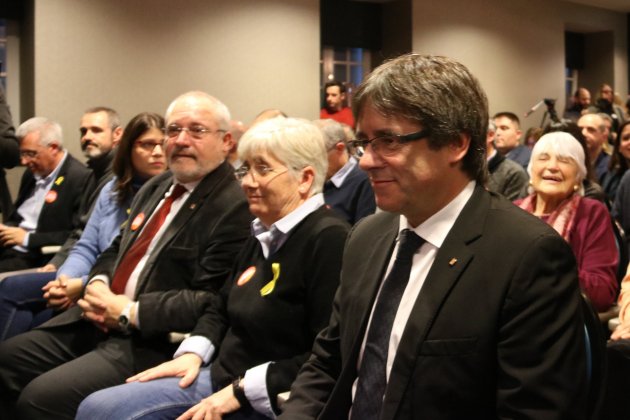 The candidates then withdrew for a working meeting behind closed doors, with a stroll through the centre of Bruges planned for the afternoon. According to the organization, the return journey for candidates who had travelled from Catalonia was also planned for Saturday.