A former Spanish government delegate in Catalonia, Enric Millo, has proposed "deprogramming" of independence supporters as if they were a "sect", and has justified this on the basis that there is no political solution that can resolve the conflict.

"This has no political solution, it requires an intense exercise of sect deprogramming," he said in a tweet. 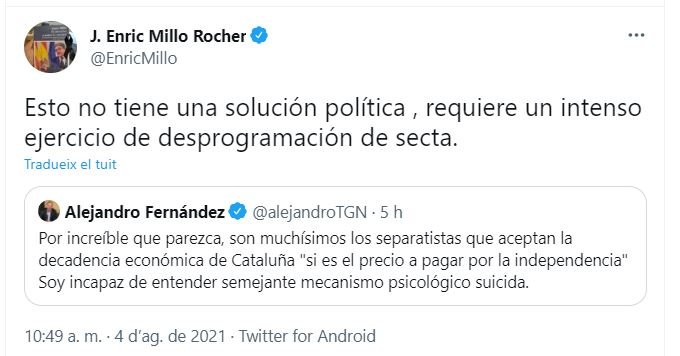 Millo, now a senior official in the Popular Party-led government of Andalusia, made the statements in response to a tweet from the party's leader in Catalonia, Alejandro Fernández, asserting that there are Catalan independence supporters who would accept splitting with Spain even if it was economically detrimental for Catalonia.

"Incredible as it may seem, there are many separatists who accept the economic decline of Catalonia if it is the price to pay for independence. I am unable to understand this suicidal psychological mechanism," affirmed Fernández.

The Terrassa-born politician Millo, who represented the Catalan nationalist party Convergència before joining the PP, was the senior representative of Mariano Rajoy's government in Catalonia at the time of the 1st October 2017 referendum. In June last year he claimed that he "did not know there would be police charges on 1st October." "I tried until the last moment to prevent all that from happening," he asserted, adding that "they wanted to get to the end of the confrontation route to see what happened," referring to the Catalan government led by president Carles Puigdemont.

After his time in the delegation of the Spanish government in Catalonia and in the application of Spanish direct rule under article 155, Millo decided to continue his political career in Andalusia, in the PP-headed government that took power in 2019.

"I live much more calmly, because in Andalusia I can walk down the street without anyone insulting me, without anyone threatening me, without a bodyguard... It's a very different situation. People in Andalusia have a very friendly way of being. People live differently... there are also stereotypes of Andalusia that I myself have discovered to be false, people work hard, there is a lot of drive and a lot of talent and entrepreneurial ability," he has said.