Pablo Iglesias is the person in the Unidas Podemos political space who has been most important in Catalonia. But a week ago the Ayuso tsunami swept him away from political life, and now there are new interlocutors. This is the case of new Spanish third deputy PM, Yolanda Díaz, who today held a meeting with Gabriel Rufián, congressional leader for the Republican Left (ERC). The Spanish labour minister raised the flag of dialogue and opted to "restart the legislature" with a return to the parliamentary majority that allowed the PSOE-Podemos government to form 17 months ago. The ERC leader backed the same approach. They are to have more meetings. There was talk of legislative reforms and the situation of the Catalan political prisoners.

From the headquarters of the employment ministry, where the meeting took place, Gabriel Rufián, in addition to showing a easy relationship with the minister, explained that two different agendas were discussed. The first, the legislative agenda. After last week's elections in Madrid, he said, "a new legislature is beginning." His diagnosis is that "the left, to the left of the PSOE, beat the PSOE", and that in the Moncloa government palace this should be noted. In this context, he assured that this is "just another meeting" and that, also, they will continue, because "they can greatly favour politics in our country and in Spain". As an example, he referred to the repeal of the labour reform law brought in by the PP in 2012.

The second agenda was that of the Catalan political conflict. The ERC spokesperson in the Congress of Deputies stated that "we share many diagnoses and even solutions". The main consensus in this regard, that "the time has come to make decisions", to unblock measures that are currently "paralyzed". Asked to give more detail on this issue, he answered clearly and unequivocally: we must end the "situation of people imprisoned in an unjust and savage way." He concluded that "as democrats, it's up to us to talk about this." 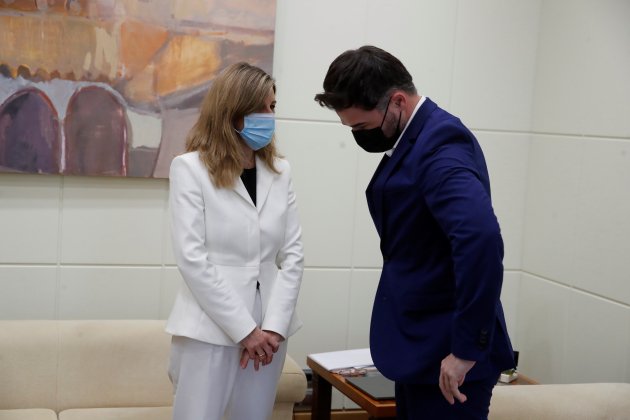 After Rufián, Yolanda Díaz spoke, confirming the easy personal communication between the two. In this regard, she spoke of a "wind of change" and said that it is "key" that "Catalonia is in the labour core" in Spain. “We want to be able to depend on the Catalans”, said the Spanish minister. She claimed that the government's policy is based on "dialogue and the search for solutions". And with regard to the Catalan political conflict, promising to "work to normalize our relations." She added: "Any conflict can only be resolved through mutual understanding, stitching together and dialogue. The opposite is anti-politics."

As for the reconstruction of the investiture majority - in which the PSOE and Unidas Podemos were supported by ERC and other left and nationalist parties of Spain's periphery - the labour minister said that "a new phase is beginning in which you will see us together many times" and that she will work to "bring together the parties that supported the investiture". That is why she will maintain constant dialogue with ERC and the other progressive formations. It is time to "restart the legislature," she concluded.