Sánchez lands in Puigdemont's village: indifference and a demand from Vergés

The Spanish prime minister, Pedro Sánchez, landed in Carles Puigdemont's hometown, Amer, in the Catalan comarca of La Selva, this Friday. He did so to visit the company Hipra, dedicated to the research and production of vaccines, and was accompanied by his health minister Carolina Darias and science minister Pedro Duque. The group from the Spanish executive managed to break the institutional boycott that is the usual response to institutional visits to Catalonia from the Spanish state: the Catalan health minister, Alba Vergés, did attended today's meeting. But the tension nevertheless remained.

Vergès presented herself in Amer in a yellow overcoat and with a folder full of demands, relating to both vaccines and political dialogue. The mayor of the town, Maria Rosa Vila, of the Junts party, was also present, wearing a symbolic yellow ribbon. Vergés avoided the group photo. In his speech, Sánchez mentioned the Catalan minister, but not the mayor; sources present at the event say that she did not even receive the greeting of the Spanish PM. In fact, a strange protocol in which political leaders avoided each other in front of the cameras ended up being the order of the day, today in Amer.

The residents of Amer, for whom Hipra is a significant entity - since it is an important employer in the county - received the visit by Sánchez with absolute indifference.

Barely a dozen people gathered behind the security cordon, far from the factory, on the outskirts of the town, to express their protest. Apart from this and the police security operation that shielded the area and blocked the access road to the factory, nothing changed in daily life on the streets of Amer. 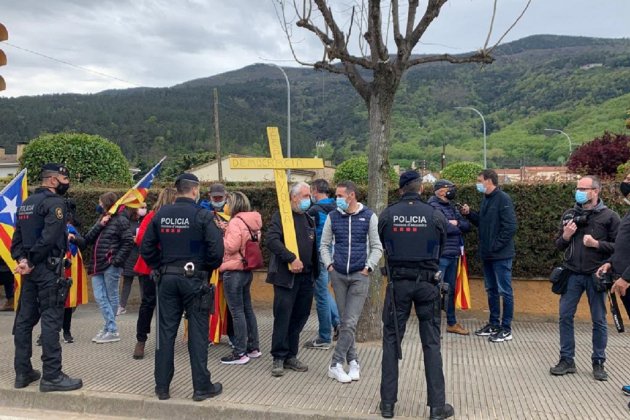 "Protests? On the contrary, fewer people than ever," said the proprietor of one of the bars in the town square, full of pro-independence estelada flags and presided over by a huge image of Puigdemont with the slogan "No surrender", written in English.

Sánchez's trip was announced last night. The Spanish government invited the acting Catalan vice-president, Pere Aragonès, to accompany the group, but the ERC leader, who had visited the factory himself last week, passed the buck to Vergés. No one, apart from the official party, was able to enter the plant. The press had to follow the visit from the street, from outside the fence around the premises.

Upon his arrival by car, as part a long motorcade, Sánchez visited the factory installations, posed for a group photo, and gave a speech in which he expressed gratitude for the commitment of the company and of Catalan and Spanish industry "to its compatriots" in the toughest moments of the pandemic, through the manufacture of PCR tests as well as respirators using 3-D technology.

He assured that between April and September, the arrival of 87 million doses of vaccine in Spain will allow the vaccination of "all compatriots, wherever they live", and he appealed to unity.

"One of the great lessons of this pandemic is that there is strength in union. From the Generalitat of Catalonia, from whom we are accompanied by the minister, from the municipalities, from the Spanish government, we have been able to work side by side," he stressed.

The demands of Vergès

The Catalan minister took advantage of the visit to call for the delivery of the promised vaccines from Sánchez and the Spanish health ministry "as soon as possible". She called for more clarity in the vaccination strategy and warned that if she could go to Europe to look for them herself, she would. "Because we can't, it's up to us to demand that these tasks are carried out from the Spanish state, so that the information is clear," she explained.

At the end, and after Sánchez's brief speech calling for unity to overcome the pandemic, Vergés went back to the Spanish PM to urge him to resolve the Catalan conflict. "People work well and are united when political conflicts are also resolved," she asserted, calling for the situation of Catalonia to be faced squarely.

Sánchez then returned to his car and the fleet of vehicles that accompanied the three members of the Spanish government left Amer amid the same atmosphere of indifference in which it had arrived.