Morocco's press explodes: "What would happen if we welcomed Carles Puigdemont?"

Diplomatic tensions between Spain and Morocco are high over the Ceuta crisis and media in both countries are full of it. Surprisingly, an examination of the Moroccan press shows that even newspapers not normally sympathetic to the regime of king Mohammed VI are launching criticisms of the Spanish government for its fierce response to the arrival of undocumented migrants in Ceuta. The clearest example is found in this Wednesday's editorial in the newspaper Al Ahdath Al Maghribia, an independent, socialist-oriented publication that is warning Spain not to get involved in what it sees as Moroccan internal affairs and the dispute with the Sahrawi people, a key factor in the current crisis.

To makes its case, it makes use of a comparison and directly challenges the Pedro Sánchez government: "To turn the equation around, what would happen if Morocco had given its support to the Catalan referendum of 2017 and Carles Puigdemont had been welcomed and our foreign minister had declared that it was for humanitarian reasons but in no way would affect the relationship with Spain? They tell us that Carles Puigdemont betrayed them, broke the law and put pressure on the judicial power, and ended up accusing him of committing crimes against humanity". 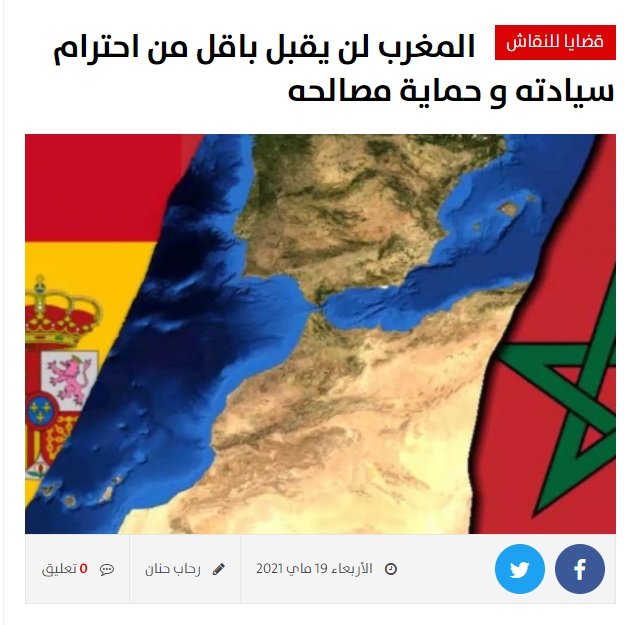 "We will not be Europe's police force"

The newspaper's editorial warns that if Morocco didn't position itself in favour of the 2017 Catalan referendum, then Spain should behave similarly now and not give refuge to the leader of the Polisario Front, Brahim Ghali, who arrived in Spain under a false identity and was admitted to a hospital in the city of Logroño to recover from Covid-19.

Taking the parallel even further, Al Ahdath also puts the question of how Spain would have reacted if its sourthern neighbour had taken in Catalan president Puigdemont "under a different identity". And it refers back to the situation in October 2017: "Spain was experiencing an unprecedented crisis at the time. And what did Morocco do? In line with a long history of good relations, it rejected secession. And this was done because we are neighbours, we have a good economic, political and cultural relationship and our foreign ministry rejected the unilaterally independence of Catalonia, in favor of national integrity".

However, as the newspaper goes on, if the welcome shown to Ghali is not rejected immediately, all these Moroccan good intentions could end. The country could "reconsider its relations of cooperation with Spain" especially in matters of immigration and fishing. And the paper warns Sánchez warns that the migratory avalanche which has reached Spanish territory in recent days may be the prelude to an unstoppable wave: "Morocco cannot limit itself to playing the role of a police force to protect the interests of a neighbouring country that does not respect what is most sacred, its territorial integrity, and if Spain thinks that Rabat will understand that it receives a dangerous criminal and goes against international law, Morocco has the right to review many issues on which agreement has been reached in the past, such as continuing to save the Spanish fishing industry, which is clearly in trouble".

Moroccans feel abused. First comes a migration crisis, and then there could be an economic crisis in the Mediterranean fishing industry. And behind all this, a grievance that is far from new: the "colonial past" whose wound is still deeply felt, and they dislike having become a country where immigrants from sub-Saharan Africa, the Middle East and even Asia take up residence "because of the restrictions imposed from Europe." They blame Spain's "Francoist past" for the country's "misunderstood sovereignty" that has always discriminated against them. But now, however, they don’t want to go back to traditional responses. The editorial concludes: "Morocco will accept nothing today other than protecting its interests."