"Get out of our neighbourhoods, Colau", the chant that surprised Barcelona's mayor

The call for a mass whistling of the mayor of Barcelona, Ada Colau, taking advantage of the opening speech of Barcelona's festa major, La Mercè, had been spread widely enough to bring together a miscellany of groups with one thing in common, to express their rejection of the current municipal government's management.

The jeer campaign was not announced by anyone in particular, but rather, was a reflection of widespread discontent, and at the moment of truth half a dozen groups turned up, each with their own demands, which, within a certain ordered chaos were distributed around several points adjacent to a Plaça Sant Jaume, the city's central administrative square, which was completely blocked off by the two police forces of the Guàrdia Urbana and Mossos d'Esquadra, with screened entry for those who were duly accredited or in possession of one of the 600 reservations to witness, from the square, the acts to set the Barcelona festival in motion. 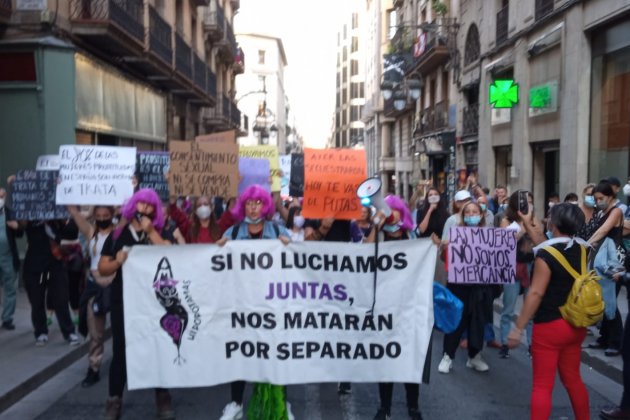 For 45 minutes before the start of the proclamation address, set for 7pm, taking a walk around Plaça de Sant Jaume meant coming across groups, first of ten or twelve people, which little by little began to grow. By the time this year's invited speaker, the veteran activist Custodia Moreno, started her proclamation speech, there were already at least six different groups, each with its own mobilization, but all uttering similar chants, calling for Colau's resignation.

On the one hand, a group opposed to home evictions gathered in front of the Novíssim city council building, on Plaça Sant Miquel, while on the other side of the same square, was another group protesting against the communist dictatorship in Cuba. In Carrer Ciutat, where the official guests entered to hear Custodia Moreno's speech, a varied but sufficiently-loud group with a megaphone chanted something Ada Colau did not expect, 'Colau, get out of our neighborhoods', a true torpedo-on-the-waterline for a political leader who has taken pride in being, precisely, the voice of the neighbourhoods.

Shouts of 'Get out, Colau' / Mar Acero

In Carrer Jaume I, a pro-independence group and another protesting against prostitution coincided, and finally in Carrer Ferran, another pro-independence group accused those entering to listen to the festival launch of being "traitors" and "adulators". Finally, a large group of workers from the city television channel, Betevé, also made their protests heard - right now they are on a partial strike - at various points around the square.

They were collectively very noisy - even though in total they hardly exceeded three hundred people - but kept the whistling up for the whole duration of the proclamation, which was impossible to follow from the street, where it was relayed by a PA system.

The final surprise of the protest took place inside the square, when a group of infiltrators from the CSIF union, which has a significant presence in the city police, the Guàrdia Urbana, managed to unfurl a banner protesting against the mayor - until their own colleagues forced them to withdraw it. 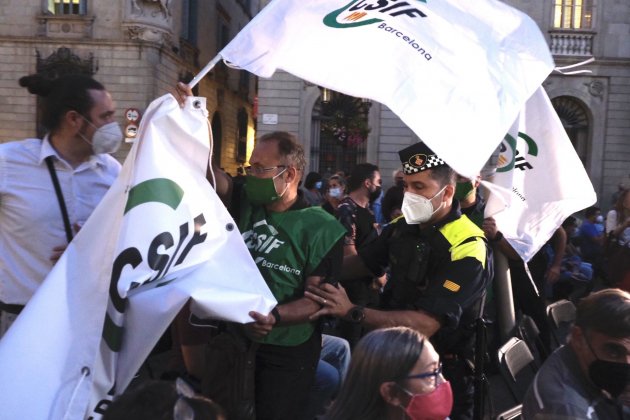 The whistles went on for quite some time and although the different rallies were nothing if not heterogeneous, the message should have reached the Casa Gran loud and clear. Ada Colau, despite the theoretical refuge of a square blocked off by police, can hardly ignore them.

Main image: Protesters whistling the mayor, despite being quite distant from Plaça Sant Jaume / Carlos Baglietto