Junts calls on ERC for unity, both in dialogue and leveraging their votes in Madrid

The summer break has not been sufficient to set aside the differences between the two Catalan governing partners, Republican Left (ERC) and Together for Catalonia (Junts) over the dialogue table. With not too many days before the meeting between the Spanish and Catalan governments in the middle of September to address the political conflict, Junts has called on ERC to reaffirm the unity of the pro-independence forces and use their numerical muscle in the Spanish Congress to pressure the minority PSOE-Podemos government.

"We need the unity of the pro-independence forces, to reaffirm ourselves over the issues that we will bring to the negotiation," asserted the spokesperson for Junts, Elsa Artadi, who reiterated that the consensus of a majority of Catalan society revolves around the right to self-determination and an amnesty for those pursued by legal or police action against the independence movement.

Artadi, who warned once more that the meeting should be used to talk about the political conflict and not about competencies or El Prat airport, called for a repeat of the exercise carried out by then-president Quim Torra in January 2020, when he convened a meeting of civil groups and parties before the first meeting of the table, held in Madrid.

All the pressure on Sánchez

Junts also called on ERC to avoid rhetorical rivalry and mutual suspicion, and instead, to keep all the pressure on the PSOE-Podemos government, "from a position of unity and from a conviction of the positioning and strength that the pro-independence forces have for stability in Madrid and for the continuity of the government of Pedro Sánchez". If both parties were to withhold the 21 votes they have in the Spanish Congress, the Sánchez government would have no majority.

At the press conference after the first post-summer meeting of the Junts executive, Artadi called on the ERC to use "all the possible force" that the parties of Catalan independence have in Madrid, and urged the Republicans to take advantage of everything from the passing of the Spanish budget to “any crack that might emerge” to apply this unitary pressure from the pro-independence forces on Spanish politics. 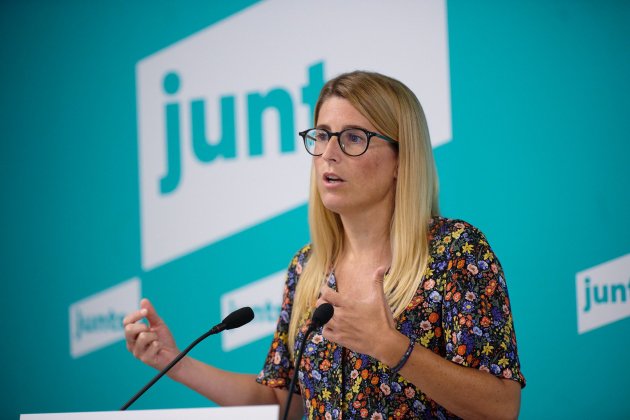 Junts criticises that neither the PSOE nor Podemos have made any proposal, and have limited themselves to commenting that they can only address matters within the limits of the Spanish constitution, which represents a restrictive reading of the talks and an adandonment of the concept of "legal security" which became part of the dialogue concept in the Pedralbes statement of 2019.

"For us it is not only important for Pedro Sánchez to attend - which is important - but above all, what interests us beyond the people who take part is what the political agenda and the issues to be addressed will be," she warned.

In this regard, she expressed concern that "the issues on which there is consensus in most of Catalan society - the right to self-determination, and an amnesty for all those politically persecuted - are precisely the issues that both PSOE and Podemos insist on vetoing."

Who sits at the table?

Although Junts initially raised the possibility of not limiting the members of the dialogue table to people who are part of the government, this Monday it admitted that, although it is not yet decided, "everything points to it ending up being a government-to-government meeting".

In addition, whereas before the summer, Junts opened the door to perhaps not allowing the full two-year margin it had granted the dialogue table to run out, today Artadi avoided talking about such deadlines, warning that they are not "big fans", and that the progress of these talks must be evaluated continuously and every step taken communicated to the public.

The statements by Salvador Illa

Artadi also referred to the controversial statements made at the weekend by Catalan Socialist (PSC) parliamentary leader, Salvador Illa, in which he affirmed that the last 10 years were "the worst of the last 300 years of Catalonia's history". She called for him to rectify his words, saying that they were "unfortunate and indecent [coming from] any democrat."

The Junts spokesperson also criticized the attitude of the left-wing Comuns in relation to the expansion of Barcelona's El Prat airport and the party's request for a dedicated parliamentary debate on the matter, and reproached their double standard on the airport, since their party are members of the Spanish government which is proposing the extension, and also in power in the Barcelona city council which opposes it. “When it comes to doing work they have decided that they will not take part, when this is a fundamental matter for the economy and sustainability in our country,” she warned.

In the main image, Elsa Artadi of Junts, during the press conference after the meeting of the party executive / Júlio Díaz