Draghi: Operation against Puigdemont was "carried out by police and judges"

Italian prime minister Mario Draghi has denied any involvement of "governments and politics" in last week's arrest of exiled Catalan president Carles Puigdemont in Sardinia and has said it was "essentially an operation carried out by police and judges".

During a press conference held at his government's headquarters in Rome after a cabinet meeting, the Italian leader asserted that the officers who arrested the MEP Puigdemont at L'Alguer airport acted in line with the mandate of an international arrest warrant issued by the Spanish Supreme Court, in reference to the warrant issued by investigating judge Pablo Llarena. "There was no involvement from the Italian government," he clarified.

Subsequently - continued the Italian PM - the judge decided to "suspend" the arrest after learning of the president's relationship with the European Parliament and the case which is currently open in the General Court of the European Union. A decision that represented a strong setback for the Spanish judge, who has already seen his European Arrest Warrants for the exiled Catalan leaders fail in Belgium, Germany, Scotland and, now, in Italy.

As well, prime minister Draghi denied having maintained any contact with the Spanish government Pedro Sánchez or, at least, any that he is aware of.

Sánchez's fear for his annual budget

Meanwhile, the messages coming from the executive in Madrid on the same question have been mostly expressed as statements expressing respect for the action of the courts. The main objective pursued by the Spanish government in recent days has been to try to disassociate what has happened from the talks on the Spanish government budget as well the negotiating table between the Spanish state and the Catalan government. They are aware that the Puigdemont episode threatens to raise an old element which could complicate matters: the situations of the exiled Catalan leaders which were not resolved by the partial pardons in June.

In fact, the issue of Carles Puigdemont's arrest today entered the Congress of Deputies in Madrid. The exiled Catalan president's party, Junts, put a question on the subject to Pedro Sánchez, who responded with a counterattack. Junts asked the prime minister to explain the role of the Spanish state in the MEP's arrest in L'Alguer, but Sánchez avoided answering and instead accused the pro-independence party of conspiranoia - that is, of falling for paranoid conspiracy theories. "We cannot negotiate anything with you," responded the MPS of the Catalan pro-independence party to the Spanish PM."

The arrest of Puigdemont

Puigdemont was arrested on Thursday at the airport in the city of L'Alguer and transferred to Bancali prison in the city of Sassari, buut was then able to leave on Friday, when the Court of Appeal ruled that no custody or bail measures would be imposed on him.

Puigdemont has stated that he will return to the island on October 4th to appear in person at the hearing which will study whether the conditions for his handover to Spain have been met, although Italian sources close to the case have asserted that if he were not physically present in Italian territory, the court would rule that "it is not appropriate to proceed" and would end the judicial proceedings. 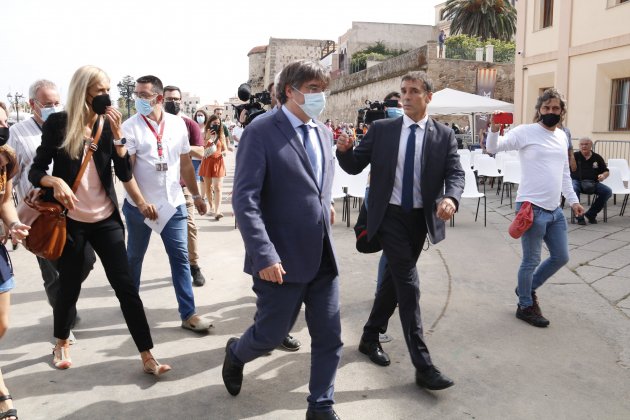 The president had traveled from Brussels to the island of Sardinia to take part in an Catalan folklore event organized by Adifolk, a group which aims to promote Catalan culture. On Monday, he returned to Brussels to continue with his duties as an MEP.