The issue of Carles Puigdemont's arrest in Sardinia last week has today entered the Congress of Deputies in Madrid. As might have been expected in the circumstances, the exiled Catalan president's party, Junts, put a question on the subject to the Spanish PM Pedro Sánchez, who used it as an opportunity to counterattack. And the Spanish right took advantage of it similarly. Junts asked the prime minister to explain the role of the Spanish state in the MEP's arrest in L'Alguer, but Sánchez avoided answering and instead accused the pro-independence party of conspiranoia - that is, of falling for paranoid conspiracy theories. In this scenario, Junts did not hesitate to blow up the few bridges that remain in their relationship with the Spanish leader: "We cannot negotiate anything with you."

The spokesperson for the Catalan party, Míriam Nogueras, had put the question: "Are you aware of the actions that are taken by all your departments at international level?" Pedro Sánchez's reply was brief: "Yes, madame speaker." But the Junts leader was not satisfied and sent a warning: "The judicial and police institutions that champion fascism are making a move. They are the ones deciding what happens and how." Quoting the description that "journalists in Italy and Spain" have made of the incident she said: "What we have seen is a complete balls-up." "And what is the 'most progressive government in history' doing in the face of this judicial coup d'état? It is taking advantage of it." Nogueras concluded by denouncing the "fictitious dialogue" and the "deceptions and cowardice" of the Spanish government, which are "not the solution to the repression, pillage and bullying of the people of Catalonia." 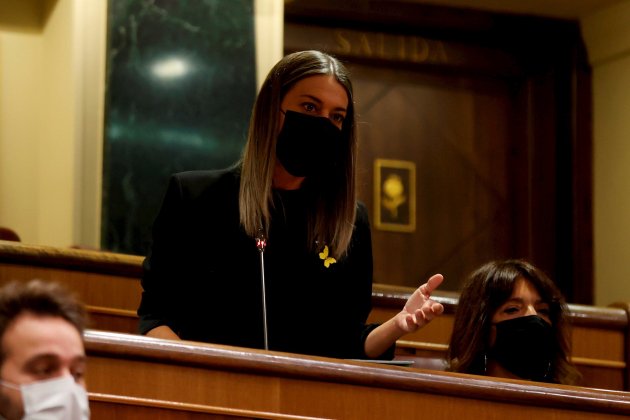 Pedro Sánchez's response? To accuse her of being paranoid, of falling for conspiracy theories. He used the example of an NBA star who "says he doesn't want to be vaccinated because there's a conspiracy to vaccinate blacks and connect them to a computer that has a satanic plan." And he added: "Honestly, with all due respect, you yourself do not believe what you are saying in the Spanish houses of parliament." The PM retorted that "Spain is a democratic country", that "the international rankings say so". And he fiercely clung to the dialogue table, assuring that it is backed by "the 80% of Catalans who want an agreement and not unilateralism".

And Noqueras was not the only party spokesperson who played the Puigdemont card against Sánchez. Pablo Casado (PP) and Inés Arrimadas (Cs) also did so. The leader of the Popular Party, leader of the opposition, urged the prime minister to answer if "he will keep his word and bring Puigdemont to Spain". Not only that, but he called on him to "get up from the dialogue table" and to launch "an international campaign to respect Spanish justice in all countries". A campaign that would involve "pressuring" Italian justice. And Casado added: "If you are not willing to defend Spain against criminals and the economic crisis, go ahead and let us do it."

Once again, the Spanish PM refused to answer the question head on and instead focused on attacking the PP. "Spaniards, whether right-wing or left-wing, from the north or the south, are heartily sick of the bickering, the insults and shouting," Pedro Sánchez replied. And he returned to the line he has used frequently in recent weeks and months: “We would like the PP and you yourself to help your country for once. Comply with the Constitution and democratic legality. Accept that you have been defeated at the polls."