Hasél: "The Spanish government breaks its promises, the 'Gag Law' has been extended" 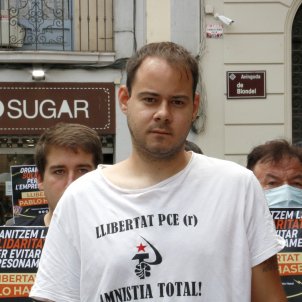 Catalan rapper Pablo Hasél remains convinced that there will be no new development that could change his mind about the current Spanish government and the powers of the state. In an interview this morning on the Ser Catalunya radio programme Aquí Cuní, he stated that if the Pedro Sánchez government is now putting a law on the table that will stop people like him from being imprisoned, they do so because "they are nervous". And he recalled that more than 60 mobilizations have been organized to protest against his jailing, as well as other campaigns such as the manifesto signed by over 200 artists and professionals in the world of culture including Joan Manuel Serrat, Javier Bardem and Pedro Almodóvar.

In fact, Hasél expects the police to arrest him this Friday for a court ruling that confirms his imprisonment for writing a letter against Spain's former king Juan Carlos I, which is considered a hate crime. Ahead of this, he asserts, "[the government] has to say things to play to the gallery, they are false and empty promises."

And he gives examples to support his premise: "The same thing happened with the 'Gag Law'," - referring to Spain's 2015 Law on Public Security, heavily criticised for curtailing fundamental rights - "they said they would repeal it and the current PSOE and Podemos have ended up expanding it into the digital realm."

Manifesto signed by over 200 artists complaining that the Spanish state has "become a world leader" in persecuting artists and demanding Pablo Hasél's continued liberty.

A final plot twist that would prevent Hasél from entering prison could occur but, if it does, he believes it would only come about for one reason: “If they end up overturning my sentence it will be because of the pressure of solidarity, and not because of this government which in any case has not yet stated or explained what it will do to prevent my imprisonment." The rapper from Lleida also explained that the government of Pedro Sánchez informed his defence lawyer that they wanted to amend the law but "that was a year ago".

Either way, the clock is ticking, and with only a few days until the deadline becoming effective, his arrest seems inevitable. Hasél is also very critical of Podemos because the left-wing party does not practice what its preaches: "I don't consider, like Pablo Iglesias does, that Spain is not a full democracy - it's not a democracy fullstop. As for freedom of expression or of assembly, they, from their position in power, have violated it on several occasions."

Doesn’t think he can avoid jail

He also denounces that some protests called to keep him at liberty have been subject to coertion from the police. He mentions the last one in Madrid, where police actions included "going to the Metro entrances to intimidate people, asking them to show ID, closing off the accesses, and all in a strategy to cover up a supposed democratic state."

Hasel is clear: "I think I'll end up imprisoned, I've been mentally preparing myself for years but until you get to that moment, you don't really become aware."

Meanwhile, among the initiatives in support of Pablo Hasél, was the painting of a mural in downtown Barcelona which depicted former king Juan Carlos and included phrases such as 'Freedom Pablo Hasél'. As denounced in a tweet, the Barcelona city council painted over the mural less than a day after it was completed. Barcelona mayor Ada Colau later claimed the removal of the mural was an "error" and it "shouldn't have been erased".