Gestures and messages in first Aragonès-Sánchez face-to-face: "A new us"

A cloud of camera-people, photographers and journalists were waiting at the headquarters of one of the anchor stones of the Catalan establishment, the employers' association Foment del Treball, to capture the political photograph of the day. The first official greeting exchanged between Spanish prime minister Pedro Sánchez and Catalan president Pere Aragonès since the latter came to power as head of a new government last month. The two coincided at the event that the association organized in honour of the publisher and businessman Javier Godó, count of Godó. "I hope this is the beginning of the solution," said Foment leader, Josep Sánchez Llibre in his presentation speech. The closing addresses were by the two leaders to whom he was referring. Aragonès demanded "proposals" from the Spanish government and Sánchez called on the ERC politician to "look for a new us": 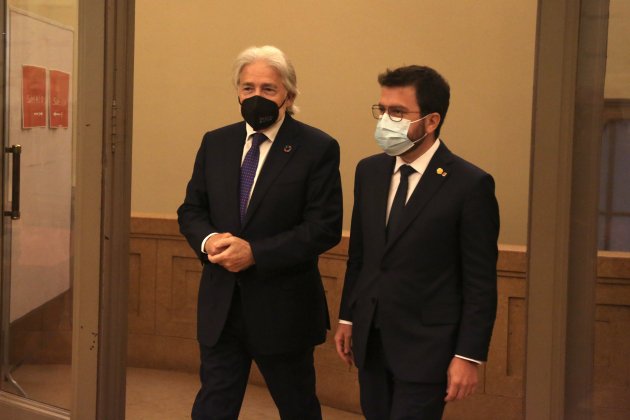 The two leaders had already held a long telephone conversation last Friday to lay the foundations for the resumption of relations between the governments of Catalonia and Spain, and thus today's contact was more of a formality. "They didn't talk for more than five minutes," according to sources who were present. It was in private, not at a photocall, and accompanied by the VIPs who were invited to the event. In line with Covid protocol, they greeted each other by touching fists. A gesture that they later repeated in public, so that the cameras could capture it.

Before the end of June, Aragonès is to travel to the Moncloa palace in Madrid to officially meet the Spanish PM. Today both had the opportunity to exchange messages during their speeches at the Fomento occasion.

The first to do so was Aragonès, who took the opportunity to defend the need to "overcome immobility and blockade and move forward again", pushing for a "stage of political normalization". In this regard, he criticized that "it is not normal that there are prisoners and exiles​ and that Catalonia cannot decide its future". From his point of view it is essential to "listen to and respect all proposals", despite "differing in the analyzes" and "starting from distant positions". Aragonès also gave a wink to Sánchez, by acknowledging that "positive steps have been taken", because "never before has the will to resolve the conflict been confronted". "It's time to get back on the path of dialogue. It will be extraordinarily difficult, but it is an obligation."

Immediately afterwards, Pedro Sánchez took the floor and recovered his two favourite concepts: "concord" and "reencounter", which was the title of the document he presented to Quim Torra more than a year ago as a proposal for a solution to the conflict. In his speech, he reiterated that "Catalonia is essential" for the future of Spain and called to "leave behind the sterile dialectic of one side and another side." "Let's together look for a new us," said the Socialist leader, calling for the abandonment of the spirit of "revenge" and prioritizing "pragmatism, honesty and common sense."

The Spanish PM used one of Pere Aragonès's recurring words, "courage". Courage to "leave behind a scenario of crisis and conflict, of confrontation that so many years later has only brought pain, poverty and stagnation." "The maximalist positions," he warned, "are not those that will allow the solution to be found, something that "will only be achieved", he said, "with arguments, reasons, and motives." "We can’t fail,” he concluded.

Foment president Sánchez Llibre, hosting the meeting, took heart from the response to today's event, which brought together the mainstream of Catalan politics and civil society. Not just the leaders Aragonès and Sánchez, but also the president of Barcelona provincial body the Diputació, ​​Núria Marín, the first deputy mayor of Barcelona city council, Jaume Collboni, the Catalan leader of the opposition, Salvador Illa, representatives from the CCOO and UGT unions and a large representation of the Catalan business community, in addition to the former editors of La Vanguardia, Godó's newspaper.

"This is a very powerful message of political normalcy and tranquility," said Sánchez Llibre, referring to the presence of the two political heads. He then made a request to them. "Entrepreneurs need political stability, legal certainty and economic stability. It is very necessary for political normalcy between governments to return." In the front row, the two leaders listened to the homework they had been assigned, which ended with a demand for dialogue. "Don't tire of it, because Catalonia and Spain need it."

The age of the thaw

Although at certain times it has been strained to the limit, the thread connecting Pere Aragonès and Pedro Sánchez has never been broken. Now that the ERC leader holds the presidency of the Catalan government, both have set a course for the resumption of contact between the palace of the Generalitat and that of the Moncloa. The breaking of ice to begin a new phase.

They gave the impulse to this on Friday with a forty-minute phone call that both sides defined as “fluid and productive”, in which they agreed to make efforts together in the fight against the pandemic and the crises arising from it. At the same time, they committed themselves to "move towards overcoming common challenges through dialogue."

The next step will be a face-to-face meeting between Aragonès and Sánchez that will take place at the Moncloa palace this month. The appointment will be the starting point for the resurrection of the dialogue table, which has been frozen for fifteen months.

In the main image, Aragonès and Sánchez. / M. Giralt

Editorial Will towards a new phase José Antich