A Barcelona court has sentenced a Catalan independence supporter to five years in prison for injuring a riot police officer on the wrist during a counter-demonstration to the rally called by the right-wing Jusapol police union on September 29th, 2018.

This was announced by the convicted activist Marcel Vivet himself on his Twitter account: "They have just sentenced me to 5 years in prison for having demonstrated against fascism and for the independence of my country. They will never stop me. I will never bow to the repression", he wrote. 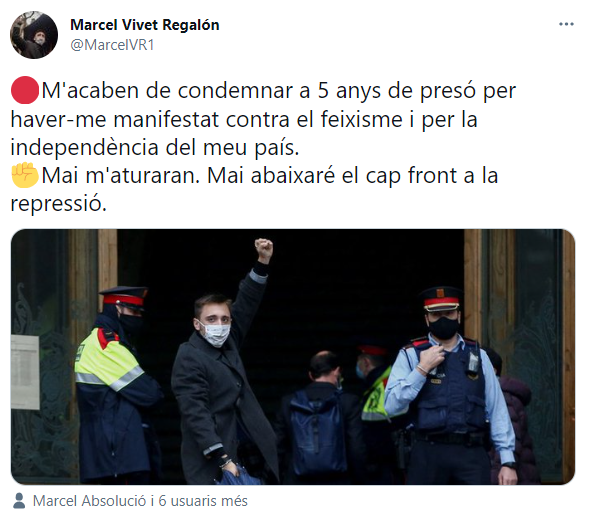 The announcement of the sentence led MP Dolors Sabater of the CUP party to call for an extraordinary meeting of the Parliamentary Parties Committee after this Wednesday's session of parliament, to issue a statement of support for Marcel Vivet.

During this afternoon's parliamentary session, Sabater called for the special committee meeting to be held, asserting that it has the support of most groups in the chamber, because they consider that Vivet has been "unjustly convicted for defending the rights of the Catalan people". She asked the other parties to support the request.

Assault on an officer

In the decision by Section 21 of the Barcelona Provincial Audience, Vivet was found guilty of an offence of public disorder - for which he was sentenced to two years' prison - together with another of an attack on a police officer - with a sentence of three years and one day — and a third offence for having carried out actions that "ripped the seams of the fundamental rights of assembly and demonstration."

The events for which he was tried took place on September 29th, 2018, when the defendant - who was part of Guanyem Badalona en Comú, the municipal political candidacy of the now-CUP deputy, Dolors Sabater - attended a counter-demonstration called by several pro-independence groups in protest at the rally by the police union Jusipol, intended partly as a homage to the police actions during the 2017 Catalan independence referendum, which was approaching its first anniversary. The counter-protest was billed as a version of the colourful Indian celebration Holi, in which coloured powders are thrown.

However, the court believes it proven that Vivet, who is also required to pay a fine of 600 euros, went to the front line of the counter-demonstration waving a flag of La Forja - a radical left organization linked to the CUP, and to which he belongs - "holding a pole two metres long and several centimetres thick".

At one point, members of the group he was with began throwing coloured powders and acrylic paint at police officers who were part of the police cordon "in order to make it difficult for them to see."

With the aim of "undermining their physical integrity", the protesters also threw "jars, bottles and other blunt objects despite being warned over loudspeakers to change their attitude". At that time, says the court sentence, Vivet made use of "the protection and feeling of impunity offered by the rest of the group" to hit a Mossos d'Esquadra police officer on his arm with the flagpole, causing him a "contusion with swelling" in his forearm and wrist as a result of which he was off work for 24 days. The court has ruled the Vivet must pay the officer 1,512 euros in compensation.

According to the Court, "the action of Mr Vivet and many of the people who accompanied him ripped the seams of the fundamental rights of assembly and demonstration, which in no way allow actions such as those described in the court's account to be committed".

The chamber also considers valid the statements of the police officers who testified at the trial, which was held last February, claiming that the demonstration in which the defendant participated "was marked by verbal and material violence" with "insults and threats", in contrast with the defendant's account which, the judges remark, "does not coincide at all with the real situation inferred from the evidence given".

Vivet argued in court that the demonstration led by the Jusapol police union "defended and justified the police violence" of the 1st October 2017 referendum "in an obscure atmosphere of violence, fanaticism and absolute tension, which contrasted with what was experienced in the counter-demonstration in which he participated, dominated by an absolutely peaceful mood, where colours, dances and songs were the protagonists".

Instead, for the Court, "the projection of acrylic paint and coloured powders was not accidental, but more typical of urban guerrilla techniques" since it achieved the "triple purpose" of hindering the vision of the officers, obstructing their breathing and leaving them with faces uncovered once the visor was removed, as the Mossos d'Esquadra police stated.

Vivet's case sparked controversy because the Catalan government decided to retain the charges against Vivet despite the fact that in November the then-interior minister, Miquel Sàmper, announced that he was finalizing an agreement for the Catalan administration to stop prosecution for attacks on police officers against those arrrested in violent demonstrations. This promise has not been kept.

In fact, the decision of the executive to force the suspension of the trial, initially scheduled for last December and postponed until after the Catalan elections of 14th February, generated controversy, as the defence interpreted it as a "manoeuvre" to avoid "compromising the Junts and ERC government just before elections, which in the end, have led to a new pro-independence government, this time led by ERC.

1st October, one year on Independence movement holds its ground to unionist provocation in Barcelona