Independence movement holds its ground to unionist provocation in Barcelona 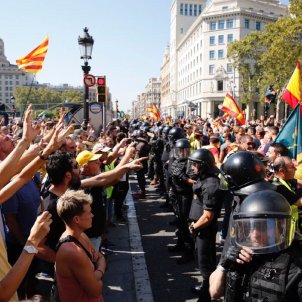 The independence movement stood firm in the face of the demonstration which police union Jusapol had called this Saturday in Barcelona's Via Laietana to pay homage to the Spanish police forces' actions against last year's Catalan independence referendum, almost exactly a year ago, on 1st October. More than 6,000 independence supporters filled the city's Plaça Sant Jaume and the streets of central Barcelona to prevent the Spanish police officers from reaching the square occupied by the seat of the Catalan government, the Generalitat palace. The turnout of Spanish police officers on the march, around 3,000 according to Barcelona city police, was far short of the figure of 10,000 marchers expected. 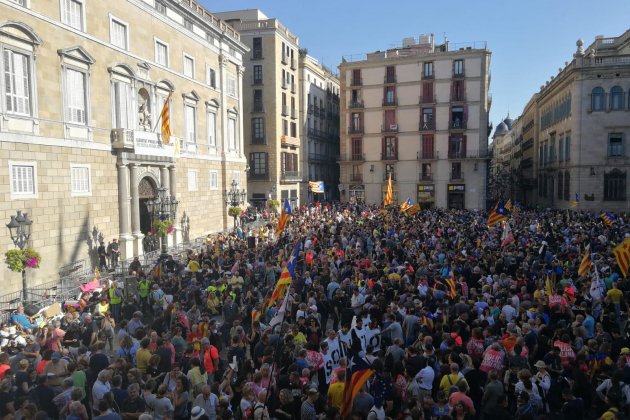 Before the Jusapol rally began to move down Via Laietana, hundreds of independence supporters led by the Committees for the Defence of the Republic (CDRs) and the CUP-alligned group Arran moved onto Via Laietana with the goal of reaching the position of the Spanish police officers in front of the National Police station slightly further uptown, a move that forced the Catalan Mossos d'Esquadra police to set up a strong police cordon that prevented clashes between the two mobilizations. It was at this time that the first charges took place by the Catalan police against the independence supporters, to which they responded by throwing paint, which left some Mossos and their vehicles completely bathed in colour. Because of the charges, the CUP party as well as the CDRs have called yet again for the resignation of the Catalan interior minister Miquel Buch.

Ambulance services say medical attention was given to 10 people and the human rights defence centre IRIDIA reports that Mossos acted improperly in their charges, alleging that several people suffered blows to the head from the Catalan police. 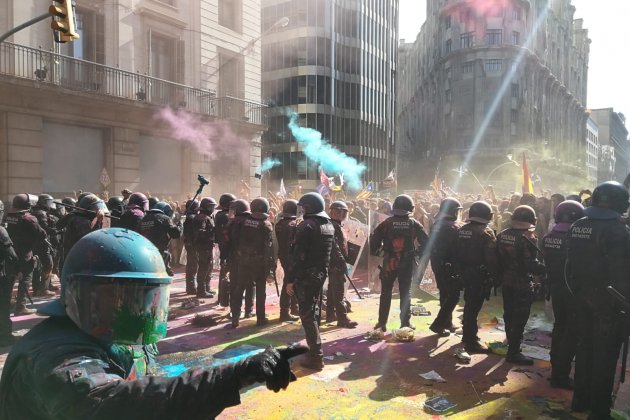 Protected by the cordon formed by the Mossos, the Jusapol demonstrators then headed up Via Laietana to Plaça Catalunya. There were Spanish police seen wearing Spartan-style iron masks, some carrying shields featuring the logos of their police bodies, the National Police and the Civil Guard; there were Spanish flags and those of some Spanish autonomous communities, and faces painted with the police bodies' colours. Among those present at the Jusapol rally was the lawyer leading the far-right party VOX's private accusation against the pro-independence leaders, Javier Ortega, who has come out in favour of "making the Mossos illegal because they have become a parapolice force"; María de los Llanos de Luna, Spanish government delegate in Catalonia under the now-defunct PP government, was also present, along with two Ciudadanos parliamentary deputies: Miguel Guitérrez and Jean Castel Sucarrat. Meanwhile, the odd anecdote took place among the pro-independence demonstrators still in Plaça Sant Jaume, where a woman tried - unsuccessfully - to provoke the crowd by giving fascist salutes.

Once in Plaça Catalonia, where the marching Spanish police eventually held their speeches, several Jusapol representatives spoke supporting the actions of the two Spanish forces during the referendum on 1st October 2017: "We defended the constitutional order". Coinciding with the end of the discourses, the independence supporters managed to break through the cordon formed by the Mossos at the accesses to Plaça Catalonia and encircled the square, which caused the occasional incident between them and the unionist supporters. Finally, via a security corridor formed by the Catalan police, the Jusapol demonstrators were able to leave the centre of Barcelona. 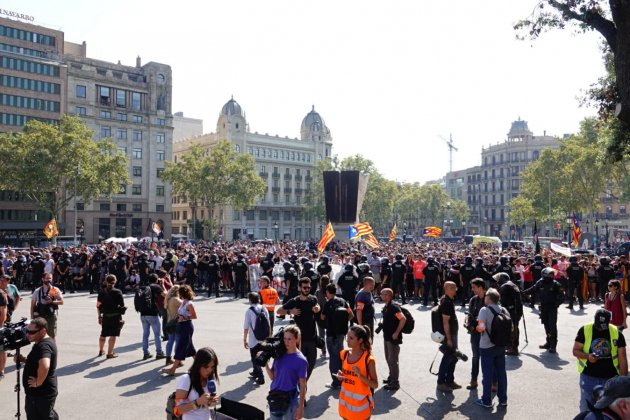 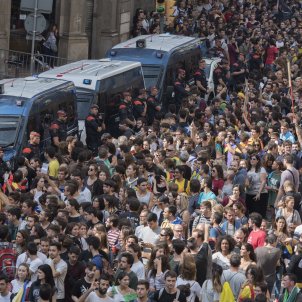 Editorial It's not independence supporters; it's the rot that's threatening an election José Antich