There is still margin for the Catalan government's budget to be passed by the three parties that made possible the investiture of president Pere Aragonès, but it won't be easy. The grassroots membership of the CUP have decided to reject the budget in its first parliamentary vote but the party has left the door open to withdraw this stand in the event that progress is made in negotiations before then. In short, the CUP wants to pressure the government until the last minute - its rejection of the budget, formally known as an "amendment to the entirety" of the bill, can be cancelled on Monday before 10:30am, the day of the first budget debate - to obtain new measures that the party is seeking. If the impasse is not broken, the government will need the Catalan Socialists (PSC) or the left-wing En Comú Podem to get the bill through, with both parties having offered to negotiate terms for their support in recent days.

A total of 509 party members took part in this weekend's open parliamentary assemblies and 462 voted, and according to deputy Eulàlia Reguant in a press conference, 63.42% of members chose to present the amendment to the entirety and 68.79% consider that it is necessary to continue negotiating with the government, while 28% opted to end the talks. On the other hand, the option of abstaining and thus enabling the budgets to be passed received the support of 33.98% of voters.

Asked to give her assessment of the turnout of CUP members in the vote, Reguant stated the more people who take part in a vote, the better, but attributed the "lack of participation" to political disaffection with the Catalan government. Compared to other CUP assemblies, the voting figures were certainly low: the famous tied 2015 vote by the CUP to decide on the investiture of Artur Mas had 1,515 votes for each option, meaning that more than 3,000 people took part.

The justification for the amendment to the entirety that the anti-capitalist party will present goes in three directions. The first is on the direction being taken by the Catalan executive "towards the normalization of the relationship with the Spanish state and the PSOE", which according to the anti-capitalists is reflected by the deployment of the programme of business association Foment and Spanish airport operator AENA, and also by "the stagnation and acceptance of the suspension of democracy and repression". The CUP membership asserts that the conditions for achieving self-determination are not being created.

The second aspect is the party's rejection of the proposed social policies and the sociovergent model - in reference to the policies of the Socialists and former centre-right party Convergència - since the CUP criticizes that in the accounts there is no evidence of a turn to the left "beyond words." In this regard Reguant regretted the "haste" that there had been to reach agreements on projects such as the expansion of Barcelona's El Prat airport and the candidacy for the Winter Olympics, which in her opinion contrasts with the paralysis regarding "core issues" in social matters which the anti-capitalists consider to be more urgent.

Finally, the CUP also rejects the "continuist" nature of the budget, as the party believes that the project presented by the Pere Aragonès government, despite incorporating some improvements, contains "clearly insufficient" numbers in terms of housing, health, and the change in the country's economic development model.

Define the next steps

This afternoon, the party's Parliamentary Open Coordinator was due to meet to define the next steps they would take and specify how the option to continue negotiating the budgets with the government would materialize: "We will keep working until the last moment to generate the conditions," said Reguant, assuring that they would try to resolve the impasse. 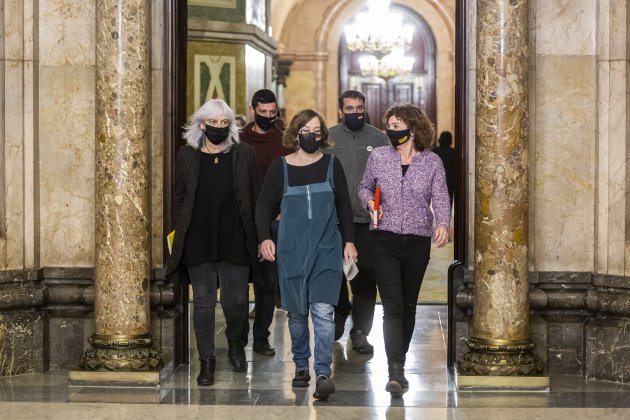 CUP deputies in a corridor of Parliament / Montse Giralt

All this comes after a weekend in which the membership of the CUP and the groups that support it met in a total of 15 assemblies to reflect and debate on the position to set on the budget and, therefore, also to mark the role that the organization should play based on this decision in a legislature that has been underway for less than a year.

In the vote, which took place throughout Monday by electronic means, two open scenarios were raised, set out in three questions. The first question was on whether to submit an amendment to the entirety, or to abstain so that the bill would proceeed through Parliament. The second question asked whether, if an amendment to the entirety was the chosen option, the party should continue negotiating or end its negotiation of the budget. The last question asked whether, in the case of abstention being the chosen option, the current accord on the budget was sufficient or insufficient for a definitive vote on the accounts.

The CUP and the Catalan government have been conducting intense negotiations for days, with some of the changes demanded by the anti-capitalist party being admitted, such as the commitment of the Executive not to allocate "a single public euro" to the Hard Rock casino and hotel project or the candidacy for the Winter Olympics until a public consultation on the matter has taken place.

Another hurdle that seems to have been overcome in the talks is the internalisation of the 061 emergency phone service, to which the government has committed itself, and the review of the 112 management model, including also a possible internalization; although government and CUP still disagree on the amount of money for Primary Care and how the additional funds in this area should be allocated.

Law and order policies have been another source of disagreement: the CUP demanded the withdrawal of private prosecutions by the Catalan government itself against protesters and although the executive has made some gestures, the CUP does not see them as enough. They also complain that the use of foam bullets by the Mossos police has not been suspended, when this stated in the investiture agreement.

As for housing investment, the anti-capitalist party demanded 1 billion euros of funding, which ERC had committed itself to in the investiture agreement, but the government's proposal does not reach this figure: only 750 million are allocated to this area. Nor has the Catalan executive accepted the CUP's proposals on taxation changes and redistribution of wealth.

The CUP grassroots do seem satisfied with the negotiations on education, in which "much progress has been made", and also celebrate the consideration of a pilot plan for a Universal Basic Income endowed with 4 million euros, and that there a commitment has been made to developing a public energy company.