Council of Europe admonishes Spain over jailing of artists and activists

A dressing-down has been given to Spain by the European continent's leading human rights institution, the Council of Europe. In a formal letter to the Spanish government, the Council's human rights commissioner Dunja Mijatovic has expressed her concern about the “growing number of criminal convictions, including custodial sentences” received by artists and activists in Spain over recent years. "Several provisions of the Spanish Criminal Code have a negative impact, including a chilling effect, on the exercise of freedom of expression, a right of crucial importance for a free and pluralistic public debate," the commissioner has said in a letter to the Spanish government, published this Monday.

The letter welcomes information "indicating" that reforms to "some aspects" are intended, but nevertheless details a series of problem areas in Spanish criminal law whose "comprehensive amendment" she believes would better protect the freedom of expression: insults to the crown, the glorification of terrorism, insults to religious feelings, hate speech and defamation. The Spanish justice minister, Juan Carlos Campo, has replied to the EC that the government does indeed intend to review these aspects, but that at present its proposals are still under consideration. 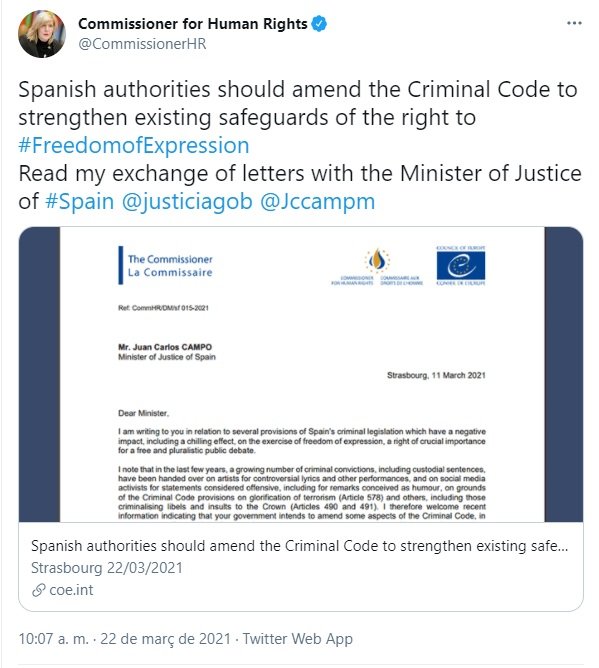 “Our goals are to define more clearly the type of behaviour that is sanctioned under these headings, and then, to match the penalties to the severity of the conduct,” Campo states in his letter of reply. The Spanish government announced its intention to make these changes following the controversy over the case of rapper Pablo Hasél. 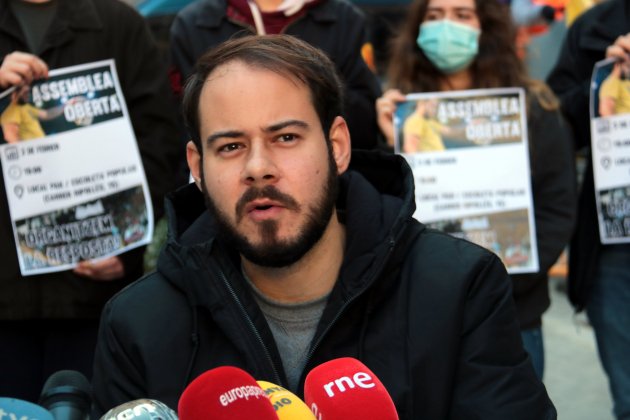 The letter from commissioner Mijatovic was sent to Pedro Sánchez's government on March 11th to warn of its "concerns" about the effect of some provisions of the Spanish Criminal Code "in light of international human rights standards" in the freedom of expression area.

The ambiguity of "glorification of terrorism"

Mijatovic says that the crime of glorifying terrorism in Spain is "problematic" because the definition is "ambiguous and imprecise", which has generated "divergent interpretations" in Spanish courts, some contrary to "international standards of freedom of expression".

"Some Spanish court decisions have failed to adequately determine whether the glorification of terrorism really entailed the risk of a real, concrete and imminent danger," laments the commissioner. She also criticizes the Spanish judges for interpreting the defendants' intention in an "abstract" way, without taking into account the "context" and against the jurisprudence of the European Court of Human Rights (ECHR).

“Anti-terrorism legislation should only apply to content or activities which directly involve the use or threat of violence with the intention to spread fear and provoke terror,” she remarks. In this regard, she warns that "misuse" of terrorism legislation can lead to "disproportionate" restrictions on freedom of expression, especially when punishing comments that "do not contain elements of apology of terrorism, but incite other forms of violence” or are “politically embarrassing”.

Insults to the crown

The Commissioner for Human Rights also views with concern the Spanish offence of insults to the royal family and calls on the Spanish government to reform it in line with European human rights standards. In particular, Mijatovic makes clear to Sánchez that the Spanish law reform must take into account the ECHR ruling on the burning of photographs of the "royal couple" in Girona (the case of Stern Taulats and Roura Capellera vs Spain) which established that there must be a wide margin of criticism of public representatives.

“The ECHR considered in particular that political criticism of public authorities and personalities, as provocative and radical as it may be, could not be considered as hate speech and incitement to violence,” Mijatovic recalls.

Apart from the reform of the crimes of glorification of terrorism and insults to the monarch, which are at the heart of the public debate in Spain, the Council of Europe also sees problems in the criminal treatment of hate speech, insults to religious feelings and defamation, and "invites" changes to Spanish law in these areas.

Mijatovic considers "excessively wide" the interpretation made by Spanish judges to the notion of hate speech and fears that it will affect freedom of expression in Spain. Therefore, she sees it as "crucial" to restrict this crime only to "xenophobia, anti-semitism and other forms of hatred based on intolerance that incite discrimination, hostility and violence."

In addition, the commissioner urges the Sánchez government to "decriminalize insults to religious feelings," as they may limit freedom of expression and "hinder pluralistic debate" in the state. In the same way, she called for defamation to be decriminalized because, as established by the Strasbourg court, "the mere fact that sanctions can be applied can have a chilling effect on freedom of expression".

Mijatovic sees all these reforms as necessary to "strengthen" freedom of expression in Spain and "facilitate" the work of Spanish courts in making decisions that are in line with Strasbourg jurisprudence. "It would also demonstrate the government's commitment to protecting freedom of expression," she says at the end of the letter.

Spanish justice minister Juan Carlos Campo admits in his reply that "the regulation of certain offences related to the freedom of expression continues to pose difficulty, not least because of the imprecision with which some forms of criminal conduct are defined." Thus, he assures the commissioner that in early February the Spanish government had already announced its intention to reform the crimes of glorification of terrorism, hate crime and insults to state institutions, "among others." 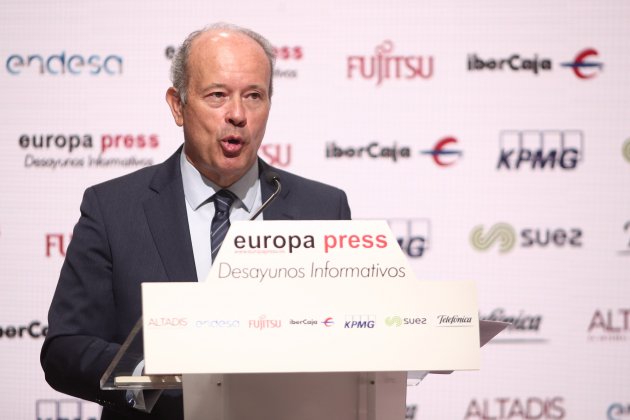 "Please accept the assurance that we share the concerns expressed in your letter and that the proposed reforms regarding the offences in question are intended to reinforce our protection of the legitimate exercise of freedom of expression," says Campos in the response sent on March 18th.

For his part, Catalan president in exile Carles Puigdemont has called on Spain to react immediately to this warning from the Council of Europe: "For years, the Spanish state has been eroding freedom of expression. This warning should have immediate consequences, which is what any advanced democracy would do." 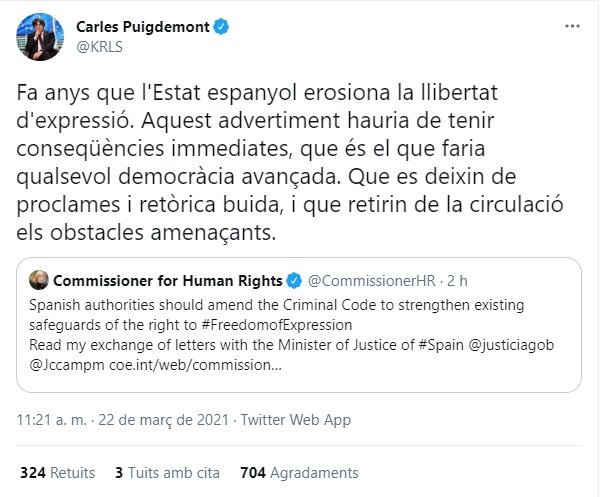 Puigdemont calls on Spain to “stop making empty proclamations and rhetoric" and "remove the threatening obstacles from circulation”.

Main photo: The exterior of the Council of Europe in Strasbourg / ACN