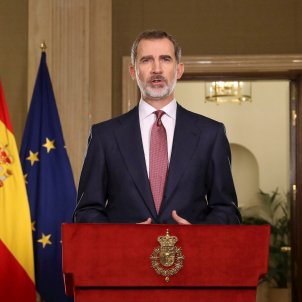 Spanish king Felipe VI's first television address on the coronavirus crisis failed to include even the most oblique reference to the corruption scandal which has set the royal house ablaze since it was learned that Swiss prosecutors are investigating a 100 million dollar bank account which belonged to Felipe's father, Juan Carlos I, and whose proceeds the current monarch and his daughter were to inherit. The monarch merely called for unity, urged citizens to "set an example" by being responsible and showing a sense of duty, and assured that the Spanish state would pass the test and emerge stronger at the end of the pandemic.

Felipe VI appeared on television after earlier this afternoon meeting with the Spanish prime minister Pedro Sánchez and the pandemic monotoring committee in the Zarzuela royal palace. It was his first comment on the issue since the coronavirus crisis broke out, but also his first appearance since, three days ago, he announced in a press statement the decision to strip his father of his publically-funded salary and renounce the legacy of the multimillion euro Swiss account.

However, the monarch remained completely silent on this whole episode, even though it has triggered the worst crisis in the institution he leads since his coronation in 2014. Instead, he decided to let the pandemic overshadow it.

He limited himself to adopting the line of unity, the flag which Pedro Sánchez's government is also waving, and to send a message of support to his subjects. "Now we must put aside our differences. We must unite around one goal: to overcome this grave situation. And we have to do it together; between all of us; with serenity and confidence, but also with determination and energy."

As Felipe VI's voice issued forth from television sets, the empty streets all over the Spanish state resounded with a cacophonous aural protest, as people banged pots on their balconies to demand that the emeritus king donate the millions from the Swiss account to the public health system to help overcome the pandemic.

This alternative was not mentioned in the speech, in which the fight against the virus was described as a "challenge" for the country, which at this point in its history is being tested "in a difficult, painful and sometimes extreme way", "testing the values ​​of a society and the very capacity of a state."

The monarch, standing before Spanish and European flags and behind a lectern featuring the royal shield, did talk about "setting an example" - however, he was referring to ordinary Spaniards, rather than their head of state. "I am sure that we will all set an example, once again, of responsibility, of a sense of duty, of civility and humanity, of dedication and effort and, above all, of solidarity - especially with the most vulnerable, so that no one feels alone or helpless," he predicted.

He assured the public that the entire state is committed to solving the coronavirus crisis and that the Spanish people can feel that they are protected; he thanked all the public services fighting the pandemic and, in particular, those responsible for the healthcare system - "Spain's advance guard and first line of defence", he said; and asked the population to adapt their daily habits to the directions given by the authorities.

Before finishing, however, he also wanted to convey a message of optimism. He assured that "this is a temporary crisis", "a parenthesis in our lives" and that "normality will be restored". This will be possible, he said, "because Spain is a great country, a great people that does not give in to difficulties. He affirmed that the virus would not win. "On the contrary. It will make us stronger as a society; a more committed, more supportive, more united society. A society ready to mobilize in the face of any adversity," he said.

The speech lasted seven minutes and ended with a "Keep your spirits up, and keep going."