With two and a half months having gone by since the Catalan election, new energy was needed to get the negotiation for the formation of a new pro-independence government back on the rails for the final stretch of its journey. Broadly speaking, that is why a summit was held this Tuesday afternoon at the Lledoners Penitentiary Centre, in the Bages county: to lubricate the accord. Although both sides tried to downplay the encounter, the expectation generated by the entry into the scene of Pere Aragonès and Oriol Junqueras to unblock the deal in a meeting at the highest level with Jordi Sànchez - who has been the leading Junts negotiator in the talks with ERC - showed the importance of an appointment that lasted almost four hours and ended with an optimistic joint statement. 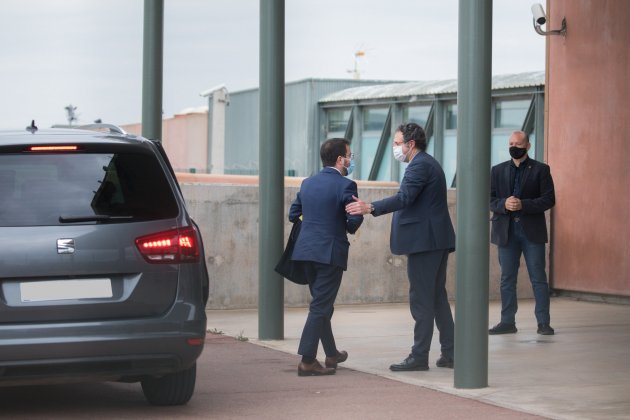 Aragonès on his arrival at the Bages prison. / Eva Parey

The image of the presidential candidate arriving at the prison to share his project for the government of Catalonia with the leading figures of ERC and Junts was graphic proof of the exceptionality in which Catalan politics has continued to be immersed since the imprisonment of the pro-independence leaders. Beyond the photo and the gestures, however, the visit to Lledoners helped Aragonès explain how he wants his government to be structured. It is the first time that talks on this point have been formally started - an area which in any negotiation is indicative of entry into the home straight.

Both parties offered a statement this evening in which they have assessed as "positive" a meeting which started shortly after 5pm and ended at almost nine. ERC and Junts also claim to have "set out that they will continue working to construct a pro-independence government led by Pere Aragonès, which responds to the electoral mandate of 52% of the vote." No time limits. Although ERC is pushing for it to be concluded before Saturday, sources consulted admit it may continue into May. They have until May 26th.

As ElNacional.cat previously reported, Aragonès, Junqueras and Josep Maria Jové​ took part in the conclave on behalf of ERC and Sànchez, Elsa Artadi and Josep Rius, on behalf of Junts. Thus, present at the meeting were the likely two highest-ranking members of the future government: Aragonès as future president and probable vice-president Artadi. In addition, the design sketched by the ERC leader provides for the creation of three new ministries - Equality and Feminisms, Climate Action and Universities and Knowledge - which would involve the merger or dissolution of other departments, to maintain the current cabinet size with 13 ministries.

Apart from the architecture of the executive, the meeting served to review other areas where the work is much more mature, such as the government programme. 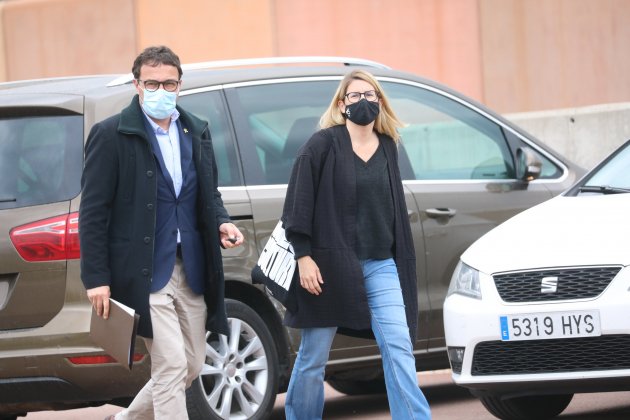 Artadi and Rius of Junts arriving at Lledoners. / Eva Parey

The CUP, kept up to date

For days, not only ERC, but also the CUP have been impatient about the failure to wrap up the agreement. Although discreet, the contacts between the two major parties of independence and the smaller third party have been maintained over the weeks and it has been possible to make progress, on all three sides, in the specifics of the review of the model of policing and public order.

CUP will maintain an open door to become part of the government, but they will not pass through it right at the outset. If the moment arrives, the incorporation of the far-left party into the executive would take place later, when the legislature is underway and the CUP can see clearly whether or not Aragonès is complying with the document which both parties signed to guarantee that the CUP's votes would be cast in favour of investing the new government.

Aware that any modification of the document agreed on may alter the support of the CUP, Pere Aragonès's party has been keeping the third party closely in touch with developments in the talks with Junts. If, finally, a full deal with Junts falls apart, the CUP guarantees that it will support a minority Republican government.

In the main image, Aragonese. Artadi, Rius and Jové say their goodbyes after leaving Lledoners on Tuesday evening. / Eva Parey