The secret agenda of the head of Catalonia's Mossos d'Esquadra police on a trip to Madrid in July, during which he visited the Zarzuela royal palace, the Supreme Court and the National Audience court - without knowledge of the political leadership of the Catalan interior ministry, has dynamited the few bridges of trust that remained between the police chief, Josep Lluís Trapero, and the Catalan ministerial team under Joan Ignasi Elena and the director general of police, Pere Ferrer.

The relationship between the interior ministry and the Mossos chief has never been good, but the revelation of these meetings has now increased the tension with the political leadership. Ministry sources confirm that the visits were not notified, although they believe they were held for operational reasons and were therefore justified. This, however, has not lessened the irritation of Elena and Ferrer, who believe they ought to have been warned.

As ElNacional.cat has learned, the July trip was the second such visit by Trapero and some of his closest senior colleagues to Madrid since he was re-appointed as head of the Catalan police body by minister Miquel Sàmper.

In May, he made a trip to the Spanish capital Madrid accompanied by his second in command, commissioner Miquel Esquius, and other commanders, including the heads of the force's investigation and information departments.

The Catalan interior ministry was informed of this visit, but the head of the Catalan police corps also held meetings outside the public agenda. At that time, it had just become official that commissioner Ferran López had left the Mossos and had joined FC Barcelona as head of security. Trapero needed to prove that he was still strong despite losing López, who was both a close colleague and a key connection with Madrid. The visit was thus used to present Esquius as his new strong man and reference point in the Spanish capital.

For the July visit which has now emerged, Trapero was also accompanied by Esquius, and the meetings at the Zarzuela, the Supreme Court, and National Audience were the second parts of the May encounters. Officially, neither the Catalan interior ministry, which knew nothing of them, nor the Mossos themselves, have revealed what issues were addressed.

Neither confidence, nor communication

This latest revelation now further sours the relationship between the current head of the police force and the interior ministry's leadership. The scheduling of secret, high-level  meetings by the police chief is a highly delicate matter and should always involve coordination with the Catalan minister and the government's director general of police, in order to avoid jeopardizing political or institutional initiatives. Not communicating plans for such meetings not only clearly reveals the lack of communication and trust between the Mossos head and the departmental leadership, but it also shows that Trapero either does not understand or does not accept his role as head of Catalonia's police force. 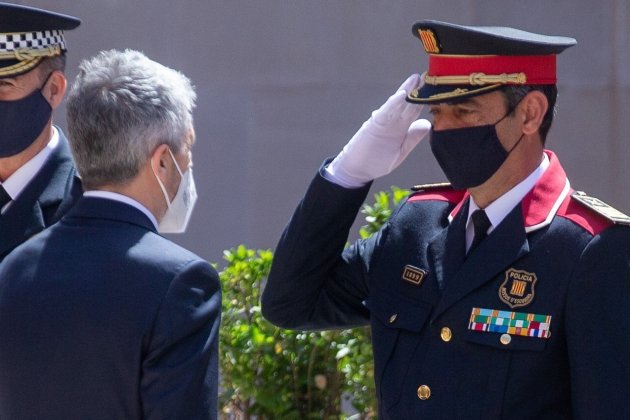 This is not the first time that Trapero has taken matters into his own hands and sought to launch initiatives that are not within his competence, such as when he organized a "council of experts" with his collaborators to reformulate the Mossos' approach to maintaining public order. He conceived a merger process of police units that the head of the Brimo riot squad had even gone so far as tell his squad members about. That reform process is now paused, awaiting a parliamentary commission, which will be where the Catalan police force's public order model will be debated politically.

A police chief on thin ice

These latest events confirm that chief Trapero is skating on thin ice, and the Catalan interior ministry is working to find a replacement.

In fact, the secret meetings are only the latest episode. Previously, the discomfort between both parties has been highlighted on many occasions: through other mistakes made by the Mossos chief - including ill-judged police charges in Gràcia during the Pablo Hàsel protests, and the salutes and photos with the Spanish king Felipe VI - as well as by decisions taken by the interior ministry - such as withdrawing Trapero's control over bodyguards of the Catalan president and government members.

The balancing act may continue for a few more weeks, but everything suggests that Trapero's days at the head of the Mossos are numbered. The second part of his leadership of the force will be shorter than the first, less prolific and with an ending - if confirmed - that is not externally forced.

That is to say, in 2017, Trapero was not dismissed by his Catalan political superiors, but by the Spanish minister of the interior, after the collapse of the independence process and the application of Article 155 of the Spanish Constitution, under which president Puigdemont, minister Forn and the whole Catalan government were also sacked.