Supporters of musician Pablo Hasél filled the streets of Catalonia for the fourth evening in succession to demand the release of the rapper who was imprisoned last Tuesday. This Friday night has seen protests, barricade burning, property destruction and incidents with police in Barcelona, Girona, Tarragona and Vilafranca del Penedès.

In Barcelona, the meeting point this Friday was the central Plaça Universitat, and 2,000 people turned up. Once there they sang songs and then headed to Plaça Urquinaona amid chants of "Urquinaona, let's do it again" in reference to the riots of October 19th, 2019, five days after the jailing of the pro-independence political prisoners.

From the plaça, the protesters descended Via Laietana to the Spanish National Police station, where they were met by an operation from the Catalan police, the Mossos d'Esquadra, who were protecting the building. Protesters threw glass bottles and firecrackers at the Catalan officers.

Another night of barricades

The police, however, were able to take control of the situation immediately and dispersed the protesters, who headed down Via Laietana in a seaward direction.

Along the way, some of those present set alight to boxes and papers, but without building barricades at this point.

Afterwards, the protesters began a cat and mouse pursuit with police vans in the lower part of Via Laietana, from which they escaped with several accelerations. Arriving further downtown at the Pla de Palau, the demonstrators built barricades with dozens of containers and set them on fire.

In this fourth night of protests, which took place around the Born neighbourhood, a violent group broke windows of at least four bank offices and removed traffic signs. At one of the bank offices, protesters went inside and one of them was heard to say, "It's over, we've looted it." This was the CaixaBank branch on Carrer Rec.

Some of the protesters then tried to set fire to that bank branch, but others prevented it. “People live there!” they said. Then, the group entered the Passeig del Born, where they mixed with dozens of people who were drinking in the street outside bars - since entry to the bars was closed due to Covid restrictions.

Also in El Born, in the area of Carrer Canvis Vells, there was property destruction and acts of vandalism against shops. In addition, a group of hooded men threw all kinds of objects at the Guardia Urbana police station on the Rambla, according to the Mossos d'Esquadra. Another of the shops looted was the branch of the Decathlon chain in Carrer Canuda. 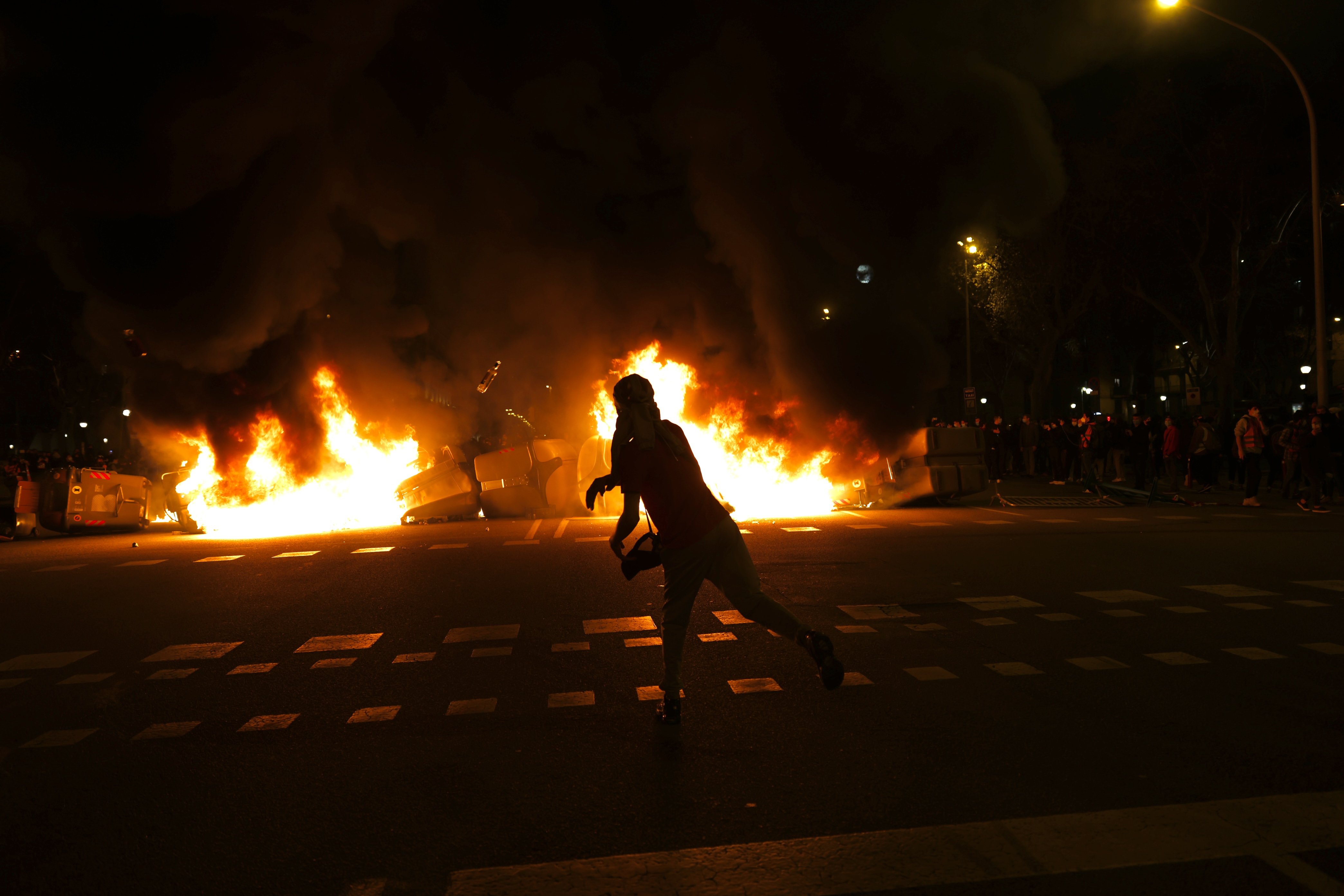 Around 10pm there were three confrontational hotspots between rioters and police: Plaça Catalunya, the end of La Rambla and Carrer del Carme, where barricades were set up. 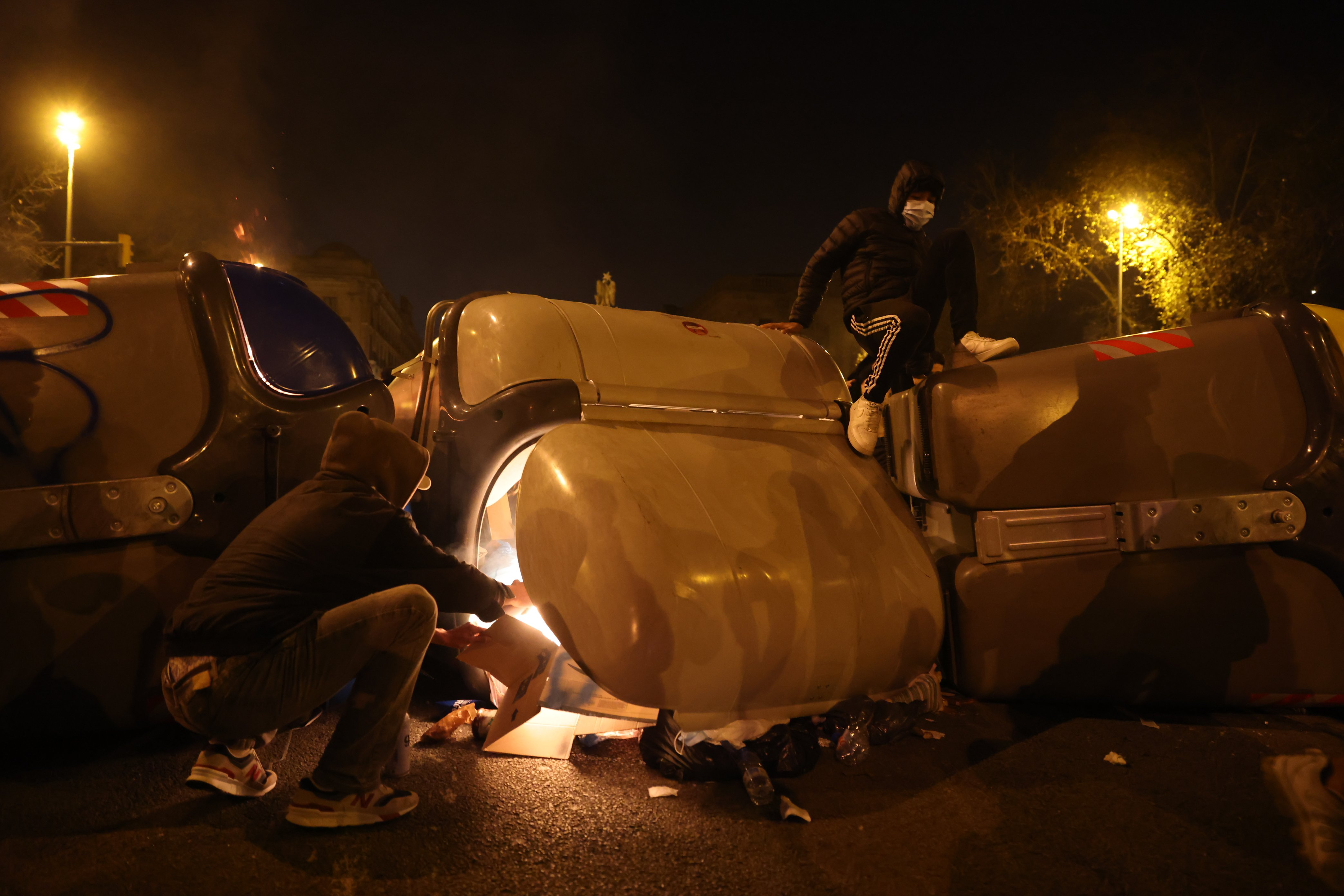 After the criticism that the police body has received, in this fourth night of protests there were few interventions by the Mossos d'Esquadra. There was a closing of ranks in the body in the face of criticism while at least one police union made fierce protests on social media.

Later in the evening, small groups of protesters remained in the vicinity of Plaça Catalunya and Rambla Catalunya, and Mossos passed by in vans to disperse them, as well as firing foam projectiles shots very selectively. Foam shots were also used further downtown, in Carrer Ferran.

"In Barcelona, groups of hooded men are throwing all types of objects at a police station on the Rambla," the Mossos d'Esquadra reported. In this same area there were clashes between officers of the Guardia Urbana  - the Barcelona municipal police - and a violent group of people, one of whom kicked an agent. The police responded by using their batons.

In the Rambla, another violent group used containers, planters and restaurant chairs to make barricades, thus destroying part of the outdoor seating of the restaurants on the pedestrian avenue.

Up till now, in Barcelona, ​​the Mossos d'Esquadra have arrested two people: one for disorderly behaviour, the second for an attack on an agent of authority.

Barcelona, ​​however, was not the only place where protest incidents took place in Catalonia. The Mossos d'Esquadra also reported that in the town of Vilafranca del Penedès, south-west of Barcelona, protesters threw paint, stones and fireworks at the police officers guarding the Mossos station.

"In Vilafranca del Penedès, violent groups have destroyed the perimeter security fences at the police station and also damaged a police vehicle, throwing paint and stones," said the Catalan police on Twitter.

In the city of Girona, there were incidents in at least two places, according to the Mossos d'Esquadra. Specifically, one location was near the La Copa sculpture where stones were thrown at the Catalan police while containers burned on Passeig Canalejas.

At these protests, police officers batoned the CUP deputy Dani Cornellà, who had to be taken to hospital. At last report, two people had been arrested in Girona for throwing stones in the La Copa area.

freedom of expression The arrest of Pablo Hasél Gemma Liñán