The Catalan government has reinstated Josep Lluís Trapero as head of the Mossos d'Esquadra, the Catalan police force. Trapero will thus once again hold the role of chief of the police force with the full competencies of the office.

Catalonia's interior minister, Miquel Sàmper, today informed chief Trapero of his reinstatement as head of the Mossos d’Esquadra. According to a statement from the department, the minister had "had a conversation with the chief, who was dismissed as head of the Mossos by the government of the Spanish state in October 2017, and has informed him of his decision."

Today's move follows the Catalan police chief's recent acquittal in a Spanish court on rebellion and sedition charges, accused of assisting the Catalan government in its pro-independence initiatives. The interior ministry statement explains that, after the court decision, the minister Sàmper "reiterated to the chief the will for him to return to the head of the Mossos d'Esquadra to reverse the effects of Article 155, but Trapero stated that he needed a few days to assess his current professional situation". Today, Josep Lluís Trapero informed the minister of "his firm will to take command of the corps again and Sàmper told him that he would make it effective immediately."

With the return of Trapero, Eduard Sallent leaves the post of chief commissioner of the Mossos. He was appointed in June 2019, when he replaced commissioner Miquel Esquius. Sàmper has had meetings with him and with the police director general, Pere Ferrer. The minister "expressed his personal gratitude for the work done" by Sallent in leading the Mossos d'Esquadra.

The minister Sàmper, accompanied by the secretary general of the interior ministry, Beth Abad, and the police director general, Pere Ferrer, held an initial working meeting with chief Trapero this afternoon. 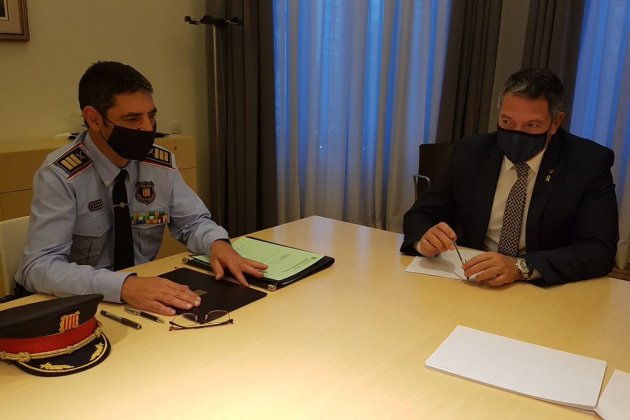 The minister and the Mossos chief have also agreed to hold a meeting tomorrow with the police body's senior command at the Mossos Central Complex in Sabadell.