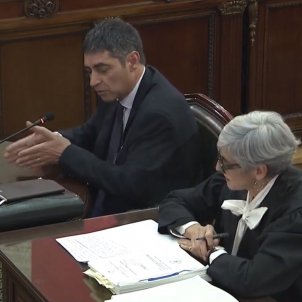 The impact of Mossos police chief Josep Lluís Trapero on the Spanish Supreme Court could not have been more spectacular if he had driven a police van into the courtroom hearing the Catalan independence trial. With surprising parsimony, the chief let the world know that Catalonia's Mossos d'Esquadra force had prepared a plan to arrest Catalan president Carles Puigdemont and members of his government, and that on September 27th, 2017, between 1.30 and 2pm, he had called the judicial authorities to put the Mossos police corps at their disposition in the event that they were to "order some type of action".

Trapero, who had already given this same explanation to Spain's National Audience court, made public these moves by the Mossos in response to questions from Xavier Melero, defence lawyer of his former boss, ex-interior minister of Catalonia, Joaquim Forn. When he spoke, the courtroom fell into absolute silence, while in parallel, the defence lawyers' questioning was opening up an immense chasm in the supposed framework of complicity between the Catalan government and the Mossos, foundation of much of the prosecution case.

But not only that. The police chief, as well as making clear that no judicial authority ordered any action to be taken in response to the Catalan independence declaration on October 27th (even though the Mossos had had a contingency plan ready for two days), also little by little revealed his differences with the Catalan government on the way the independence process was being conducted. He even talked about "a degree of irresponsibility" from the minister Forn.

However, the defences managed to keep hold of the reins of the cross-examination, by raising the very same legal point, article 708 of Spain's Criminal Justice Law, which is used by presiding judge Manuel Marchena every time he wants to swat a impertinent question as though it were an annoying fly. With this argument, and thanks to the ineffective performance of the Vox private prosecution, the other two prosecutions were unable to interrogate Trapero about any issue that had not previously been raised in the questioning from Vox, who had called the witness.

The repeated attempts by the public prosecutor, Javier Zaragoza, to ask about the meetings held by Puigdemont and Forn with the Mossos leadership just prior to the referendum, on 26th and 28th September 2017, were useless. Vox had not asked about these meetings and so the other prosecutions could not do so either. This was decided unanimously by the court after deliberating on the matter, taking advantage of the lunch break.

Quim Forn's lawyer had reserved questions about that meeting when the turn of the defence arrived. "I, however, am able to ask, because you are my witness," he argued.

What lawyer Xavier Melero did not anticipate, though, was that, after he had neutralized the prosecution, Marchena himself would return to that same article 708 just before releasing the witness, recalling that paragraph two of the article allows the presiding judge to carry out further questioning if any aspect has not been made sufficiently clear during the declaration.

The defence lawyers shifted in their chairs and the police chief's attorney, Olga Tubau, ran her hands through her grey hair when the judge began to ask Trapero about the content of those meetings of the Mossos leadership with the Catalan president, vice president and interior minister - with the speaker of the Catalan parliament having also been invited, but not in the end attending. "What concern motivated you to call or express the desire for this meeting to take place?" Marchena asked.

And at that point the Mossos chief cut loose into a cascade of criticisms and points of difference with the strategy of the Catalan government, which was not stopping the political process despite the legal requirements. "We called on them to comply with legality and told them that we would comply, that they shouldn't get the wrong idea about us," he stated, also explaining that they wanted the presence of Carme Forcadell, who did not attend, because the intention was to make it clear that "the Mossos corps was not going to violate legality and the Constitution" and that they did not go along with the independence project.

Trapero's words issued forth into the courtroom like bursts of fire bouncing off the walls. The Mossos chief was finally able to explain in public and to the court the tension he had undergone with the Catalan executive as a result of a situation that, as he himself explained, was placing his team in positions where they were running "personal risks" with regard to the justice system.

Without anyone interrupting him, and to the surprise of all present, who a moment earlier had thought they'd heard all that would be said, Trapero had expressed the concerns that were worrying him and the heads of the Mossos. Even the court clerk, who every day accompanies the witnesses as they arrive and leave, and was already on her feet to show Trapero to the door, stopped still where she was standing in order to avoiding cutting off this effusion.

"And I don't think I've left anything out," he finished.

After a moment of doubt, and in the face of such a festival of explanations, Marchena asked the defences if they wanted to put any further questions after hearing the new testimony. Melero once again asked what he had already asked: "After this statement, did the members of the Catalan government make any recrimination, criticism or instruction against it?". "Do the work that you have to do. That was the response," Trapero said. And with that final defence broadside against the prosecution framework, it ended. 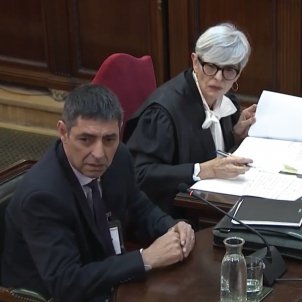 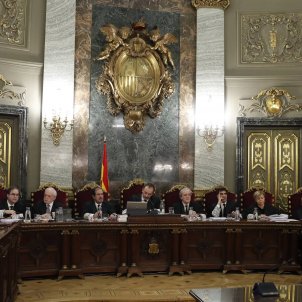