It's been many months since Catalan independence has held such a large march. This Saturday, five days after the start of the Supreme Court trial in Madrid, and sixteen months to the day since two of those on trial, civil leaders Jordi Sànchez and Jordi Cuixart, were imprisoned, the independence movement has done it again. The organization speaks of half a million people; city police reduce that to 200,000. In any case, around a mile and a half of Barcelona's Gran Via, from Plaça Espanya to Plaça Universitat, turned into "a human wall" - an ironic reference that was almost inevitable, following this week's remarkable courtroom claim by the prosecution that "human walls" had thrown themselves against the security forces on the referendum day in 2017. 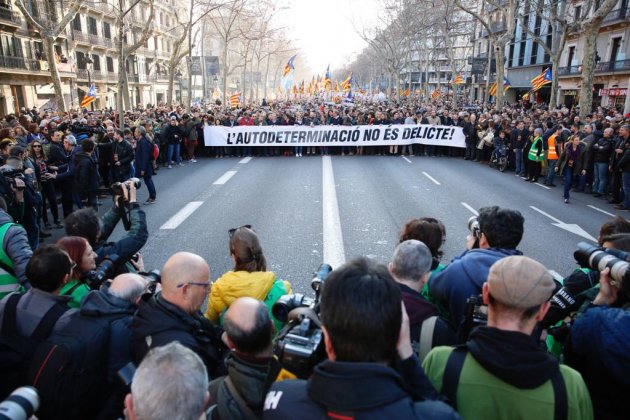 It was the first major response by the public to the events in the Supreme Court. The Spanish state's repression has left its mark, for sure. You only have to note that today the protest slogan was not calling directly for independence, but rather, asserting that self-determination is not a crime. However, everything depends on the way you look at it, and there is clearly a positive reading for the movement in today's march: that nothing unites more than having a common enemy. Today, political parties, civil organizations, trade unions, social and cultural groups and hundreds of thousands of protesters were clear that their adversary is the Spanish state.

The march began at five in the afternoon, with the Catalan government, members of parliament and civil society leaders at the head. Catalan president Torra and parliamentary speaker Torrent, ministers, deputies from the three pro-independence political groups JxCat, ERC, and the CUP along with the left-wing Commons, relatives of those imprisoned, on trial and in exile, and a long etcetera that stretched away towards the horizon. An hour later, at 6pm, the head of the march had reached the stage, located in Plaça Universitat, and the speeches began. 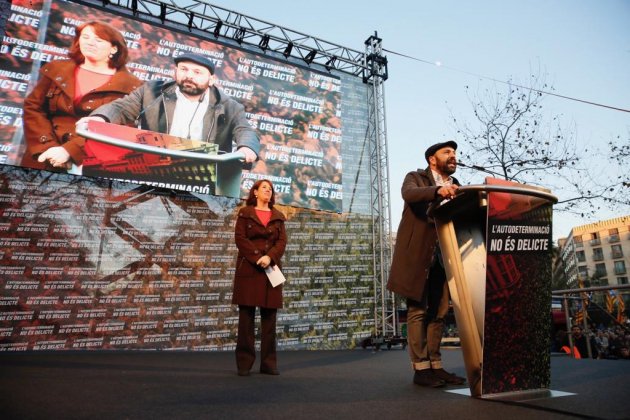 The leaders of the major pro-independence civil groups Òmnium Cultural and Catalan National Assembly (ANC) were first to speak. Marcel Mauri of Òmnium thanked the public for having turned the Gran Via into a wall - that courtroom reference again. "We are a wall," he replied, filling the word with very different nuances to that used by the public prosecutor. Speaking Spanish, he addressed himself to "all Spanish democrats, we appeal to them, because today, supporting self-determination is also supporting democracy in Spain." ANC president Elisenda Paluzie was the only one to give a rebuke - short but sharp- to the pro-independence parties. As she began her speech, she reflected that "if we had enacted independence, this trial would not be happening." In spite of this, she acknowledged that, thanks to the prisoners and exiles, "it is now much easier for us to explain ourselves to the world." A world that was, indeed, paying attention to today's actions. Sources in the protest organizers said the media interest was as big as for a Diada - the Catalan National Day on September 11th, when the movement attracts million-strong crowds every year. 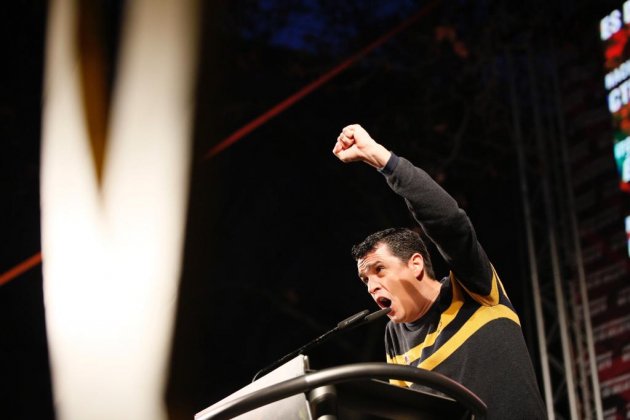 Also among this Saturday's speakers was a representative of the Madrid groups preparing to take part in the demonstration that pro-independence civil groups and political parties are planning for Saturday, March 16th, in the Spanish capital. He was one of the most forceful speakers and ended with a "We'll be expecting you in Madrid - no pasarán!" 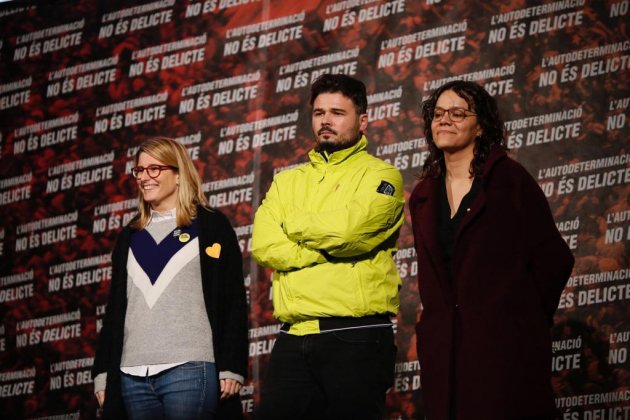 For the political parties, speakers were Elsa Artadi (JxCat), Gabriel Rufian (ERC), Natàlia Sànchez (CUP) and Joan Josep Nuet (Commons). In the case of Nuet, the MC noted that he spoke as one who was also facing "reprisal" - former parliamentary deputy Nuet is part of the group who will be tried for disobedience in a subsequent trial. Today, he recalled the figure of parliamentary speaker Carme Forcadell. 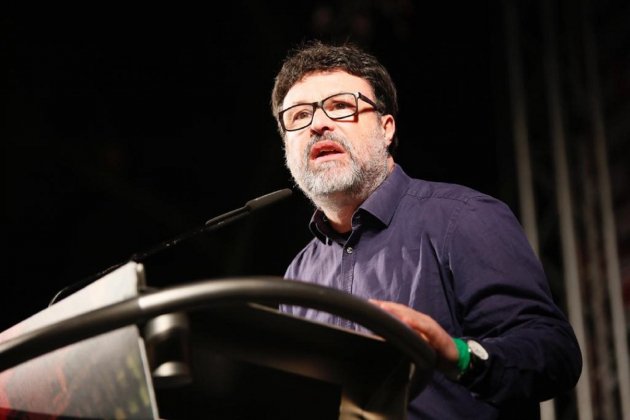 Rufian and Artadi also echoed the famous Republican phrase, no passaran. Minister Artadi directed her address to the President of the European Parliament, responsible for vetoing a planned conference by Catalan presidents Puigdemont and Torra, set for Monday. "President Tajani, you're a disgrace". Meanwhile, the ERC's Rufian sent his words to the Spanish right: the ultra-right VOX, PP and Cs, referring to the "the three horsemen of the apocalypse" and warning that "Catalonia will be their grave." 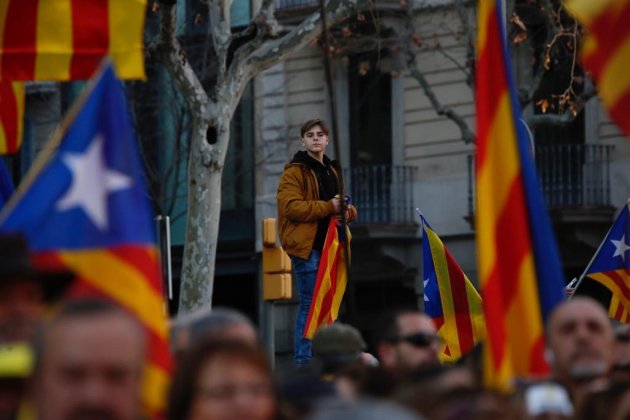 Between speeches and also during the march, the most frequently heard chants among the public were "unity", "freedom", "not one step back" and also "general strike." In fact, this last slogan was also the message given by the CUP representative Sànchez, and was in turn reinforced by the representative of the Intersyndical CSC trade union, which has called the one-day general strike across Catalonia for this coming Thursday, 21st February.

Today, the first chapter of this new wave of demonstrations, against the Catalan independence trial. Mission well accomplished. On Thursday, day of the strike, the street will speak again.