The Catalan president, Pere Aragonès, will lead the Catalan delegation at the upcoming meeting of the dialogue table with the Spanish state, whether or not the Spanish prime minister, Pedro Sánchez, turns up. Sánchez has not yet clarified if he will be there. Meanwhile, more pressure was added on Monday night as Junts announced it will not name its representatives until it knows whether Sánchez will be attending.

Pere Aragonès's position was confirmed by ERC spokesperson Marta Vilalta in a press conference after the party's executive meeting this Monday, in which she also said that the party would not understand if Sánchez decided to stay away, since he made an agreement.

However, Vilalta clarified that "the importance of the table is the existence of the table in itself", and recalled that "it was very difficult to get the Spanish government to sit down at it", adding that "they were forced to do so".

Vilalta said that it was quite clear who would represent the Catalan government at the table, but added that it was up to the executive to make the final announcement. In the same vein, she also confirmed that both cabinets are working on the date and time of the meeting and its content. In any case, she affirmed that the meeting should be next week. 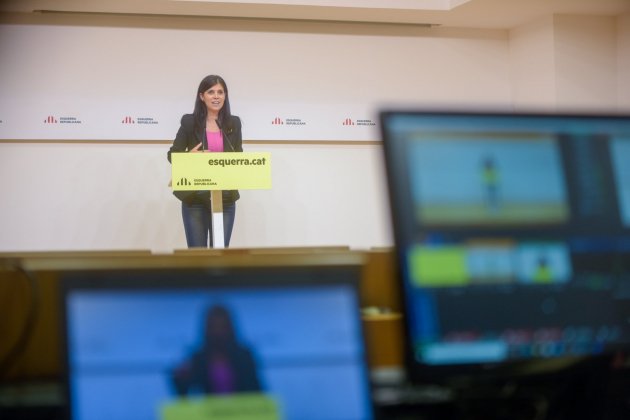 "To channel" the force of the 'Diada'

The ERC leader took advantage of the fact that this coming Saturday is the Diada - Catalonia National Day - to call for the strength shown on this day to be "channelled" into the dialogue table.

"At ERC we are convinced that it will be a Diada at which we can once again demonstrate the capacity to mobilize the independence movement. It is one of the greatest opportunities we have. We can show that the movement continues to exist and is strong," she claimed.

Vilalta insisted that the negotiating table with the Spanish state is "essential and necessary" to resolve the conflict between Catalonia and Spain, and insisted that this week, the September 11th activities "must be the best of preludes".

Regarding the statements made by the mayor of Barcelona, ​​Ada Colau, in which she stated that "it is clear that there is no basis for a referendum in the near future", Vilalta replied that "everyone knows that the key to voting is to able to vote, the mayor does to."

The ERC politician rebuked the Comuns for "so often disconnecting from this great national consensus and falling into political irrelevance." "Having mayors and ministries if you can't take any project forward is nonsense. Resolving the conflict is not nonsense," she concluded.

Expansion of the airport

With regard to the expansion of the airport, Vilalta reiterated the position already expressed by both her party and president Pere Aragonès himself, that no project will be carried out that damages the natural space of La Ricarda.

"We are in favour of being able to debate how we modernize this strategic infrastructure from here. Those who do not want to preserve the Ricarda space or explore alternatives are the Spanish government and Aena," she concluded.

The general secretary of Junts, Jordi Sànchez, this afternoon informed Catalan president Aragonès that his party will not announce the names of its representatives for the negotiation space until the Spanish government clarifies if the prime minister is to attend or not.

The Junts executive intended to approve the names of its representatives at the table today, in order to communicate them to Pere Aragonès. However, at the meeting, the doubts being maintained by the Spanish government on Pedro Sánchez's attendance were addressed with concern, as well as the possibility which has emerged this weekend of the meeting being postponed until after the holding of the Socialist party congress.