The two major Catalan pro-independence parties have held their first meeting this Friday afternoon to address the possibility of an accord to form a new Catalan government based on the outcome of last Sunday's elections. Afterwards, the Republican Left (ERC) and Together for Catalonia (Junts) both made statements emphasizing the importance of the victory achieved in the election by the independence movement and expressed the desire to deepen their talks.

In its statement, ERC said that the meeting had been very positive and that the new electoral scenario provided a "great opportunity" to begin a "new phase in the country". The Republicans' text does not go into more detail, however, and in line with the proposal for a broader-based government, with which they ran in the election, they say that "it will be necessary to stretch out our hands to more forces."

For its part, Junts also agrees in the positive assessment of the encounter, saying that they agreed to open "a new phase in the independence movement to take advantage of this historic opportunity provided by the elections." While ERC stresses the opening up of the agreement to include other parties, Carles Puigdemont's party has a different nuance, speaking of its "commitment to an agreement between the two parliamentary independence forces". 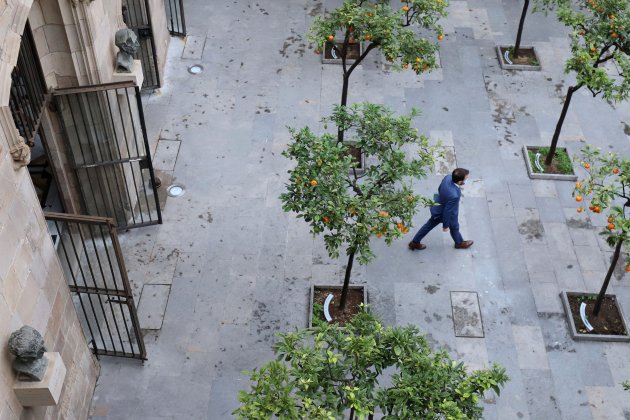 Pere Aragonès, ERC candidate for the presidency, in the Pati dels Tarongers at the Generalitat palace / Ruben Moreno

This is the first meeting between the two parties, after each of them had already met with the negotiating committee of the third pro-independence parliamentary party, the CUP. The Republican met them on Wednesday and Junts, on Thursday.

It comes after a certain tensing of the atmosphere between them, with the ERC spokesman in Congress, Gabriel Rufián, making a call on Wednesday to the alternative-left Comuns and the CUP to help shape a government, without including Junts. This sparked speculation about a Republican bid for a left-wing government, based on external support from the Catalan Socialists (PSC). This morning, however, ERC spokesperson Marta Vilalta told Spanish broadcaster RNE that she ruled out governing with the Comuns and using support from the PSC for confidence and supply votes.

The speculation had been fueled by the fact that, until now, Junts had not received any contact from ERC since election night candidate Laura Borràs spoke by telephone with the head of the ERC list, Pere Aragonès, to congratulate him on the result. ERC won 33 seats to the 32 of Junts.

On behalf of ERC, the president of the parliamentary group, Sergi Sabrià, took part in the meeting, along with spokesperson Marta Vilalta, national council president Josep Maria Jové, and the number two of the ERC candidacy, Laura Vilagrà.

In the main image, Laura Borràs and Pere Aragonès greeting each other this Monday at the doors of a radio station where they were interviewed / ACN