The polls were right when they predicted a three-way tie in the Catalan elections this Sunday February 14th. The PSC (Catalan Socialist Party), pro-Spain unionist party led by former Spanish health minister Salvador Illa, finished as the largest party in the parliamentary elections for the first time, in both votes and seats, with 33 deputies and 22.99% of the vote, with 98.77% counted. But it is a completely insufficient victory that leaves the second-ranked party, the pro-independence Esquerra Republicana de Catalunya (ERC) and its candidate, Pere Aragonès, closer to the presidency of a new Catalan government.

ERC, the Republican Left, tie with the Socialists at 33 seats, having captured a slightly smaller percentage of votes, 21.33%. And by a single seat, they also win the battle for hegemony within the pro-independence parties, over the third rival in the fight, Junts per Catalunya (Together for Catalonia). The Junts party led by the president in exile, Carles Puigdemont, with Laura Borràs as candidate, has come third with 32 seats, two fewer than in the 2017 elections, and 20.10% of the vote. For the first time, the pro-independence vote exceeds 50% in a Catalan parliamentary election.

The pro-Spanish union far-right party Vox, led by Ignacio Garriga, enters Parliament for the first time with 11 deputies. At the other extreme of the ideological arc, the left-wing pro-independence CUP, led by Dolors Sabater, more than doubles its results from the elections of December 21st, 2017, rising from 4 to 9 seats. The alternative left, En Comú Podem (Comuns), with Jéssica Albiach at the helm, retain the seats they had: eight.

Ciudadanos (Cs), who won the 2017 elections as the flag bearer for the unionist bloc at that time, suffered a debacle that went even further than the forecasts predicted: Cs party candidate Carlos Carrizosa held onto just 6 of the 36 seats that Inés Arrimadas won three years ago. Finally, the Popular Party (PP) - the main right-wing opposition party in the Spanish parliament - again struggled to save the furniture in Catalonia, finishing last among the parliamentary parties with three seats, one fewer than it won in the previous elections.

The PDeCAT, the pro-independence party which is heir to the former centre-right Convergència, with former minister Àngels Chacón as candidate, remained outside Parliament, although it obtained over 76,000 votes with 99% of the vote counted, which may have cost Junts a crucial seat in the duel with ERC.

With the data in hand, the pro-independence bloc (ERC, Junts and CUP) increases its majority, going from 70 to 74 seats in the new Parliament - the absolute majority is 68. Theoretically possible would be a centre-left majority formed by the PSC, ERC and the Comuns, which would also add up to 74 deputies. However, during the campaign, ERC, like the other pro-independence parties, completely ruled out reaching any agreement with the unionist PSC.

The magic 50% for the independence bloc

The pro-independence parties for the first time have exceeded the symbolic threshold of 50% of the vote in an election in Catalonia. The sum of the percentages of votes obtained by ERC, Junts, the CUP - which won seats - and the other pro-independence parties which remained outside Parliament - the PDeCAT, FNC and PNC - add up to 51.19% of the total votes, with 98.65% of the poll counted.

In the end, aside from the very visible safety measures at polling stations, the election day unfolded in a climate of total normality, despite the uncertainties arising from the coronavirus pandemic. By 10am, the time all polling stations were supposed to have officially constituted, 97% of them had opened successfully, the same number as in the previous elections. To be specific, 8,895 of the 9,139 polling stations. "We are in a framework of normality," said the minister responsible for electoral processes Bernat Solé when he gave his first press conference of the day. 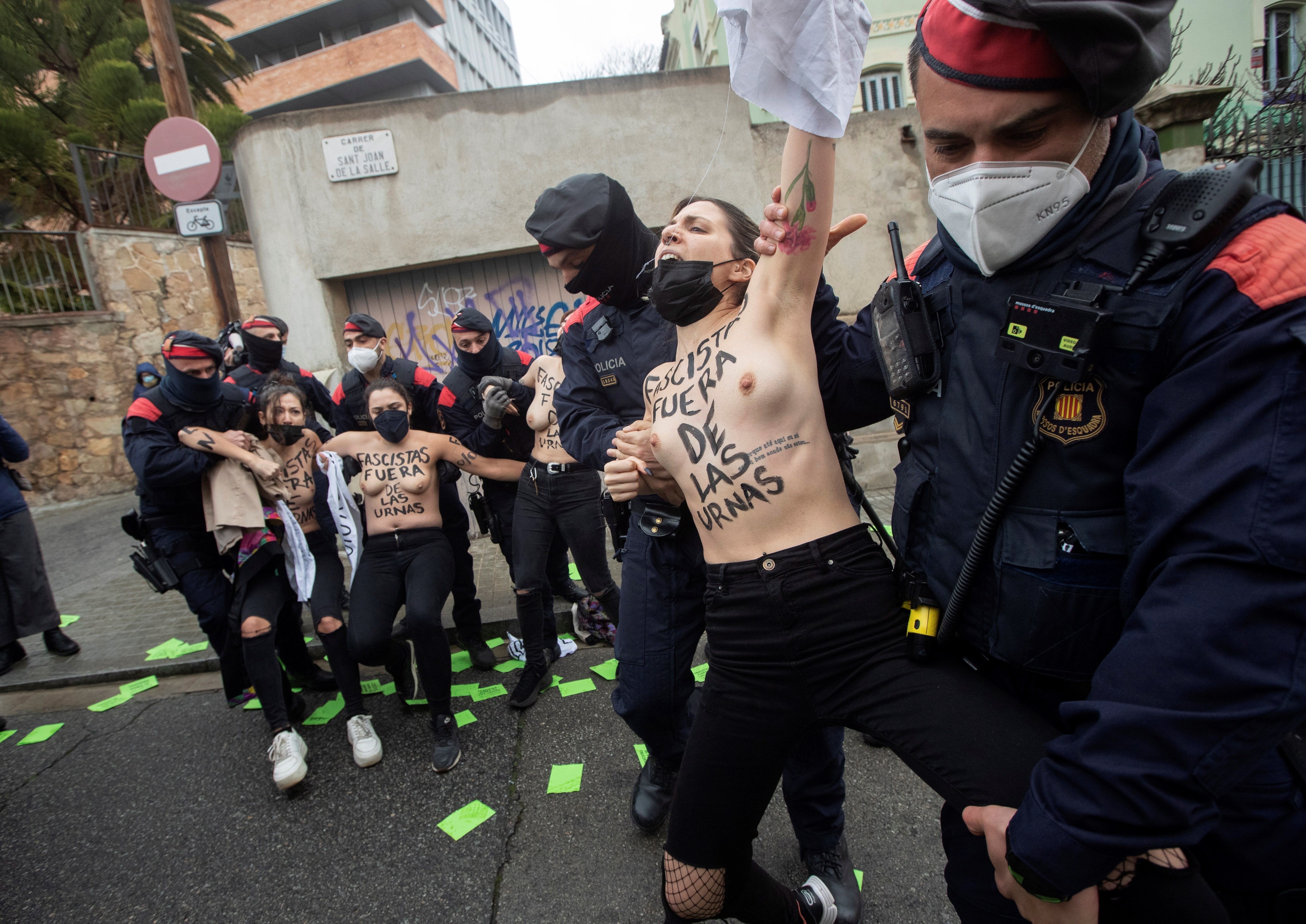 "Fascists out of the ballot boxes": police remove one of the Femen activists who protested in Barcelona against Vox candidate Ignacio Garriga / EFE candidate

Despite the pandemic, there were few incidents to break the calm of a normal election day. However, the candidate for the far-right Vox party, Ignacio Garrriga, was met by a protest from activists for the feminist movement Femen shouting "Fascists, out." The incident took place at a polling station in Barcelona's Sarrià district.

Given the difficulties, due to the pandemic, in constituting polling places with their staff of randomly-selected voters, there had also been doubt about whether the voting centres would have to remain open longer in the evening. Finally, the Electoral Commission decided not to extend schedules and all polling stations closed at 8pm as usual, with the vote count - which under some contingencies might have been delayed till Tuesday - allowed to take place as usual on Sunday night.