Spain's king Felipe VI and Catalan president Pere Aragonès had a cold and curious meeting this evening. The president's attempt to avoid his government remaining unrepresented at an important business meeting, but at the same time seeking to avoid anything like a formal encounter with the monarch, ended up provoking a forced greeting, which was witnessed by the president of South Korea, Moon Jain-in, leaders of the Catalan business community and some stand-out representation from the Spanish economic world. In return, Aragonès ended up taking part in an improvised photo to immortalize the moment, at the request of the monarch.

Aragonès presented himself at seven in the evening at Barcelona's Hotel Vela, where the meeting of the Cercle d'Economia business association was being held, but he did not attend the reception that at that moment was waiting for the king's arrival, where around forty of the representatives of the economic world had gathered, with the president of the Cercle, Javier Faus, at the head. Among those present, the chair of Banco Santander, Ana Patricia Botín, the heads of Telefónica, José María Alvarez-Pallete, Inditex, Pablo Isla, Banc Sabadell, Josep Oliu, and Grupo Planeta, Josep Creuheres, as well as the publisher of La Vanguardia, Javier Godó. There was also the leader of the PP, Pablo Casado, the leader of the PSC parliamentary group, Salvador Illa and the president of the Diputació de Barcelona, ​​Núria Marín.

The mayor of Barcelona, ​​Ada Colau, who had arrived at the hotel shortly after Aragonès, also stayed away from the reception, and waited with the president in an interior room. The press was able to observe the goings-on at the live reception because it was held on one of the terraces of the hotel, at street level.

Arrival of the king

The Spanish monarch arrived at a quarter past seven. After receiving the mandatory report from Mossos d'Esquadra chief Josep Lluís Trapero, he entered the reception and greeted those present, the usual formalities. The Korean president arrived twenty minutes later and the operation was repeated.

When the greetings were over and it was time to move on to the official photo and dinner, the door finally opened and the Catalan president and Barcelona mayor appeared on the terrace. So did two Catalan ministers, presidency minister Laura Vilagrà, and foreign affairs head Victòria Alsina. It was just at the moment when, after the greetings, the king and the Korean president were heading for the door together. Aragonès and the monarch came face to face almost immediately.

The greeting was cold, according to government sources, and Aragonès focused attention on a brief conversation with Moon Jae-in, through the interpreter. According to presidential sources, they talked about the historical relationship between Catalonia and Korea, investments by Korean companies in Catalonia and the visit that the delegation of Koreans had made.

Despite the frigidity of the moment - which was preceded by a long controversy in recent hours over whether or not the government would attend the meeting - the monarch proposed to immortalize the moment. "Shall we take a picture?" he proposed, according to both government and royal family sources. Aragonès stood briefly with the king, the Korean president, Spanish vice president Nàdia Calviño, and mayor Colau of Barcelona - as well as the president of the Cercle. 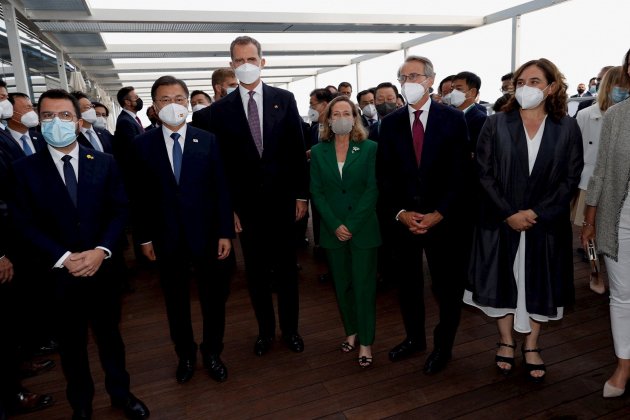 That was all the meeting that the monarch and the president had. Felipe VI went off to the official family photograph of the day and the Cercle dinner. Aragonès left, while Colau chose to take her place in the full photo of the event, and the minister Laura Vilagrà went on to the dinner on behalf of the Catalan government. 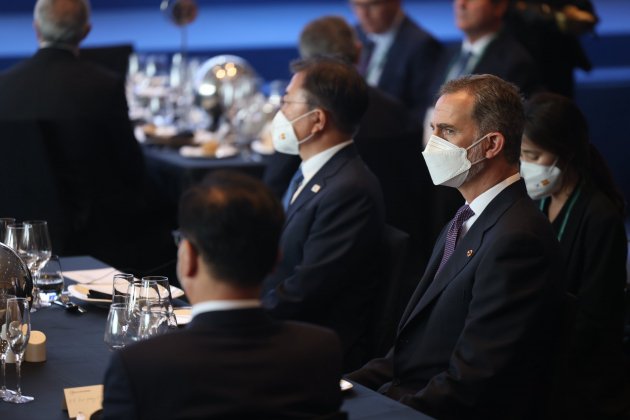 The speech by the monarch before the start of the dinner did not bring any surprises either. The Korean president, on an official trip to Spain, was the major focus. There was even the usual sideways reference to the political situation that the monarch usually introduces, with calls for unity. In his discourse, Felipe mentioned Spain 12 times, Barcelona 6 times and Catalonia twice.

In the main image, Pere Aragonès with king Felipe VI and the president of South Korea, Moon Jae-in / Efe